00:00 / 20:24
Spotify Stitcher
RSS Feed
Share
Link
Embed
This March, Tia Martinez and Jared Russell will celebrate five years of their label, Red Light Sound. Through trials and adversity, the couple has pressed on to showcase auditory art in limited-edition, analog pressings to generate a sense of the value of the music they help produce. Their purpose is to reclaim music as “more of an art piece in the actual product itself,” as Russell puts it. 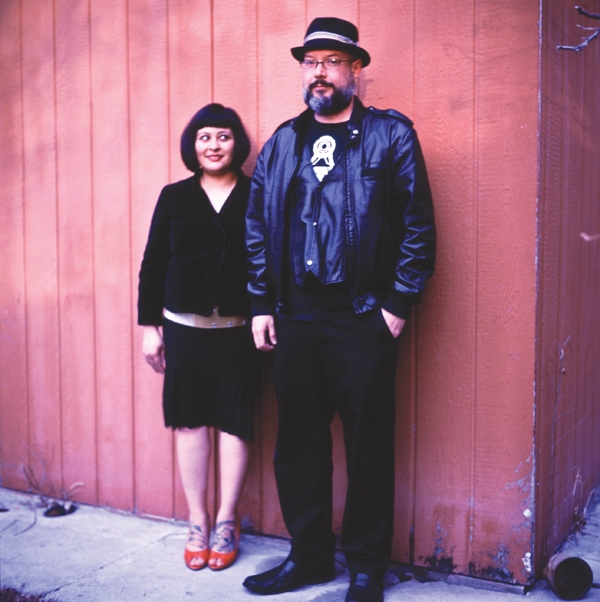 This March, Tia Martinez and Jared Russell will celebrate five years of their label, Red Light Sound. Through trials and adversity, the couple has pressed on to showcase auditory art in limited-edition, analog pressings to generate a sense of the value of the music they help produce. Their purpose is to reclaim music as “more of an art piece in the actual product itself,” as Russell puts it.

Martinez and Russell opened the doors to Red Light Books in 2007 on 179 E. 300 S., which gradually extended into Red Light Sound the following autumn. There, they sold various tapes, books and analog recordings of the shows they held in the basement of the shop, and began adding noise, black metal and other extreme experimental music to their label. Though it was difficult to make enough money to keep the store going, they pushed on and provided a space where artists, show-goers and “punk kids” could commune and celebrate fringe art—whether it be obscure noise tapes or a dead-baby art show. Unfortunately, the store closed in 2009 due to a combination of problems with the city. Attempts to re-open the shop in The Guthrie building were also thwarted.  “I was so heartbroken at that point,” says Martinez, which was the sentiment that led them to close Red Light Books.

Luckily, Martinez and Russell’s passion for Red Light Sound withstood the hardship, and they moved their label online. They henceforth found that the networking they had done was paying off, as one of their first online orders came from Thurston Moore for an AODL release. Russell says, “After we closed our shop and put our stuff online, suddenly it’s like, ‘Whoa, we’re actually … selling shit!’” The couple has persisted in putting out releases in a “slow and steady” manner. Once they released the split Eagle Twin/Night Terror 7”—right before Eagle Twin was signed to Southern Lord—they caught the attention of distributors: “People wanted to carry it automatically. It kind of got us in the door with some distributors,” Russell says. They initially released the 7” at $14 because of the glow-in-the-dark insert and its limited pressing of 200 copies; since copies have run out, they now sell on eBay for around $25, which evinces the material value of the work that Red Light has helped procure. Now, according to Martinez and Russell, Red Light Sound has distribution around the world, from Oakland to New York, and Canada to Finland to Israel, with plans of getting into Italy and the U.K.

The infatuating element of Red Light Sound’s growth is that they have maintained the DIY and artistic ethics upon which they founded the Red Light entity, and remain extremely selective as to what bands or projects they release on their label. Rather than seeking a specific genre, Russell and Martinez look to exhibit work that appeals to their specific tastes in much the same way as a gallery owner would select paintings that would represent the ethos of her space. Although Martinez contends that she generally likes harsh noise and that Russell is more of the industrial ilk, they find artists who stimulate their senses in an aesthetically subjective manner. Upcoming Red Light black metal band Koltum exemplifies their approach as Russell says, “[With] that band from Portugal, [Koltum], we heard them and immediately knew.”

What’s more is the quality with which the two aim to present the pieces they release under Red Light Sound. The label continues to release music/noise on seemingly dead media like tapes (and, to a lesser extent, vinyl) to highlight the temporality of music in its physical form, rather than the dispensability of blank CD-Rs. Martinez says, “When [we] sell a tape for 35 dollars and we sell vinyl records for 200 dollars, it keeps the value. It’s a physical form of something that can never be replaced. Once that record is gone, it is gone.” It’s an approach that requires their artists to be patient, as Red Light is “not mass-producing this,” Martinez continues. “We’re going to write a bio we want to send into magazines, we want to give this to people, have them buy it in the right process.” Additionally, Red Light always bolsters their sense of artistic sensibility with the visual artwork that accompanies their releases. Though their recent success has tentatively led them to putting their releases onto professionally made tapes and (possibly) moving from screen printing to professional printing, the inserts and bios will remain intrinsic characteristics that lend to the releases’ auras.

To celebrate five years of Red Light, Martinez and Russell will put out five official releases this year: a tape from Koltum; Detroit noise artist Liable for Abuse’s first vinyl 7”; a 7” from Russell and Cache Tolman’s dub-doom band, How to Kill; a new record from AODL; and a new record from Sex, Martinez and Russell’s collaboration; a combination of Russell’s Night Terror and Martinez’s Diamonds. The two separate entities also hope to release tapes on their own. Help support local art from Red Light Sound by ordering these—or any other releases—from redlightslc.com, or roll into Raunch Records, as Brad Collins is among the first to receive them for retail. Though it likely won’t be on Red Light, you should also check out Martinez and Russell’s new synthesized “party band,” Radio Club.