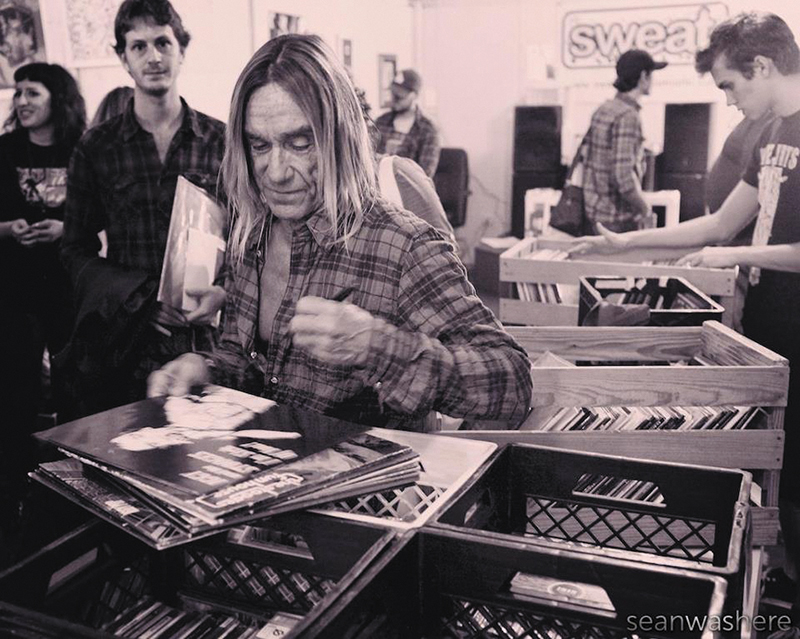 At the turn of the century, the music industry became too bloated to carry its own weight and quickly collapsed because it failed to see the future—a future where the consumer could get their music for free. Almost overnight, companies crumbled and corporate music stores evaporated. CD collections were removed from living rooms, stuffed in boxes and banished to the attic or auctioned off on the cheap at weekend yard sales. The physical connection to music was bleeding out.

The press had written the obituary: The record store was dead—attached to history like a speakeasy to be both remembered and forgotten at the same time. All was bleak, but all was not lost, reminded Carrie Colliton, Co-founder of Record Store Day. “We knew there were still record stores, and they were independently owned,” she says. “That was one of the reasons [independent record stores] were able to survive, is because when you are independent, you can be flexible, creative and nimble.” Record stores started selling skateboards, toys, comic books, T-shirts—whatever it took to keep the lights on. The goal was to keep inventory at a minimum, heads barely above the water line and the business one step ahead of turning into a Papa John’s franchise.

To understand where we are now, we must simply look to the past, before the bloat. CDs dominated the music-buying market. They arrived in record stores like a hostile takeover, pushing vinyl against the wall and eventually replacing them altogether. Now, the opposite is happening: Vinyl has found a revival, and with that revival, vinyl saved the independent record store. “The big story is vinyl,” she says. “That’s the format most associated with record stores now—and we’re cool with that. We’re not the only ones that helped the revival, but we’ve been around for 10 years, and the vinyl revival is about 10 years old. I don’t think anyone could make a case that we were not helpful and [that we were not] partially responsible for bringing vinyl back into the consciousness of the country.” Vinyl revitalized the retail market by giving the consumer a reason and a passion to own music again and not just to collect songs on the same device that they use to order pizza or call their mom.

It all started at an independent record store meeting in 2007 attended by owners, distributors and marketing strategists, including Colliton, who, at the time, ran a marketing coalition that worked to keep the record store relevant in a dying market. Colliton and others helped hatch an idea that would grow into Record Store Day. “We decided, ‘Let’s have a party—just try and get the press to notice that we’re there and we’re doing great, and we’re celebrating ourselves and our customers,’” says Colliton. “That is really all that day was intended to be: a big party to celebrate the people that run the stores, the people that shop in the stores and the people that make the music that they sell in the stores … Everything that we are doing goes back to our mission statement.” That mission has held over the last 10 years: “to shine a light, celebrate, promote, bring the attention of the world to the independent record stores and to drive traffic into them.”

For Record Store Day to work, they needed artists’ support, and in that first year, Colliton had no idea what that would look like. It turned out that artist support flooded in, and from just about every genre. “It is a tremendous way for an artist to be out front and say, ‘I love record stores,’ and to do it in a way that is unique to them,” says Colliton. In Year One, Metallica showed up to their favorite record store in the Bay Area and spent the better part of the day there in support. Recently, Amanda Palmer showed up to Newbury Comics in Boston and sat on the counter welcoming customers. Other times, artists showed up to judge barbecue contests, work the register, put out new releases or just provide testimonials. Josh Homme, Questlove, Chuck D, Iggy Pop, Ozzy Osbourne, Dave Grohl and Jack White have become ambassadors. Look for St. Vincent to be a big part of RSD 2017, as well as many other upcoming surprises and reveals.

The future is bright. Vinyl is far more than a temporary product of nostalgia. It creates jobs—new record stores are popping up across the country, and distributing companies and pressing plants are opening up and hiring people. Jack White has recently opened up Third Man Pressing in Detroit and plans to be a leading edge in modern vinyl production. It’s here to stay—and for a reason. “People are human, and they really want a human, physical aspect to things,” Colliton says. “You get that with vinyl.”

Record Store Day is now a yearlong journey. “We work to help stores have promotions all year long,” Colliton says. “Our goal is to keep thinking of creative ways to bring records into stores.” Commenting on this years’ event, Colliton says, “One thing I think we’ve gotten pretty good at is the goal of making the list to kind of match the diversity of the stores. I’m pretty psyched about this year.” Come out and support Record Store Day on April 22, and visit recordstoreday.com for more info.