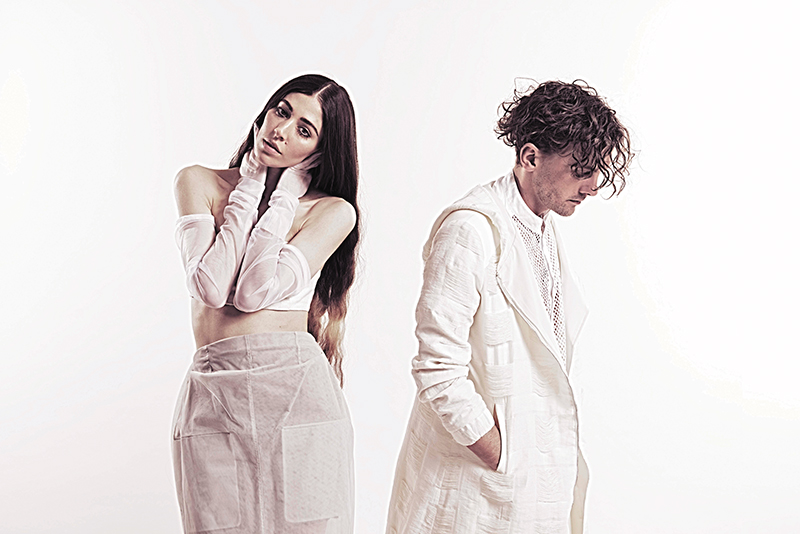 Chairlift: Moth to a Flame

It’s a jungle out there: one where predatory talent agents feed on former Disney stars and where Kanye West presumes that he is the lion. A domain once upheld by skill, drive and passion now subsists on autotune and the validation of strangers. The resources with which to create—let alone the nerve—are found somewhere at the bottom of the food chain. With the virtualization of nearly everything, the music industry has become more concerned with image than with impulse, but while the fittest survive—and perpetually selfie—there floats above it all a two-piece band whose hope is bound to the small, the weak and the blindly intuitive things. “I like to think about how the moth will sort of just fly into the light without worrying about what is going to happen to it,” says Patrick Wimberly, half of the Brooklyn-based Chairlift, “and if it is a fire, it is going to fly into the fire and it is going to burn its wings off, but it is still flying there with all of its …” —he pauses introspectively. “Instinct,” says bandmate Caroline Polachek.

Instinct, as it were, is the heartbeat of Moth, Chairlift’s third—and possibly best—full-length album. Effervescently primal and visceral to the bone, the LP is a beacon of composition and compulsion, quenching an artistic thirst while parching the current climate. Wimberly and Polachek are sonically fearless: Where former Chairlift albums take root in the conceptual, Moth errs on the side of the guttural—an evolution not lost on Polachek. “Moth is particularly unique of the three records because a lot of the songs [started as improvisation]—they started with a jam,” she says, “… and none of those [improvisations] started with any sort of visual or visual concept. It was really just sonic, like two kids playing with toys: ‘Oh, this sounds good! Oh, this sounds good! What happens if you do it this way?’”

Their lack of inhibition is likely intentional. (This is the group that first planned to make music for haunted houses.) Having been steeped in sonic flora and fauna for nearly a decade, Chairlift are used to weathering storms and fielding fame: They first made headlines with an iPod commercial that featured their song “Bruises,” the single off 2008’s Does You Inspire You: In 2010, they parted ways with Aaron Pfenning, an original Chairlift member who wanted to focus on a solo career. Three years later, they were hanging out with Beyoncé—Polacheck and Wimberly co-wrote and co-produced her track “No Angel,” respectively. The turbulence left Chairlift with a disarming self-awareness and a keen and silent endurance. In the dense Amazon of relevance, they have managed to clear a path all their own: assuming separate projects, taking their time between records and thus releasing their “most collaborative and most organic” attempt yet.

Chairlift recorded Moth in a makeshift studio in the heart of New York City—and you can tell. The album is a shifting sojourn of wanting to dance on a crowded subway platform and then reflect alone in an alcove on 68th. Igniting like a flame with “Look Up,” Chairlift’s electro-pop soundscape blossoms to symphonic fruition as Wimberly experiments with Asiatic strings on “Ottawa to Osaka,” buoyed horns on “Ch-Ching” and distorted synths on “Romeo.” His chiming canopies are permeated only by Polachek’s harnessed inflection, more corporeal than ever before. After realizing that her Björk-like dins could potentially strain her vocal chords, Polachek trained with her former opera teacher to help preserve them.

While Moth’s natural tendency is to glow lyrically and compositionally, the album is also a stunning display of Wimberly and Polachek’s compatibility. Her words are sensitive; his sound is brazen. Her voice is an instrument; an instrument is his voice. “There is a reason why we are together,” says Wimberly. “We have strengths and weaknesses—we know how to play off of them, and we like writing together.” Before there was Chairlift, there was a mutual admiration—a key to their success, according to Polachek. “I am a fan of Patrick’s sound in general, and Patrick is a fan of my composition,” she says. “It just sort of works.”

At once animalistic and refined, Moth is masterful. Of what he hopes their fans will take from the album, Wimberly says, “I like to think that people can learn—not learn to let their guard down, but actually let their guard down.” Although the descent of the music industry is nigh and our origin of self-worth is simulated, bands like Chairlift—that laud vulnerability, respect impulse and are bereft of pretense—will slow if not stop the digression. They are the two kids playing with toys, the monarch with singed wings. In a kingdom where the feigned and virtual are sovereign, there is still room for Chairlift: constantly moving, resiliently living, drawn to the light.

Chairlift are playing at the Urban Lounge March 28. Learn more about them at chairlifted.com.