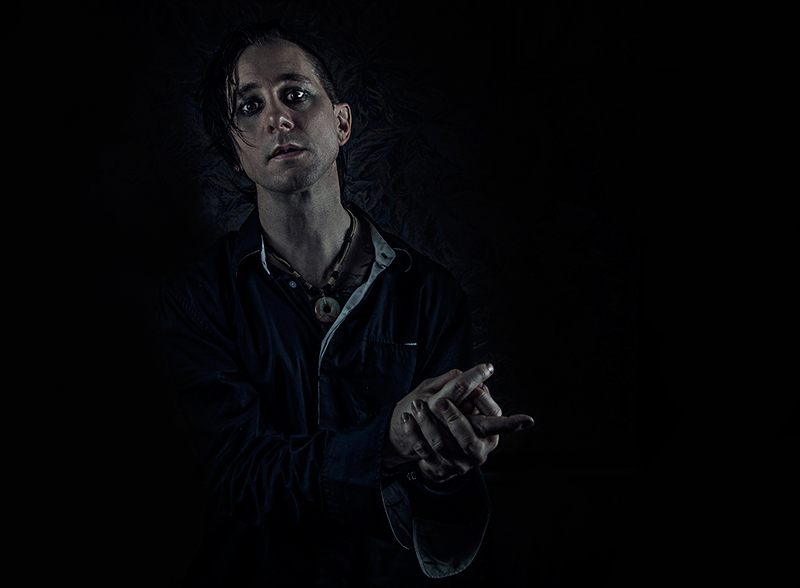 When it comes to industrial music, we are all part of an eclectic tribe. We are branches and leaves on the same musical tree. This message became clear to me as I spoke with Chant’s Bradley Bills. I had heard about him through an amazing performance artist and caring mutual friend of ours named Colby Watkins. Bills and I talked about music, friendships, mentors and inspiration. I was amazed to hear the amount of reputable artists he has worked with since the creation of Chant. Some of his branches included the New Orleans–based extreme performance artists Pain Tribe, Evil Mothers, Die Krupps—he has even co-written a track with of Martin Boews of Attrition and Martin Atikins on Pigface 6. I was grateful he paused to give SLUG a few minutes of his time.

Luckily for us, Bills encountered a severe, incurable case of the drum bug during his teenage years and he has used it to create tribal industrial for our listening pleasure. He admits he was all about the drums for almost a decade and never planned on learning how to sing and write music early on. It was not until he started a new branch of his music career, which was drumming for bands, that this progression took place. “When it became time to do my own project Chant, it was meant to be a drum project, something to promote my drumming to other bands,” he says. “It became my voice, it became a great creative outlet for me. Doing an instrumental tribal drum show wasn’t enough, so I learned how to program music and doing that lead to vocals.”

Bills’ music has been influenced by classic prog rock bands like Yes, Rush, Genesis and Pink Floyd. He also enjoys the newer, heavier bands like Tool, Metallica and Slayer and the extreme performances and tribal music of the band Crash Worship. “Around 1992,” he says, “a friend of mine handed me a VHS tape and said ‘you got to see this.’ It was Ministry—In Case You Didn’t Feel Like Showing Up—and with its double drumming, I was hooked.” This retro sound of industrial is one of his main influences still when he plays with Chant. “That age of industrial was more of a punk rock attitude and people made music out of things you were not supposed to make music out of,” he says. “There is something about that type of industrial.” He adds, “What I like to play and what I like to write is more aggressive, more punk and more experimental if you will and that is what I view industrial as.”

As Bills was contemplating the next step for Chant, he started working and touring with KMFDM. During the interview, he repeatedly showed great gratitude and appreciation for Capt’n K’s efforts of believing in his talents, helping to revive Chant and get the project on its current path. Capt’n K had shown interest in the third album, and he asked about remixes. “The only reason why I had not done any was because I felt my skills were not there,” Bills says. Capt’n K encouraged him with the “you just need to get in there and do it speech” and from there, Bills was once again inspired to further his career even more. A phenomenal remix for the Salvation EP was the result of this and has led to more remixes requests which Bill’s will attend to when returns home. Bills is fortunate to still remain in control of his own music while being on WTII Records and feels it is a great position to promote the music. He is wanting to do a remix contest for his own music. So for all of you younger aspiring musicians you may want to keep your eye out for that. Chant releases an artistic, limited-edition version of every album, and for Brave New Apocalypse this came in the retro form of a cassette tape. “Every generation has a subset or cult,” he says. “They use something like religion that is supposed to be sacred and use it a marketing tool to get revenue for their churches or organizations to get revenue from it.” He goes on to say, “We thought it would be really cool to develop a motivational pamphlet cassette promoting people to listen to our new message about a brave new world.” Some of the things you will find on the cassette are not on the album, and it will direct points you to secret areas where you can get more art.

With a third live member, triple drumming, a full-forced light show and stage production Chant has evolved fully into Bills’ vision. “It doesn’t really give anyone a chance to take their breath and that’s what we wanted,” he says. It is a very powerful performance that will pull you in. Be sure you catch it on Aug. 18, at the Urban Lounge. Chant and Inertia will be supporting industrial legends KMFDM.