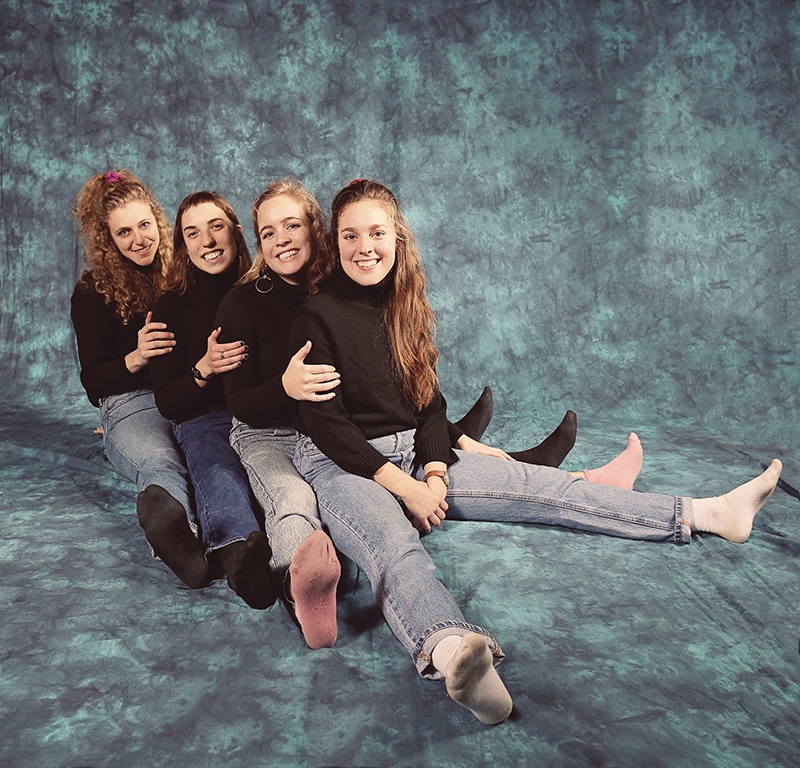 Chastity Belt: A Quartet of Cool Sluts Out on Tour

The title to this interview isn’t meant to be a jibe, but a reference to the Chastity Belt song “Cool Slut,” where lead singer Julia Shapiro sings about the lifestyle of “a couple of sluts / out on the town / fooling around.” It’s an honest, casual, and necessary anthem for any girl that’s ever, you know, liked sex in a really indifferent way. A lo-fi-ish rock four-piece from Seattle with college town roots, they’re currently on tour in support of their newly released second album Time to Go Home.With compelling lyricism and casual angst, they hammer out impressively jabby riffs with beachy, grungy style and clean fresh vibes of DIY construction to keep it all approachable. And approach you can, when Chastity Belt plays Diabolical Records on the 27th alongside locals Chalk. An interview with bassist Annie Truscott covers how they’re feeling about their progress as a band, their new label, and just having a good time with their music.
A young group of friends with a repertoire of funny party songs (about vaginas, chips and dip, pussy n’ weed n’ beer) and achingly self-aware pieces (think those sad, slightly drunk, existential moments), their music spans a youthful, bright melancholy that feels incredibly relatable and familiar. “We [don’t] put too much thought into how we want it to sound necessarily,” says Truscott. “I think we’ve just been progressing towards this sound naturally.” Working to explore this more with a move to label Hardly Art and to the bursting-with-tunes scene of Seattle, there’s plenty of progress for Chastity Belt. This progress obviously includes music that’s only growing to be more impressive and emotionally complex. “I think it got a little more serious, because we weren’t playing songs for college students, we were playing songs for a more serious audience,” Truscott says. “We didn’t have a very good music scene in Walla Walla, but a lot of our friends’ bands [in Seattle] were really inspiring and influential in our song-writing and coming into our own.”
Friendship seems to be a major factor for them, not just with their supportive Seattle community, but with their new label. Hardly Art, home of bands like Hunx and His Punx, La Luz and Seapony, in addition to being great to work with, have established a bond with Chastity Belt. Truscott says the relationship with them has not only been supportive but that their work with Hardly Art has been so great because “They’re so close to us. They’re from Seattle and we’re pretty good friends with the two people who run it, we hang out with them on the weekends. It’s pretty clear that they like our music and feel supportive and genuine about it—they wanna be honest about it.”
Even when faced with the dire annoyance of being pigeonholed as an “all-girl band,” Truscott again illustrates that their music isn’t bogged down by it, or created in spite of it. Even with lyrics riddled with playful feminist themes, Truscott says, “It’s just having fun, but we do wanna be taken seriously.” During the interview, she pauses to ask her bandmates what they think about this phenomenon and after a short silence, comes back with a laugh and says, “It’s pretty lame.” Though this answer is as real and concise about the female music experience as it probably gets, she also says that “Usually, people will label everything. Being four ladies, we’re gonna get called that, frequently, and it’s frustrating that that’s still a thing that people say. I mean, I try not to let it get under my skin too much. We’re just some ladies doing our thing, you know?” An understatement that sums up their low-key style, catch the show and go watch them do their thing at Diabolical.
Photos: