SLUG: If you were playing basketball with President Obama and you had the opportunity to dunk on him, would you hesitate to do it out of respect for the office? RiFF RAFF: I would super dunk 370 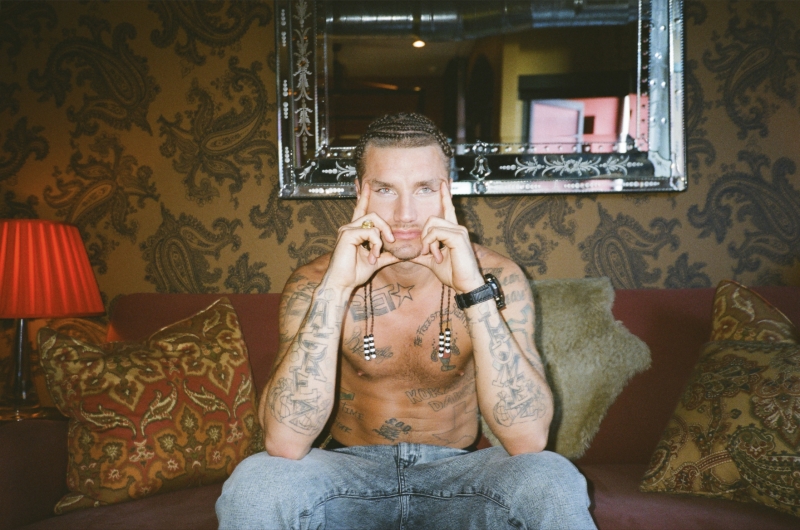 "My album will put the haters to sleep like codeine they will have promenthazine dreams." Photo: Dan Monick

Earlier this month I had the rare and precious opportunity to interview one of the world’s most iconic musicians, the one and the only, RiFF RAFF. Naturally, the interview was conducted over email, which is to be expected, as a man of this stature would never be caught dead engaging in live discourse with a slopsucker like me. That said, it is possible that there are still some of you who’ve never heard of him. Should that be your situation, dear reader, let me first of all express my condolences to you for what must be an intolerably dull existence. Second, allow me to clue you in (don’t worry, your oblivion will be our little secret).

RiFF RAFF is much, much more than just a musician, he is a savior to all things sublime. Nevertheless, I have spent an imprudent amount of time listening to RiFF RAFF’s music and I can tell you, he is quite easily the world’s most invincible Caucasian rapper. His 2012 mixtape, Birth of an Icon, literally changed the course of human events much in the same way Superman did when Lois Lane died and he was forced to take drastic measures to rectify the situation. RiFF RAFF too has been compelled to manhandle popular music in much the same way, in order to save it. Take his classic tune, “Dion Sandals,” where Mr. RAFF explains that he is the, “rap game Julio Franco, Chuck Norris Texas Ranger / So much ice on my fingers look like I slap boxed a penguin.”

Next month, RiFF RAFF will release his much-delayed debut album, Neon Icon, on Diplo’s Mad Decent label. It will feature production by some of the biggest producers in hip-hop and beyond: Lex Luger, Noah “40” Shebib, Skrillex and DJ Mustard. Judging by some of the track names, “Kokayne,” “Versace Python,” “Aquaberry Dolphin,” and “VIP Pass To My Heart,” I’m guessing we can expect many more special things from RiFF RAFF. In our interview we discuss his new album, his dreams for the future, but most importantly, the late, great, Macho Man Randy Savage.

SLUG: How is your day going?
RiFF RAFF: Excellent like an egg salad sandwich

SLUG: Anything interesting happening on tour? If so what?
RiFF RAFF: No it’s just like a normal tour with the tour folks floating around thru tourville

SLUG: When you were a kid what kinds of things did you envision yourself to be when you grew up?
RiFF RAFF: I wanted to be the male Madonna and sing and play for the Oakland A’s

SLUG: When did you know you wanted to be a rapper? How did that realization come about?
RiFF RAFF: I just wanna be rich

SLUG: How do you feel about your new record? Tell me as much as you can about it…
RiFF RAFF: So many hits I just wanna be on the billboard and be rich

SLUG: What’s the most important thing to keep in mind when someone wants to make a great record?
RiFF RAFF: Make sure to put me on the hook and don’t try to get my verse for free

SLUG: Do you think your new record will finally shut the haters up once and for all?
RiFF RAFF: My album will put the haters to sleep like codeine they will have promenthazine dreams

SLUG: I sometimes feel like you aren’t taken as seriously as you should be (especially in the press). Do you think you’re misunderstood, and if so, why??
RiFF RAFF: I don’t care if people take me serious either u are a Baller or u aren’t it’s not my fault if u sucks

SLUG: Where do you find inspiration?
RiFF RAFF: Galaxy

SLUG: Tell me about a moment or an event in your life after which you knew nothing would ever be the same.
RiFF RAFF: When neon icon drops

SLUG: So I hear you’re dipping your toes in country music now. Tell me about that.
RiFF RAFF: That’s always been even my first song I even write was Time and that was 5 years ago

SLUG: You’ve done an incredible job of branding yourself, some might even say you are a brand. What are your thoughts on the commercialization of America?
RiFF RAFF: I am the Neon Icon JodyHighroller.com

SLUG: Have you ever been in love? Tell me about the greatest love of your life.
RiFF RAFF: JodyHighroller.com I love that website

SLUG: What is a normal day in the life of RiFF RAFF like?
RiFF RAFF: I go to JodyHighroller.com and order all the sandals

SLUG: Who do you look up to (who are your idols?)? Why do you admire them?
RiFF RAFF: Jose Canseco x Madonna x Macho Man randy Savage

SLUG: I feel like you’re poised to branch out in the entertainment business. What does the future hold for RiFF RAFF?
RiFF RAFF: Billions of Dollars

SLUG: What do you think a 70-year-old RiFF RAFF would be up to?
RiFF RAFF: I don’t think that far ahead dude calm down

SLUG: Have you ever considered being a Mormon? Would you consider being a Mormon if they still practiced polygamy?
RiFF RAFF: I could see myself having 10 wives but I wouldn’t tie myself to a religion

SLUG: What things would you say you’re an expert at?
RiFF RAFF: Being a dad to JODY Husky

SLUG: Is there such a thing as too many women in your life?
RiFF RAFF: Yes

SLUG: What sort of things do you invest your money in?
RiFF RAFF: Jewelry & food

SLUG: Why neon? Why not pastel?
RiFF RAFF: Pastel is cool too

SLUG: What’s the meaning of life?
RiFF RAFF: I don’t know but Fear & Hope & happiness are all around and all u can have is Hope that u will be eternally happy and get what u want at all times without fear ever.

SLUG: Did you call your Mom on Mother’s day? Do you ever get the sense that she’s worried about you?
RiFF RAFF: I don’t talk to the public about my people

SLUG: What is the most perilous thing in your life? What scares you the most?
RiFF RAFF: That if I spin in a circle then my ice will cause a Snow Storm in New Hampshire

SLUG: If you had the afternoon to chill with Vladimir Putin, what do you think you guys would do?
RiFF RAFF: Who is Vlade Divac ?

SLUG: If you were playing basketball with President Obama and you had the opportunity to dunk on him, would you hesitate to do it out of respect for the office?
RiFF RAFF: I would super dunk 370

SLUG: What’s the most important thing in your life?
RiFF RAFF: Comfort

SLUG: No bullshit. Is RiFF RAFF a persona, or this really who you are?
RiFF RAFF: The fuck kinda question is that

SLUG: Do you feel like anyone really knows you? If so, who?
RiFF RAFF: Yea my friends and me

SLUG: Is it lonely being RiFF RAFF?
RiFF RAFF: Only when I eat sushi

SLUG: Some people would say your 15 minutes should be up by now. What would you say to those people?
RiFF RAFF: Why the fuck would I even have to answer that
u still askin me questions ain’t u
and I better be on the cover or I ain’t doing another interview with y’all