00:00 / 20:24
Spotify Stitcher
RSS Feed
Share
Link
Embed
I first encountered Brooklyn’s Xray Eyeballs last October during CMJ. Moments before they took the stage, I met lead singer and guitarist O.J. San Felipe as he was trying to sort out the bar tab for his band. I asked what band he was in and he enthusiastically responded “Xray Eyeball!” with a noticeable accent. Five minutes later, he and his three stunningly beautiful band mates (San Felipe is currently the only male member of the band) took the stage. 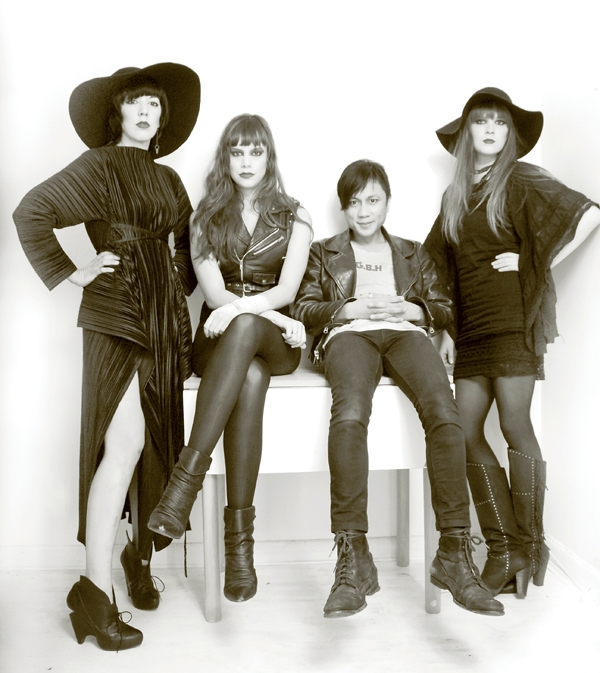 I first encountered Brooklyn’s Xray Eyeballs last October during CMJ at the Mercury Lounge in New York City, opening for Dum Dum Girls. Moments before they took the stage that night, I met lead singer and guitarist O.J. San Felipe as he was trying to sort out the bar tab for his band. He seemed discouraged when the bartender told him that the tab was for band members only, and that he couldn’t order more than one drink at a time. I asked what band he was in and he enthusiastically responded “Xray Eyeball!” with a noticeable accent. Five minutes later, he and his three stunningly beautiful band mates (San Felipe is currently the only male member of the band) took the stage.

Although their half-hour set suffered from some sound problems, I was surprised by how upbeat Xray Eyeballs were onstage, how much fun they looked like they were having and how little material was played from their debut album, Not Nothing. That album featured eleven mellow, dreamy pop songs, but unfortunately, at times they blended into an indiscernible mash. Turns out, by the time I caught them live, they’d solidified a new line up, adding Liz Lohse on guitar and synth, Sarah Baldwin on the drums and had just finished recording their second (and then unannounced) full-length album, Splendor Squalor. “We started playing [the songs from Splendor Squalor] right around the time you saw us. They were fresh. We ironed out most of those songs while we were recording,” says San Felipe. Splendor Squalor was released on Feb. 28 on Kanine Records.

While Not Nothing was filled with gloomy goth influences and songs that sounded very similar, Splendor Squalor kicks things up a notch for the band. The songs are catchy and remain distinguishable from one another. The songwriting is more intelligent and, with Lohse playing synths, the ’80s new wave influence is more apparent. Carly Rabalais, who helped found the band with San Felipe, has a more prominent vocal role, too, harmonizing regularly with San Felipe throughout the album instead of simply singing backup. Rabalais and San Felipe both agree that the line-up changes over the past year have helped create a better dynamic for Xray Eyeballs. As soon as the driving drum beat of “Four” opened the new album, I knew Xray Eyeballs had something new and exciting to offer. Although the goth undertones are still present on Splendor Squalor, the garage rock influence moves to the forefront. In the early days of Not Nothing, San Felipe often described Xray Eyeballs’ songs sounding like dark lullabies about sex and drugs. He says the new material is more like “candy-coated Vicodin.”

Although the band has already been performing the songs from Splendor Squalor since last October, by the time they hit Austin in March for SXSW, I’m sure they’ll have ironed out the kinks. It’s the second year in a row that the band will play the SXSW music festival.  “Last year it was fun. It is always fun there,” San Felipe says. “The food, friends … Cheer Up Charlies is a really awesome parking lot. The best thing about Cheer Up Charlies is there is a parking lot next to it filled with food trucks. That’s where I hung out a lot [last year]. I think I must have sampled all the food trucks.”

This year, the band has a packed schedule—eight confirmed shows thus far—which include a plethora of parties and showcases throughout the six days. San Felipe says they are excited for all of them, but the Hardly Art/Sub Pop showcase, the Spider House Party  and the Panache Hangover Party are some of the most anticipated.

Although the band currently has no plans to tour through Salt Lake City, they’ve been here before (opening for Quintron at Urban Lounge) and are open to the idea of coming back. “There was a guy [when we played Salt Lake City last time who] brought his own light show. He let us crash at his house and he had a continental breakfast for us. It was a Mr. T Pez dispenser surrounded by Cheetos. It was amazing.”