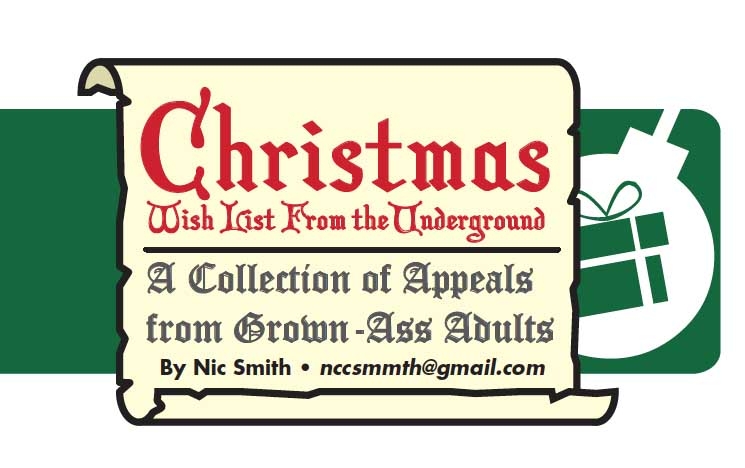 Christmas Wish List from the Underground: A Collection of Appeals From Grown-Ass Adults

Remember when you were young and anxious, desperately propelling yourself up from the tile floor of a shopping mall with your toes just to glimpse the red mess of a man who, according to your sources, planned on hooking it up big time? We remember. That’s why SLUG recently sat down with a handful of members from Utah’s underground music community and asked them some irresponsibly Christian-based questions about what they want for Christmas this year. Let’s all imagine that, you know, this man had actually been a magical version of grandpa, and not some third-string King Lear who earns a little extra on the side by asking small children to surrender their earliest consumerist fantasies directly into his ear hole.

Bischoff is a musician, local promoter for Exigent Records, and believer in helping local artists ascend to the level of national visibility. As a founder of the annually celebrated CrucialFest, Bischoff’s Christmas wish is to receive an airline sponsor for his festival so that more artists can travel westward and participate in the experience. Alternatively, he bargains, a speed rail to and from San Francisco or Seattle would suffice. The most important musical gift he’s ever received was a mixtape from a friend while he was in high school. This tape, he says, expanded his musical tastes outside of his strictly punk preferences, and led him toward many of the influences that he carries today. This year, he plans to give back by handing out free gear from Exigent to local record shops.

When Copelin moved to Salt Lake City four years ago, she landed her first job here with Randy’s Record Shop and has been hard at work ever since. However, you might know her better as the killer bassist for local garage-goth band JAWWZZ. To date, the best gift that Copelin has ever received was a childhood keyboard that springboarded her interest in composing music. Although, if Copelin could have anything for Christmas, she says that she would enjoy possessing a fraction, if not the entirety, of Glenn Danzig’s esteemed 8-track collection, along with some one-way streets in this widely planned town. If she could give one gift to Salt Lake City, Copelin would neatly tuck Slayer’s Reign in Blood into the stockings of families all across the Wasatch Front.

Goldring has been playing music in Salt Lake City since he was 12 years old. Aside from being the frontman for Great Interstate, Goldring has also played significant roles in other great local bands such as Golden Sun and Your Meteor. In the last three years, Goldring has also spent his time recording and producing music for many other artists in the Salt Lake area and loves the community here. For this holiday season, Goldring says he would be content with a preamp and maybe one solid winter musical festival to combat the slowly approaching chill of these next few months. However, as cheesy as he thinks this sounds, Goldring says that he’s fulfilled enough with the relationships he’s built over the years with all the musicians he’s worked with in our community. Great Interstate has denied the making of a Christmas album per se, but they are releasing an EP very soon. So, he hopes, maybe that counts as a gift.

Johnson has been a concert promoter and community activist in Provo since 2008 when she began working alongside Corey Fox at Velour. As a proud member of the scene, Johnson says that if Provo needs anything this year for Christmas, it would simply be more support for all of the talented and dedicated artists growing in her town. She’s immensely thankful for all of the new music that comes across her desk every week—from new vinyl and demos to the chance of booking the city’s up-and-comers. For her own Christmas wish, Johnson says that she strives to assemble the perfect concert (or even festival) which showcases the best Provo has to offer. On a related note, Velour is hosting a Provo All-Star Christmas concert on Dec. 20, and she invites everyone to come and participate.

Even if your patronage to local music concerts is on the slim side, chances are that you’ve seen musician and composer David Williams onstage with one of the many distinct groups of which he’s a part. In addition to being a performance veteran of Salt Lake City, Williams is also a teacher and musical instructor to several students in the valley. To this day, he says, no one has ever asked him to teach them any of the myriad commercially available holiday tunes. This surprises him, but, then again, no it doesn’t. For Christmas this year, Williams proposes that Santa use his skills in magic to virtually eliminate all forms of suffering throughout the universe, which obviously includes the installation of a new legislature in Utah. After that, he says, a fresh touring van would be pretty sweet.