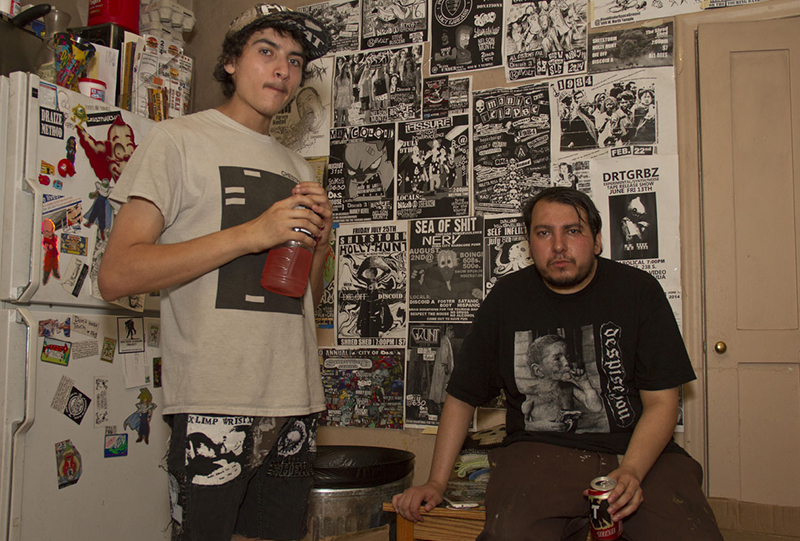 Noise Not Music: City of Dis Just Says No To Music

I’ve known Sam and Conrad for almost five years—well before they delved into the abyss of recording and releasing music (theirs and others’) via their somewhat understated label, City of Dis. As Sam explains, “‘City of Dis is a reference to Dante’s Inferno … and the fact that we like ‘Dis’ music.” For the unfamiliar, “Dis” music is generally D-beat, uptempo punk, often crossing over to metal, for which many credit the band Discharge with starting, hence the “Dis.” The label’s output is impressive, if for no other reason than the sheer volume of ideas these two end up releasing. From the beginning, Sam is adamant about the fact that the two did not want to start a label because, according to him, “It’s a giant pain in the ass. You gotta work on stuff, schedule stuff, put stuff together. … It’s pretty terrible.”

Before Sam and Conrad had even the first thought about starting a label, they started playing music, if “music” is really the correct term. “We just started out playing fast and noisy,” says Conrad. “Sam couldn’t even play a bass when we first started, but it was all about playing as fast and making as much noise as we possibly could.” Both have progressed at playing music, and both are multi-instrumentalists, if one can refer to them in that manner, but they have remained true to playing stuff they want to play—stuff they want to hear.

Thus far, City of Dis has mainly released music from Sam and Conrad’s own projects, including Discoid A and Nelson Muntz, and they both seem to start new projects almost daily. “We try to get as many people involved with the label as possible,” says Sam, “but nobody wants to be involved.” His reasoning is that nobody really fits with what it is that the label and Sam and Conrad personally are trying to achieve, which is making and releasing as much noise as possible. They have worked with bands aside from their own in the past, but they haven’t worked out for the best, according to the duo. “We just decided that, since we were sitting on a bunch of stupid ideas,” says Sam, “we should go ahead and start a stupid label to release our stupid ideas on.”

“We started out just releasing stuff on the Internet,” says Conrad, “but then we got a spool of CD-Rs and released a bunch of stuff that way.” After the spool of CD-Rs disappeared, the two jumped to cassette releases. “We dub the cassettes one by one, by ourselves,” says Sam, “and we do all the inlay cards up at Kinko’s … They hate me.”

The recording techniques are what have progressed the most, according to Sam. “The releases have started to at least sound better over time,” he says, “even if the music still turns people off.” Not only do they combine new-school release methods (the Internet) with old-school release formats (cassettes), but Sam generally does all of the artwork; the two combine input on layouts; and they limit the hell out of physical releases—not necessarily by choice, though. “Sometimes we just dub cassettes off for people that ask for them,” says Conrad. Sam expands on Conrad’s thought: “For the DRTGRBZ release, there are 22 copies,” he says. “I’d do more, but nobody has hit me up for them.” Their most grandiose goal is to release a Nelson Muntz 7” at some point, and they have just released a Nelson Muntz demo: not exactly the “Big Time,” if you will. They’re also working on releasing a Demos cassette, compiling earlier releases from bands such as Steve Buscemi, Harvey Keitel, Oroku Saki and Jennifer Connelly—the two certainly have a good time poking fun at celebrities while producing interesting stuff under each tag.

According to both Sam and Conrad, they don’t really “have anything” here in Salt Lake—no family, no friends, no future—your standard punk ethos. However, the two are quite serious about this. “Since we really don’t have anything here, in addition to the label, all we do is start new projects and book shows for bands we want to see that generally wouldn’t stop here,” says Sam—not that they experience huge turnouts or garner new followers. “It’s a good feeling, you know?” says Sam. “We like releasing our stuff because we like to listen to our projects, and we like booking shows because the bands we get to come here are bands we want to see, even if nobody else cares.”

Additionally, the two have made a decent amount of out-of-state contacts since they began the label and started booking shows, but neither will cop to the label growing or attendance at shows being anything more than minimal. In Utah, there is a noticeable, albeit somewhat small, group of people who support City of Dis, and it’s not uncommon to see a shirt of one of the City of Dis–related bands floating around the city on the back of a fan on any given day.

At the end of the day, the two aren’t trying to be poster children for the D.I.Y. ethic—they’re simply doing what they want to do, how they want to do it. They don’t make money, they don’t care about “scene status” or who they know, and they don’t limit themselves in what they play, what they release or the bands they book. “We’re not doing anything else with our lives,” says Sam, “so we may as well make terrible noise, put out terrible stuff, and book terrible shows.”