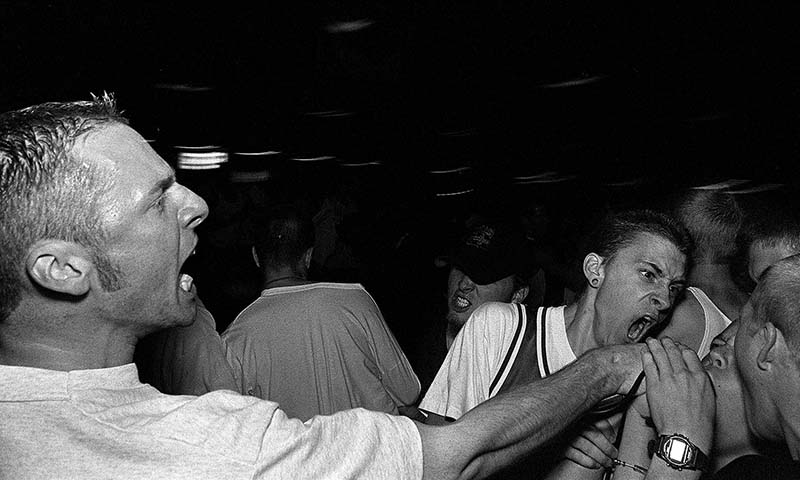 The date of the SLUG 18th Anniversary show is almost 11 years to the day from when CLEAR played their first show in February 1996. This first show, like many during their four years together, showcased their trademark metalcore sound. This sound was a mixture of American hardcore music and Swedish metal, with a local Salt Lake slant. It was an attempt to take what hardcore was producing and make it smarter and more sincere, something that CLEAR recognized in other local bands, like Iceburn. In their prime, CLEAR played to sold-out crowds in Salt Lake and toured across most of the US and Canada. On tour, they constantly had to defend their hometown, and had to work extra hard to show that a Utah band really could produce solid, hard music. One must remember that these were the days before mainstream metal/hardcore. CLEAR was one of the bands that put SLC hardcore on the map. They kept hardcore going in the city, and helped local bands realize that there could be national interest in what they were doing. The entire original lineup, consisting of Sean McClaugherty, Jason Knott, Josh Asher, Mick Morris and Tyler Smith, will play at this reunion show. This is the last show that CLEAR ever plans on playing.

As the individual members of CLEAR progressed musically, hardcore became less of a main concern. They played their last show seven years ago, in the basement of DV8. Since then, members of the band have gone on to play in several groups, including (but not limited to): Form of Rocket, Eagle Twin, Minerva, The Kill, Eighteen Visions, The New Transit Direction, Accidente, Furious Five and Hammergun. These bands, and other projects that members of CLEAR went on to spearhead, show just how far-reaching their musical influence in Salt Lake has become.

CLEAR is grateful that SLUG considered them for this show. The magazine has been an inspiration to many of the band’s members, even in the days before they played in bands. Both Sean and Jason view SLUG as an encouraging force in the local music scene, something that local bands can look to for support and motivation. Mick went a step further, crediting SLUG as being a major force in keeping the local scene alive over the last two decades. The band is happy to play this show for SLUG and to let us experience their energy and drive one more time. As they each move on musically, this reunion show is an opportunity for one last hurrah, one more chance to play for the scene that they helped to build.