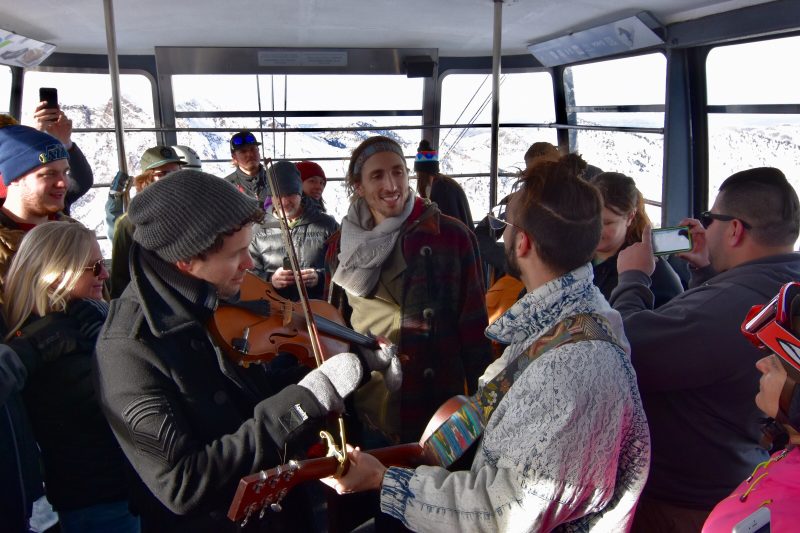 From the mountainside to the voting booth, CLIF Bar & Company has set out to save the world. CLIF GreenNotes (CGN), a program of CLIF Bar & Company, recently launched a mini concert series inside the Snowbird aerial tram called Frontside Sessions—a music-drive campaign to tackle one of the most pressing issues of our time: climate change.

CLIF Bar & Company established CGN in 2006 as extension of their values as an organic food company to “sustain [their] business, brands, people, community and the planet,” says Eric Walle, CGN Program Manager. CGN was “born out of the idea that musicians have a unique ability to influence positive change on a widespread level.”

CGN gives musicians the tools to “create actionable change for the environment, health and wellness sectors, homeless and hungry, and sustainable agriculture and food systems,” says Walle. Since inception, their network has grown to include over 100 artists and bands and about 150 nonprofit organizations. “Many artists have joined our network through CGN outreach at music festivals and events,” says Walle, “while others have come to us for help in making their tours more sustainable.” While most projects begin with artists, CGN has begun to reach out directly to nonprofits to “see if there are events or campaigns already in the works,” which might benefit from uniting with musicians to achieve their goals, says Walle.

CGN has partnered with Snowbird Ski Resort, Protect Our Winters (POW), Rock the Vote, KRCL and Breathe Utah to bring Frontside Sessions to Utah. Frontside Sessions is a campaign to encourage music fans nationwide—especially millennials—to take action to protect the environment by voting for elected officials who want to take steps to mediate climate change, whether in Utah or other states.

Utah is a destination location for outdoor recreation, and it’s simultaneously a hotspot for environmental debate. “This isn’t why we chose Utah,” says Walle, “but it certainly puts a bit of an exclamation point on our effort.” Utah is a beautiful, dynamic place to be outdoors, but “climate change poses a direct threat to that,” says Walle. “We believe voting is one of the most powerful ways to address the issue.”

The campaign aims to educate and inspire non-registered voters, and even people wanting to know more about climate change. “We hope by engaging with POW, participants will have the opportunity to learn more about climate change and become climate activists. POW shares a wealth of information on its website and in its newsletters,” says Walle. “Education starts with the show and will hopefully continue after that.”

Access to the shows is based on earning points, done simply by taking social action on FrontsideSessions.com. “This includes pledging to vote through Rock the Vote, signing up for the [POW] newsletter and sharing those actions via social media,” says Walle. This isn’t just for locals, though. Top point earners nationwide and locals who can’t attend the shows are still eligible to receive autographed memorabilia from one of the performers for their efforts.

Anyone who happens to be at Snowbird come showtime can take advantage of CGN’s reserved walk-on spots. “The catch, of course, is that these people must take on all of those same social actions in order to attend,” says Walle. However, taking action on the spot at Snowbird will be quick and easy. Just use one of the available tablets to take the necessary social action steps before, and then jump on board and enjoy the show. The tram concert is slated to be mostly entertainment while “the real action comes when it’s time to vote later this year,” says Walle.

Taking environmental action at the voting booth is a simple yet powerful way to combat climate change. “Climate change is a direct threat to the future of snow sports and outdoor recreation in Utah, but [also] to the future of our planet,” says Walle. “Yet at least 15 sitting governors currently deny that climate change exists, and by some accounts more than half of our Congress and Senate are climate change deniers despite mounting evidence to the contrary.” What better way to educate and engage citizens in climate activism than through music on the mountainside, surrounded by one of many landscapes we’re aiming to protect?

As a business whose success rides on annual snowfall, Snowbird “know[s] their success, and ultimately their survival, hinges on climate change as well,” says Walle. “They’re at the forefront of the ski industry when it comes to sustainability and long-term environmental thinking,” so they were quick to offer the aerial ski tram. To spread campaign awareness, Snowbird is filming and cutting videos of each concert for “Frontside Sessions’ partners [to] share online throughout the year to inspire millennials and others to vote,” says Walle.

Magic Giant kicked off the first mini concert of Frontside Sessions on Jan. 31. “On the way up the mountain, the tram was filled to capacity,” says Walle. “With an awesome mountain backdrop, Magic Giant played a selection of its most popular songs, acoustic-style. Band members took turns wading through the crowd while they performed, hugging and high-fiving thrilled fans.” Following the show, the band kept close to the tram base, talked with fans and posed for pictures.

The next Frontside Sessions show is this Saturday, Feb. 10, with Ron Pope, who feels right at home in an intimate venue. “I feel very at ease just telling stories and sharing things with a smaller audience,” he says. “It’s like we’re old friends hanging out in my living room catching up, but then I occasionally burst into song.” While the Snowbird tram venue selection is a great fit, so is the cause.

Worldwide travel exposed Pope to the many issues in the world that demand our attention. He recognizes his ability to impact fans and audiences, so, “if you can make even the smallest positive impact, why not try?” says Pope. “The environment is the most important issue we’ll ever address,” and it’s critical to support politicians who are responsive to public opinion and our demands for pro-environmental action. “This planet is our home; our future is here. I want to leave this world better than I found it and I refuse to support politicians who won’t work towards that goal,” says Pope. “When politicians don’t stand with us, we have to hit them where it hurts (at the ballot box).”

Facing global issues head-on, like climate change, while also facing an anti-environment administration simply means activism can, and must, continue to evolve and progress in many forms. CGN is bridging the gap between science and art to make it easy for citizens to learn, get involved and take action. Frontside Sessions is proudly fueled by good music, a good time and the assurance that your vote matters—join the fight now by visiting FrontsideSessions.com.