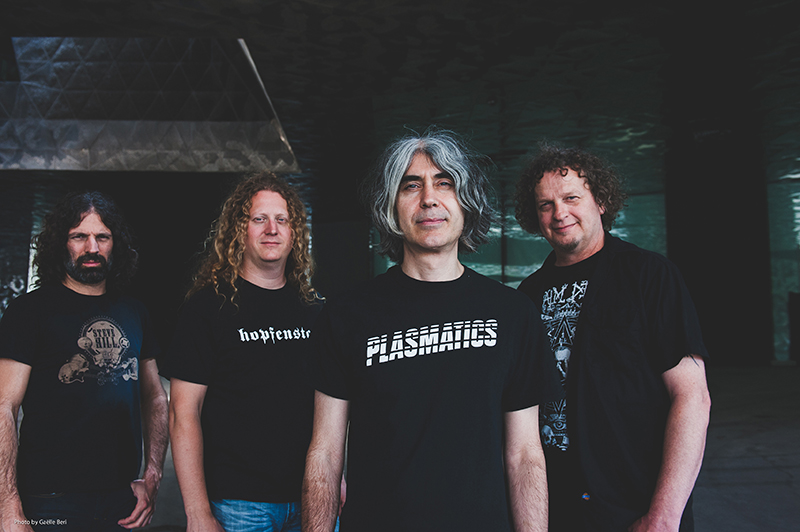 There are those bands that only a few seconds in—the instant you hear the opening riffs— you instantly know who they are, mostly because the only bands that sound like them are their imitators. Voidvod are one of those bands. With their new EP, Post Society in their pockets, Voivod are hitting the road and will play Liquid Joe’s on May 27 with support from King Parrot and Child Bite. From the Canadian band’s early thrashing days to their later, thrashy, but adaptive melodic and progressive sound, they produce what has come natural to them with Post Society. Voivod’s current guitarist Dan Chewy Mongrain, filled the rather large shoes of Voivod founding member Denis “Piggy” D’Amour, who passed away from a long fight with thyroid cancer. Chewy references on the legacy of Voivod as well as his place in the band and the new EP, which, if you haven’t yet had the chance to listen to, I suggest you do.

SLUG: You recently released Post Society. Sometimes an EP can be an afterthought for a band, often with songs the band didn’t use on a full-length, things like that. What was the process like for creating the new EP? For me, it feels very genuine, and I listen to it frequently.

Dan Chewy Mongrain: Well, the process was just to write new songs, really. We were all ready to give it a go with the new lineup. It all happened naturally—there is nothing like unused songs or leftovers in the Voivod camp. We write together from start to finish. I often come up with a few ideas, work with Rocky around them, and then we jam altogether with Snake and Away and give the ideas their identity, transforming matter like an audio collective sculpture.

The song becomes its own entity with demands and guidelines that we have to follow.It is a very creative journey! It’s fascinating to feel the transformation. Often, the final form is even after you record it. When you play the song live, there is still transformation going on. Composing is probably one of the most rewarding feelings. SLUG: The track “Forever Mountain” is my favorite from the EP. It has a great flow, but it’s intricate with so many different things throughout, from a calm pacing to a more aggressive style. What inspired the songs and its lyrics?

Chewy: The first riff came out when we were on tour with Napalm Death during the Through Space and Grind tour in the USA in 2015. I had this little recorder [Boss micor BR-80], that I bought during the tour to record ideas whenever and wherever I might be. It became “Forever Mountain.” Then later, Snake came with the idea of this feeling, of struggling through life, through tough times, as everyone has experienced it in different ways—mourning, finance, relationships, work, depression—but keeping the hope to get somewhere and not give up on ourselves: Keep on fighting, going forward, climbing this forever mountain with the hope to get to the top for this peaceful moment of serenity. Hope is one of the strongest motivations in life.

The music represents, in its progression, different feelings, steps, in this complex state of mind where doubts, weakness and despair fights with hope.

SLUG: The band has left a huge mark on the metal scene and music scene. What do you think is the biggest legacy of Voivod, to date?

Chewy: As a member of Voivod since 2008 but a fan since 1987, I always considered Voivod to be a unique band, creating the most unique kind of music—not only in metal, but in music of all genres. There are so many elements from many different styles of music, and the combination of them made them a one-of-a-kind band right from the start.

There is nothing like it really. For me, it is the greatest quality a band can have: a strong identity. You can recognize the sound of the band just by a few notes. It’s far from being generic. It’s a universe in itself.