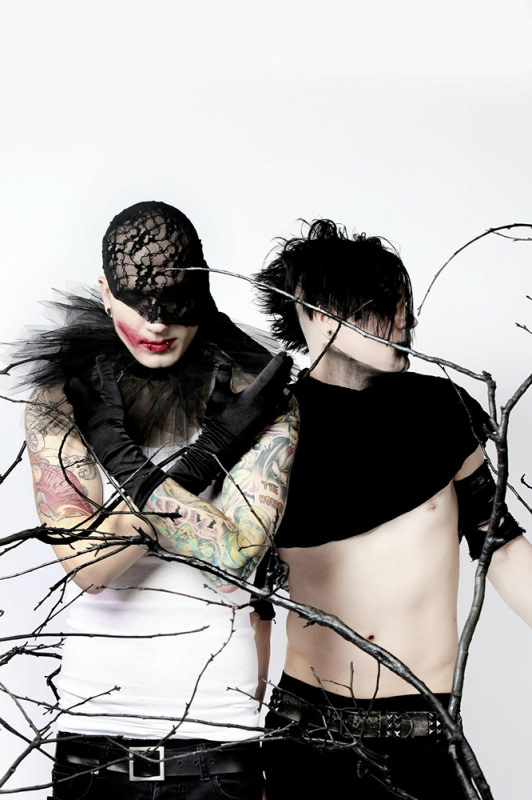 Aesthetic Perfection produce the sounds THEY want in their new album, ‘Til Death. Photo courtesy of Reybee

Closing the Distance: Interview with Daniel Graves of Aesthetic Perfection

There are only a few things about being on the road that are a drag. I feel that one of the biggest would be the long travel time between cities. I was delighted to be given the opportunity to have a conversation with Daniel Graves of Aesthetic Perfection while he covered some of those miles. We talked about some of the controversy of their newest release, his past side projects and life on the road.

Many of today’s Industrial and EBM acts have side projects, so when I get the opportunity to chat with an artist, I like to find out how many they have. Graves informs me that he “works on various, different ideas,” not side projects and that Necessary Response was created for him to be able to release his softer, more melodic creations. His label did not want to produce different sounds from one artist, so his hand was forced to create a side project.

Graves has evolved and taken control of the music he wants to create, not just sounds the label wanted him to. Now feeling supported and believed in by his label, he says, “Aesthetic Perfection is Necessary Response and Necessary Response is Aesthetic Perfection.” It seems as if a splicing of two entities that were never really meant to be separated has finally taken place.

I wanted to know about the how the creative, interesting visuals and stimulating plot lines were developed for the Aesthetic Perfection videos for tracks like “A Nice Place To Visit” and “The Dark Half,” so I asked if he came up with the ideas himself, or if he allowed the directors to put their feedback in as well.

Graves feels his greatest strength is in his music. He does come up with concepts and ideas, but he collaborates with others and relies on professionals with more expertise in the field of filmmaking to come up the finished product.

Graves had a permanent DJ residency at the popular club night Das Bunker in Los Angeles for a little while and still spins every couple of weeks when he can find the time. When it comes to spinning his own music in the clubs, he is very humble. The only time he will play his music is when he wants to experiment with it hearing it on a larger sound system or to visualize and gage a crowd response with something he is working on. “Once the track is released I never touch it, I never play it,” he says.

Establishing a connection with their fanbase is very important to them. On previous tours, they have come up with a game to play with their fans. The band hides a Golden Ticket in the city they are playing in and the first fan that finds it and submits their name and picture will gain free entry to that night’s performance. They have hidden tickets for two tours now and only three tickets haven’t been found so it does show their fans are participating in the game the band likes to play. They also love to socialize with the fans at their shows and after parties. When I asked what they like to do when it comes to a day off on the road the answer was sleep. Obviously they needed rest and recovery to prepare for their next performances.

Once again I had a great Industrial, EBM mind to pick about a collapsing scene and what could be done to help save more club nights from shutting down. I was not let down by his answer. Graves feels that some promoters and organizers need to take things more seriously. He feels that some think that just creating a Facebook event page is enough promotion and they leave out the very important ground work and effort that needs to take place for a larger turnout for events.

He also feels that diversity is the key to getting things back on track. “The alternative scene needs become all inclusive, instead of breaking things down into subgenres to open up and regain the sense of camaraderie that was more prevalent in the ‘90s than it is today,” he says. People need to be more open and willing to accept music that is unfamiliar, unexpected or new. In a sense, allow their music tastes to evolve. He also feels that the artists themselves need to become more involved in activities that allow their fans to interact with them.

I had to find out what the meaning behind the track “Fuck Industrial” was and I was told it was a “tongue in cheek” track that he was messing around with that had a sound similar to X-Rx and Combichrist—A humorous song about all of the things that frustrate him in the underground scene in general. “The narrow-mindedness and the elitism is not limited to the Industrial scene or to the Goth scene but something every scene has to deal with,” he says.

Their newest release has been quite controversial—I was curious to know why a softer path was taken. It seems there is a trend of Industrial artists taking the much harder agro-tech, metal style, making Aesthetic Perfection’s direction quite a ballsy move. This answer showed me that “sell-out” was not a term that I would use in describing the strength and tenacity of this band. It is obvious that it is very important for them to produce the sounds they want and not something that they think people want to hear. It appears that there was no conscious decision to make a soft or melodic record, it was just how the creativity flowed.

Graves recognized that the record was much softer and he was a bit apprehensive about people would receive it. He predicted the response was going to be slightly challenging, and he got what was expected. He is not too bothered by it. “Either you change and people hate you for it or you stay the same and they hate you for it—there is no pleasing everyone so all you can do is try to be honest with yourself,” he says. A lot of people love the record and a lot of people hate the record. Graves is happy that he has made others have a strong opinion and feel something about it— a mediocre record does not provoke emotion. When it comes to the evolving sounds of Aesthetic Perfection I feel Graves has made it known that no one can set the boundaries on their personal creativity and I am looking forward to their next release.

The Til’ Death Tour will be making a stop at Area 51 on June 4 with special guest Surgyn and Panic Lift. I wish you luck in finding the Golden Ticket.