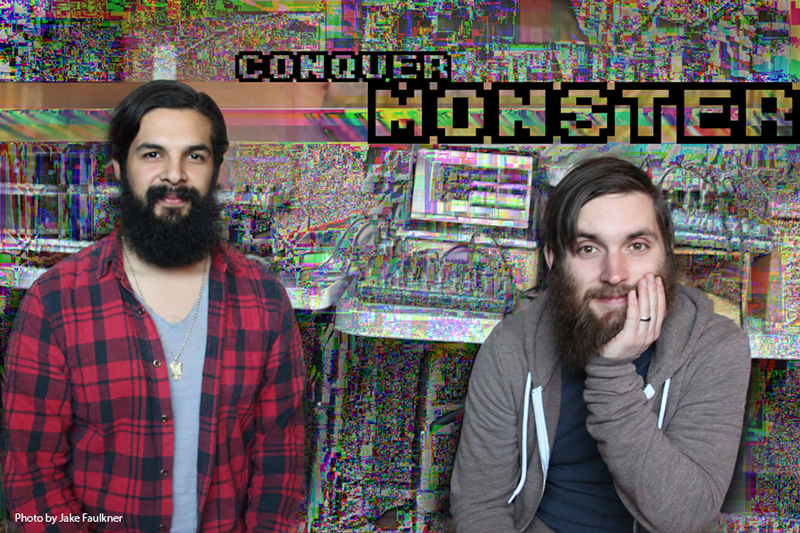 Blending Aesthetics For A Dystopian Future: An Interview With Conquer Monster

Over the last few years, Joshua Faulkner and Daniel Romero have been busy at work preparing a collaboration concept that has rarely, if ever, been done before—a combination album and comic book that spans a four-part series about a dystopian future. Together, the duo go by Conquer Monster, a lo-fi, chiptune electronic group that uses old video game controllers to create music in both live and recorded settings. We caught up with Faulkner and Romero just before the release party for their new project, the comic book Purge Worlds—in conjunction with their new album Metatransit—which takes place tonight, Oct. 16 at Diabolical Records.

SLUG: Where did the story for the comic book come from?

Romero: We kind of just started brainstorming stuff. We wanted to write a concept album, so we started talking about just jotting down ideas for a storyline so our music could reflect that. Eventually, that developed into writing the comic book.

Faulkner: As far as the story goes, we’re both really into ‘80s sci-fi stuff, so we just started brainstorming sci-fi ideas. We’ve always felt that the stuff we were jamming sort of had a sci-fi element to it, so we started creating this world about time travel through sound, and we just went from there.

SLUG: How long have you been working on this project?

Romero: We started everything in January 2013.

SLUG: This looks like it will be a series. What can fans expect in Part II?

Faulkner: It’ll be three or four parts. Joshua Omen and Chris Black are really in charge of it now. Joshua and myself have kind of outlined the series. They do all the art for it, and Joshua does most of the dialogue.

SLUG: Where did the idea for a comic book come from? Do you have a history of making or reading comics?

Romero: Joshua has a history of reading comics. I have a history of writing sci-fi and short stories. I think a lot of this stemmed from the music we write and the overall feelings and emotions that we feel like it provokes. A lot of it was influenced by the music at first.

SLUG: Which idea did you begin working on first, the comic or the album?

SLUG: What about the characters in the comic? How did you come up with them?

Romero: I would say that the 10-chapter rough outline came from when Josh and I started talking about the comic. We came up with the concept for the characters right away and developed it from there.

Faulkner: I don’t think they’re based on anybody real.

SLUG: Will you be incorporating the comic into a live setting? If so, how?

Romero: Yeah. We already have started to a little bit. The cool thing about the comic book is that we’re actually in it. We’ve started taking on that persona [in live shows], especially for the release show—we’re taking on that sci-fi theme.

SLUG: Tell us a little bit about your recording process.

Faulkner: Daniel will generally have the skeletons of the songs. We’ll jam on it for awhile and I’ll take it home and fill out the drums. It’s really collaborative.

Romero: Most of the time, we try to avoid conventional song structures, but dance/pop songs are really fun to play, too, so we do some of those.

SLUG: Do you connect anything to any sort of plug-in or software?

Romero: We use Logic for our drums, but that’s it. Other than that, everything is recorded live. I use synthesizers, but Josh uses Commodore 64s and a Ninetendo Gameboy to make his music.

SLUG: How did you create instruments out of gaming devices?

Faulkner: It’s all stuff that’s fairly well-documented online. Depending on what it is, I’ll do some hardware mods and then add a filter. I’ve also just bought some cartridges that I can just plug in. I use Synth Cart and Mesiah—those are two cartridges that, within the chiptune community, are really well-known.

Conquer Monster are playing with Teen Daze at Kilby Court on Oct. 23 and their album release party will be at Diabolical Records tonight, Oct. 16. Their album, Metatransit, is available for sale individually or as a package with the comic “Purge Worlds,” out now on Black Omen Comics. To find out more about Conquer Monster, check them out online at conquermonster.com or conquermonster.bandcamp.com.