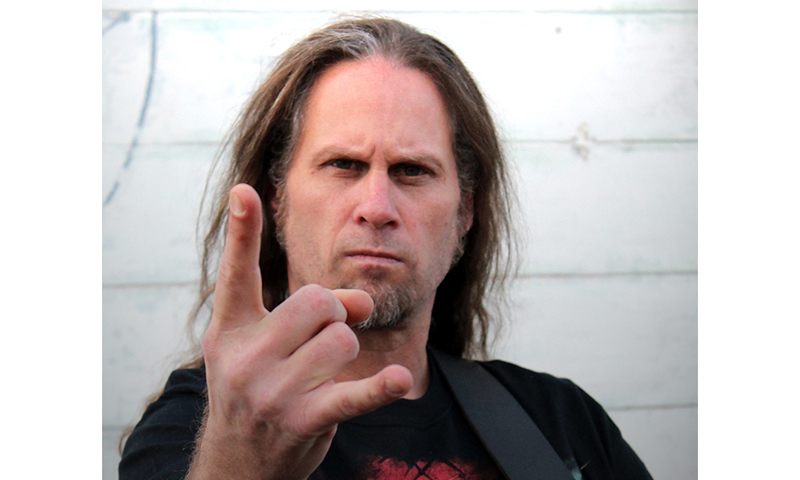 Morbid Angel are no stranger to enigmatic frontmen. In 1997, when vocalist/bassist Steve Tucker replaced David Vincent, Morbid Angel went into an arguably experimental phase, sounding quite different from the more death/thrash–influenced first four albums from the band. They released the highly praised Formulas Fatal to the Flesh album, which offered a more straight-up, aggressive death metal style with slower rhythms and some more experimental guitar work from guitarist Trey Azagthoth, and also instrumental, synth-oriented songs like “Ascent Through The Spheres.” Tucker brought in a new era to Morbid Angel, continuing with Gateways to Annihilation and, a year after the 2003 album Heretic, they saw Tucker leave the band. Tucker remained absent from the realm of music until 2011, with the Nader Sadek project and then his own band, Warfather, who released their second album last year. Tucker talks history and future for Tucker’s era in Morbid Angel, having returned to the band 2015. Morbid Angel headline a slew of summer dates with support from Suffocation, Revocation and Withered, which makes a stop in Salt Lake City on June 10 at The Complex.

SLUG: What brought you back as the Morbid Angel vocalist? You have had success and been active with Warfather … Is that a project you’re still actively working on, playing in both bands?
Morbid Angel: What brought me back is pretty simple: the Morbid Angel fans and the opportunity to create music with Trey. That is what brought me to Morbid Angel from the very beginning. Trey is like a mad scientist: You never know what ideas he will bring to the table, but I guarantee they will always be something new, possibly even genre-changing.  For now, Warfather will take a rest. I prefer to focus on one thing at a time, and MA are what I am focusing on now, however, I have learned to not say the word never …

SLUG: It had to be a huge step for you—not really in much other musical projects and to join Morbid Angel—big shoes to fill. What was it like when you first joined up with a band that already crushed so many boundaries?
Morbid Angel: That is actually a bit funny—a huge step maybe because of the touring, which I had not previously done—however, I truly feel that it was inevitable that I would be doing this [sort of thing] anyway. Prior to joining MA, I was in a band called Ceremony in my hometown with Pat O’Brien, now in Cannibal Corpse. We were drawing plenty of attention from labels and the underground. The recording we did together helped too secure us both our current positions. As to me having to fill big shoes, I was never even slightly intimidated. I have always done my own thing—it is me, the real deal. No disrespect intended but some people are real and some put on an act …

SLUG: This is a pretty big tour in the states, with Suffocation … My burning question is: Will all eras of Morbid Angel be played? Or will there be a focus on the era that you were in?
Morbid Angel: Formulas Fatal to the Flesh was released nearly 20 years ago, followed by Gateways and Heretic, meaning that this band, with [me], has its own history. We feel it is time to focus on the fantastic music that we created together. I have done many tours playing music from all eras of MA, and I am sure that we will always do “classic,” all-era MA songs, but we also feel that we created many “classic” MA songs together and will focus more on those at this time.

SLUG: Nothing really against David Vincent, but I only saw Morbid Angel with him in the band once. The other times, I saw the band with Jared Anderson (Extreme Steel Tour and Motörhead Tour). Those times stood out more to me than recent. Question being, what do you think that you bring to the live presence that differs from the Vincent version?
Morbid Angel: Some may disagree with me on this, and that is fine, but I feel that MA are a much meaner band with [me] and Jared, when he filled in … Jared and [I] were similar people. He was a very real person.

SLUG: The Nader Sadek project was kind of your return to music. Why the absence from doing anything for so long?
Morbid Angel: There is no clear answer to this question. Time goes by very fast at times, and this was a time in my life that went by very quickly. I was busy with other, very important personal things. It didn’t seem like a very long time to me.

SLUG: Also, I remember first when Nader Sadek started out. He actually reached out to me to chat and get some promotion. The guy is intense and was so stoked to have you involved. How was working with him and that project? Is it something you would consider, if the offer came up?
Morbid Angel: It was a good time at the time, and we definitely became friends during the project, however, as I said earlier, it is one thing at a time for me, and MA have me pretty busy. The cool thing about the NS Project was the influx of people from different areas on the collaboration. I felt all along that it should be a constantly changing, evolving group of people to keep it always new. Otherwise, it is not a project; it is a band. I am glad I was involved when I was and that it has become what it is currently.

SLUG: I’ve seen it’s pretty much confirmed that Morbid Angel are working on a new record (http://www.blabbermouth.net/news/steve-tucker-on-songwriting-progress-for-next-morbid-angel-album-its-much-further-than-the-initial-stage/). How is that process going? How involved are you with the writing, and what do you feel is the strongest part of the current incarnation of Morbid Angel?
Morbid Angel: We will soon mix the new album, and I am very excited for what we have created. Obviously, I think that Trey and [I] working together is proven and the strongest element. However, the new drummer, Scott Fuller, brings his own touch to the album. I have always been more about the team than the individual, and this team is strong.

SLUG: Any chance fans will hear any new material live on this upcoming tour?
Morbid Angel: Yes, we may play one or more during this tour

SLUG: I wanted to ask: There have to be some pretty special moments with your time in Morbid Angel. Is there any moment that stands out to you from past to present as something special?
Morbid Angel: Yes, of course. It was very special to me when FFF was released as well as Gateways. Playing Wacken and the Roskilde festivals was amazing, along with many other shows.

SLUG: It’s unavoidable not to deal with expectations being in Morbid Angel. Lots of fans didn’t take to III, and you’re back in the band working on touring and following that up with a new album. Do you take any of the type of fan expectations to heart, or are you focused on doing what you do and making the best of it?
Morbid Angel: I find solace in knowing that what I bring to MA has not changed. The fans know what to expect with me, and I feel no pressure to do anything other than what I have always done.

In addition to the plan to solely play songs only from his time in Morbid Angel on this tour, a new song, a bootleg of the song “Warped,” has surfaced online. This is a huge difference from the last tour Morbid Angel show in Salt Lake, which featured Vincent on vocals performing the band’s third album, Covenant, in its entirety. See Tucker at the helm of a band with some renewed ferocity and goals in sight on June 10 at The Complex in Salt Lake City with support from Suffocation, Revocation and Withered.

Editor’s Note: The original version of this article incorrectly listed that Covenant is Morbid Angel’s second album, when it is the third. The changes have been amended.