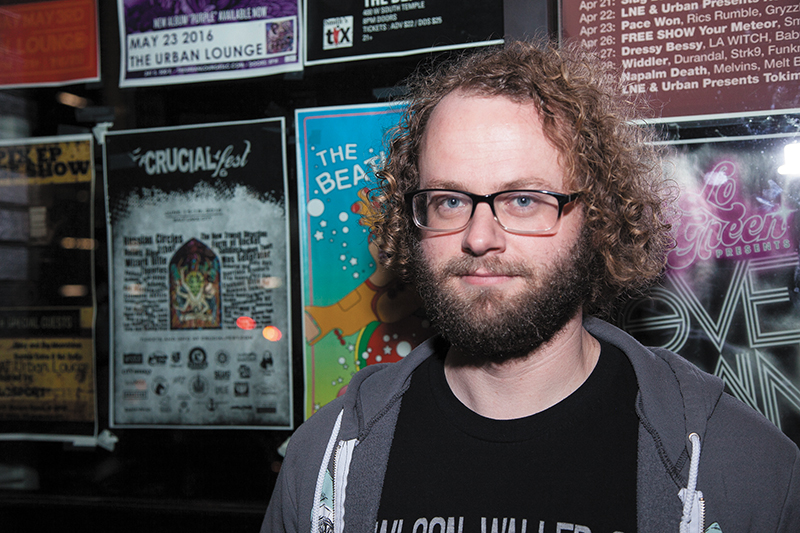 “I was in school at the U and Loom had a breakup, and I was like, ‘Well, shit, I’m out of the game of touring for the foreseeable future—so what can I do that matters?’” says Jarom Bischoff, founder of Crucialfest, held June 15 through the 18 this year. “I needed something to do and thought, ‘There’s no reason why there shouldn’t be a really awesome festival here.’”

Six years into its journey, Crucialfest has grown from a burgeoning side project into a regionally acclaimed heavy music festival and a beloved summer staple for Salt Lake musicphiles. For me, when the sun comes out and everyone else starts to break out the BBQ and patio furniture, I’m think-ing about getting my CF wristband and taking three days off from work. It’s been a must-go event for me since their first show at Liberty Park. “It’s grown very slowly,” says Jarom. “It’s not the same type of music festival like Treefort or Psycho or these festivals that just pop up and are instantly huge and have a lot of money behind them. It’s a small, intimate music festival that features a lot of small local bands, and it always will. … This is a special Salt Lake music festival.” That’s the way I like it.

Crucialfest started out as a group project among friends, but is now a passion project for Jarom and Tiffany Bischoff. While there is a large circle of friends and family who support the festival as volunteers, the heavy lifting of getting it organized falls on the couple. With regard to Tiffany, who also organized the Snowbrush Herb Festival in the fall, Jarom speaks to the importance of his partner in making Crucialfest possible. “She helps with social media, organizing the merch—she helps me network, find vendors and get the word out. She’s there.” says Jarom. “It’s a two-person operation, and we’ll probably stay like that for a few more years.” With their hard work, a kickass festival is always assured, but CF has seen an ebb and flow in formatting changes over the years.

Last year, the event was held at a single, 18-plus location. This year, the festival will return to its regular format of holding a number of all-ages shows, as well as 21-plus shows, with venues all within walking distance. Like they have done in the past, Metro and Art Garden will host the bulk of the shows, and Urban Lounge and Duffy’s will house the late-night shows and CrucialRest. While some prefer the single-site festival, I like the small, stroll-down-the-street approach, à la SXSW. Some of the best parts of Crucialfest are wandering between sets, talking to a complete stranger about how that last set just blew your mind, chowing down on some Crucial Dogs and Burgers at The Art Garden or guzzling a cold beer after standing in the crowded heat for half an hour.

Apart from the national headliners and the local badasses, what I love most about Crucialfest are the reunion shows. “Ether are the No. 1 band I’m most excited to see. I have never seen them before,” says Jarom. Ether are an avante-garde experimental group from SLC’s past. There is a smooth, almost drone quality to what I’ve heard, but I honestly have no idea what to expect from their live performance. To note, I am amused to see that they named an album after an inane man who is currently running for president.

Apart from Ether, local legends like Form of Rocket and The New Transit Direction plan on playing a set each for the festival. I’m particularly excited to see Form of Rocket and to purchase a copy of Se Puede Despedir a Todos on vinyl. “I’ve been hounding all three of those bands to reunite for Crucialfest,” says Jarom “It’s a matter of logistics and when it happens to line up. This year, it lined up.”

In the end, what most fans love about Crucialfest is that it’s the show that gives back to the music community by fostering regional and national relationships and showing how vibrant and alive the SLC music scene is. Because of Crucialfest, bands like Red Fang and Call of The Void regularly stop in Salt Lake every chance they get instead of skipping on to Phoenix or San Francisco, like they might have 10 years ago. “Our mission statement for local bands is to improve the network for locals bands that want to tour,” says Jarom, “for them to network so that the next time a local band wants to tour the West Coast, they know 10 bands that they met from Crucialfest and can now hit up and play shows with … It’s about heating up the touring environment for locals.”

If you’ve never gone because you’re afraid of your inner-metalhead or that you’ll break your glasses in a Wulf Blitzer pit, Jarom has some sage advice: “Don’t be intimidated by those who might look intimidating,” he says. “I promise they’re all just humble, friendly people. Don’t feel like you need to be this metal person or a punk person to come to Crucialfest. It’s not a festival for exclusive people. … Give the live show a chance.”

Come give me a high five, but more importantly, catch bands like Russian Circles, Baby Gurl and Helms Alee, June 15–18, with a few warmup shows the week before. Find more information at crucialfest.com.