00:00 / 18:49
Spotify Stitcher
RSS Feed
Share
Link
Embed
Crystal Castles came out of nowhere. The music alternates between despondent and fierce, often finding a middle ground between the two. Lead singer Alice Glass growls and shrieks over Ethan Kath’s instrumentals (which are generally somewhere between 8-bit Nintendo music and a car commercial), and the result is incredible. The live show is tempestuous and infinitely stimulating—imagine Iggy Pop as the hypeman at a Justice show. They strive for abrasive and bleak, but neither is overdone. 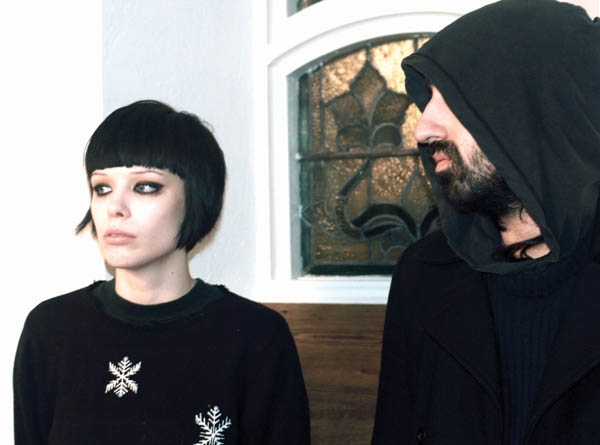 Crystal Castles came out of nowhere. A few unfinished demos circulated the Internet and garnered enough buzz to earn multiple offers from various record companies in 2005, before the duo had officially joined together. The music alternates between despondent and fierce, often finding a middle ground between the two. Lead singer Alice Glass growls and shrieks over Ethan Kath’s instrumentals (which are generally somewhere between 8-bit Nintendo music and a car commercial), and the result is incredible. The live show is tempestuous and infinitely stimulating—imagine Iggy Pop as the hypeman at a Justice show. They strive for abrasive and bleak, but neither is overdone.

Their unique take on electro-punk is the product of their experiences in the punk scene in Toronto, Ontario. “We met reading to the blind,” says Kath in reference to him and Glass’ shared community service. However, the two were really drawn together after Kath witnessed a performance of Glass’ band Fetus Fatale. “I felt like I had, by accident, discovered a great poet. Also, I was impressed with her bravery: When sexist old men would heckle her, she would spit beer in their faces and not care for consequences,” says Kath. He had been recording his tracks for about a year before Glass became involved. “I did not intend to have lyrics over my instrumentals, but I then knew my songs would not be complete until they had her poetry involved,” he says. Things didn’t initially work out, however, and they didn’t make their now-infamous demos until eight months later. “One friend warned her, ‘Stay away from him, he’s a snake, he’s the guy from that GG Allin cover band.’ I didn’t give up,” says Kath. After replacing a Crass CD playing at a party with his own tracks, he had her convinced. “Yeah, if this is your stuff, I’ll sing over it,” Glass told him. She picked a select few of his already prepared tracks, and they put together a collection of 7”s and singles that would eventually comprise the first self-titled Crystal Castles album, released in 2008 on Lies Records.

Crystal Castles has become a perfect representation of the changing music industry, as they owe their fame greatly to the Internet, social media and file sharing. “Alice Practice,” which became their first single and a catalyst for their upcoming notoriety, critical acclaim and fame, was initially a vocal sound check recorded unbeknownst to both Glass and Kath. After being slightly tweaked, it was uploaded to a Myspace account (yeah, it was a few years ago) where it started to build hype. The last two albums were all over the Internet before their respective release dates (arguably creating a great deal of publicity), which might be why so little about their upcoming album has been discussed.

“We were confused because we didn’t understand how so many unfinished songs had leaked, though we didn’t care that everything had,” says Kath of Crystal Castles I and II.
It has been four years since the release of their first full-length, and while the music has yet to make a drastic change, the audience has grown exponentially. Playing huge shows and gaining a reputation for an out-of-hand stage presence, both albums, so far, have topped album of the year lists across the board. Though they’ve come a long way since Myspace, Kath uses the same lo-fi production techniques to generate their unmistakable sound. “We don’t pay attention to numbers and popularity. We like to dig deep into the past for equipment. I’ve recorded some stems on a 1948 British Tape Recorder which hadn’t been plugged in for 15 years,”
he says.

My attempts to discuss the upcoming album with Kath were unsuccessful, though he produced the entire album. Judging by the single “Plague,” it doesn’t seem like there will be much of a departure. In a High Res PR press release, Glass revealed that oppression will be a recurring theme. “It feels like the world is a dystopia where victims don’t get justice and corruption prevails,” she says. Though the feeling of disparity won’t feel too out of place amongst Crystal Castles’ other work, the album promises something new, sonically.  “We wanted the new album to sound like a completely different and new experience. Any keyboards and pedals used on I or II were traded for different keyboards and pedals so that there would be a new palette of sounds to work with,” says Kath in the same press release. The new album, (III), will be released worldwide digitally on Nov. 5 and physically Nov. 6.

They seem to be excited for Salt Lake City due to their knowledge of our local music history. “We know all about the Indian Center shows, Raunch Records. Actually, hasn’t Raunch reopened? I hope that’s true,” says Kath.  Maybe we’ll catch the duo sifting through records at the local shop when they pass through town on Oct. 18.

Come watch Alice Glass climb all over the monitors and rafters of In The Venue whilst screaming and dancing at a fever pace. At the very least, I can promise it will be cathartic.