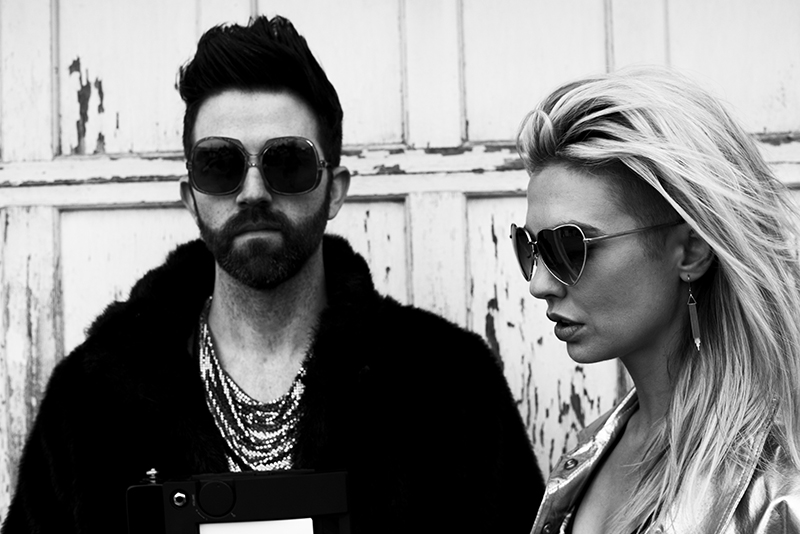 Dance Out in the Sun: Interview with Hive Riot

Despite only forming in 2015, Hive Riot have already caused a buzz with their debut self-titled album, which officially came out on Jan. 22 of this year. Comprising brother/sister-in-law duo Mindy (vocals) and Dustin Gledhill (synths), Hive Riot brings both artists’ best attributes to light. “I felt like we both had strengths we could bring to the table” says Mindy. The album ranges from the instant pop bangers like “Sherlock” and “Kiss my Lips You Fool” to more introspective yet sanguine tracks such as “Her Elegy,” a tribute to Dustin’s grandmother featuring a cassette recording of her telling a ghost story in 1984. Citing acts such as Brothertiger and Christine and the Queens as inspiration, Hive Riot have a confident, cheerful take on the electronic genre, recalling sounds of CHVRCHES and Purity Ring, but with an ’80s danceable twist.

Though Mindy and Dustin had interests in electronic music before Hive Riot, both artists are currently established in other musical endeavors: Mindy is known for her solo, indie singer-songwriter career in Provo while Dustin performs and teaches classical piano in New York City, requiring a lot of travel both ways. It was Mindy who reached out to Dustin to start Hive Riot. “We’ve both been doing our own genres for a long time and [we] both thought it would be fun to do something that was a departure from our usual jobs,” says Mindy, who has dabbled in the EDM genre before, having collaborated with Kaskade in the past. Dustin, however, had never played anything in the electronic pop genre. “It took a little convincing though to get him on board because he hasn’t done any[thing] electronic before, but hes such an incredible keyboard player I just thought he would be brilliant on the synths” says Mindy. “I knew he had an incredibly fun and crazy side to him that he wasn’t able to share in classical music and I knew people would love it.”

Though synths were almost second nature to Dustin, the freedom and spontaneity of electronic music—as opposed to the structure of classical music—created a challenge he had to overcome. Because both Mindy and Dustin have their own careers outside of Hive Riot, there had to be a lot of instantaneous writing while working on their album. “Recording this album was a real exercise in letting go for me…It’s hard to go in there not having practiced for 10 hours to record the damn piece” says Dustin, who had to travel from New York during the writing process and often had to come up with new ideas on-the-spot. “It took me a little while to be comfortable, and I’m still working on that” he says, “It’s a different change of pace and something that has excited love and newfound desires for classical music.” The intricately woven in keyboard melodies in “Sherlock,” as well as the more somber piano in “Her Elegy,” are Dustin’s classical touches on electronic, which elevates Hive Riot’s album into a pop album with influences in many genres and makes an impactful statement.

The result is infectious, synthpop dance music that has a deeper meaning upon the second listen. “Undercover” touches upon issues of people not being able to live their truths, whether they are pressured by society to hide aspects of their personality or are struggling to accept themselves. “Step out from behind the shadows/ Shake your shame and all your sorrow/ Take your place and dance out in the sun,” sings Mindy to an upbeat dance track, one that has special meaning for both members of Hive Riot. “The feedback we’ve been getting from our fans is that they listen to a track and then it resonates with them in something in their life that they’re trying to uncover or be ok with…In my case its about being raised in Provo and letting go of my sexuality,” says Dustin, who prefaced “Undercover” with a track called “Pourquoi?”, where he explains his journey from being a devout Mormon and going on a mission to Quebec to where he is now—open about his sexuality and married to his husband—completely in French. The spoken aspect of “Pourquoi?” gives the sense that the song is actually a conversation to the listener, unapologetically telling the truth before leading into “Undercover.”

Even with the release of their first album, Hive Riot sought to do something for the community as well as promote their music. Funding the project through pledgemusic.com, where they were able to meet their goal, they also gave a portion of the proceeds to the True Colors Fund, a foundation started by Cyndi Lauper to help homeless LGBTQ youth get help, “It’s definitely about liberation—the message of our album is letting go and embrace your fears” says Dustin, who does not want to pigeonhole the message into something that is strictly for members of the LGBTQ community, but for anyone who can relate.