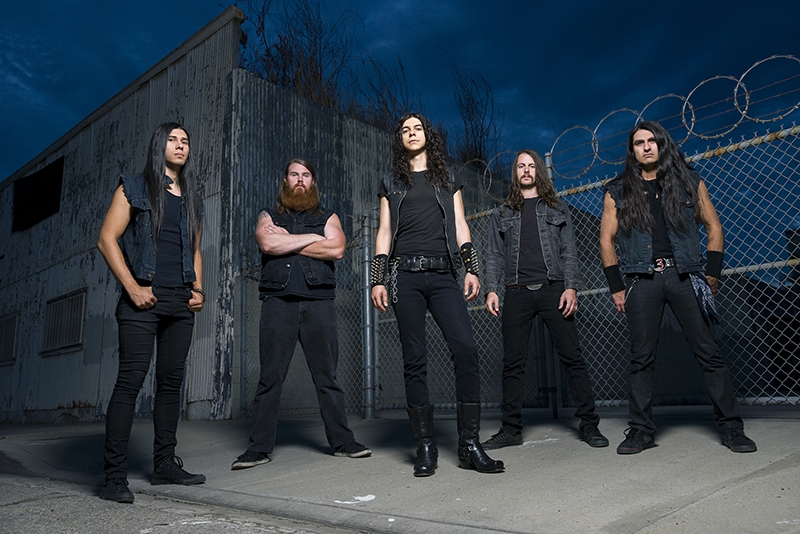 Touring almost nonstop since the release of Ride the Void in January, Holy Grail are working hard to keep their name on the minds of metalheads nationwide. Even though the band is comparatively new to the national stage, they’re determined to keep people excited and to build on their success. “It’s great to see that hard work actually pays off,” says guitarist Eli Santana. “It’s hard to gauge how far we’ve come since we’ve started touring, but we’re getting real, actual fans, which is awesome.” Touring is a valuable creative asset for Santana as well, who says that he has learned many lessons about refining his sound on the road. “When we started touring with bands like 3 Inches of Blood and Saviours, I realized that their raw tone is what makes them sound so good live,” he says. “That made me re-evaluate myself as a guitar player, and I started wanting to play cleaner, to take everything slower and play to slower tempos.”

When they started touring with Orange Goblin and Lazer/Wulf in late September for their current tour, Holy Grail played a show at One Eyed Jack’s in New Orleans, which gave the band their first chance to play in one of the great musical capitals of the United States. “We had never played in the French Quarter before, and it was a weekend, so it got really exciting. That was the first show we played with all the other bands,” Santana says. Later in the tour, the band got a chance to tour through their home territory in California, playing a string of shows along the coast.
However, as they reach the latter half of their tour, the band has started planning their schedule for when they get back home. “We’d like to focus on getting a couple of videos out, but we’d also like to get a head start on writing for the next record,” says Santana. “We’ve got some ideas we’ve been throwing around. We get a lot more joke ideas than anything. We’re joking about making a concept album, but nothing is set in stone.” Even over the long tours of 2013, Santana says the band has been keeping up with songwriting, and, while they haven’t finished any new songs, they plan to approach the next album with a good stock of already-established ideas. “Me and [vocalist] James-Paul Luna are always recording melody ideas and writing down song titles. We’ve been trying to be good about having a well to pull from for song ideas,” says Santana. “Being an arrogant shredder, you kind of want to show off all your goods, but I’m definitely trying to focus on being a songwriter first and foremost. That’s definitely been a learning process.” Santana says one of his favorite parts of playing for Holy Grail is getting a chance to work with Luna and the interaction between their vocal and guitar melodies. With the addition of a new guitarist, Alex Lee, in 2011, the dynamic of the band changed in an exciting and unexpected way. “He has a different style and approach than I do, so it creates a really nice contrast in our guitar playing,” says Santana. “It was fun writing chord progressions with open parts, knowing that it was going to be his solo, and to see what he would come up with.”
Many fans have commented on the shift of theme between their debut full-length Crisis in Utopia and Ride the Void, noting that the newer album seemed much darker and less fantasy themed. “A lot of our favorite bands write the sort of fantasy, sword-wielding lyrics. We might go back to that,” says Santana. “We weren’t going to write about a wizard or something when the song was emotionally heavy.” Holy Grail was in a different creative space when writing Ride the Void, and the shift of theme felt more appropriate to the new material the band started writing. “It was easier to sink in and write something that was close to us. As scary as it is to put yourself out there like that, it was definitely more rewarding to get some of that stuff out,” says Santana. “Maybe next record, we’ll pick up the swords again––who knows?”
Holy Grail plan to finish up their tour with a string of smaller shows around the Los Angeles area. While there are many ideas the band has considered as a next step, it’s clear they plan to continue the momentum they’ve built up over the last year. Their goals for the future remain broad for the time being. “I wouldn’t want us to be the richest guys on the block––though I certainly wouldn’t turn that down––but I would like to not have to worry about money when we get home,” says Santana. “Even if that doesn’t come up, we want to be the best metal band we can be. We want to carve our own niche in the metal world.” Santana hopes that Holy Grail will develop its own unique style, and looks forward to the day when fans recognize them for a distinct “Holy Grail Sound.” Check them out live on the last stop of their tour at Urban Lounge on Nov. 15 with Merlin’s Beard and Mister Richter. Find them online at holygrailofficial.com.
Photos: