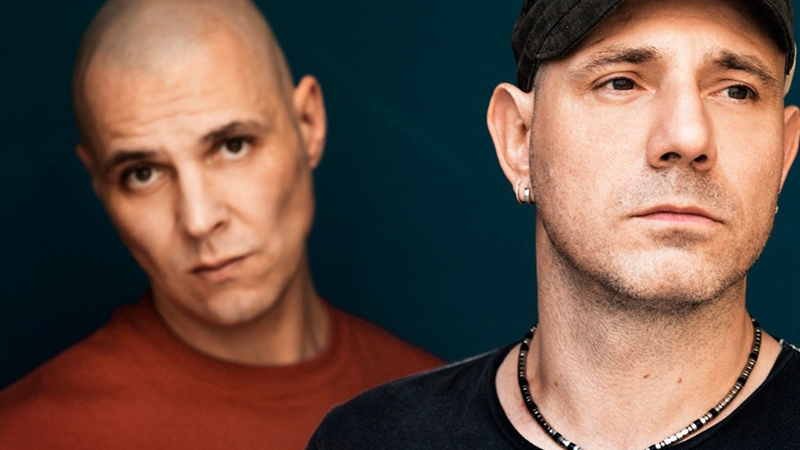 In the history of music written by radio DJs, synthpop met its demise soon after Kurt Cobain shoved his Fender down the throats of the masses. Certainly the most popular of acts like Depeche Mode still filled their arenas as Erasure and the Pet Shop Boys packed theaters. Some acts like Camouflage and Alphaville simply returned to their country of origin abandoning dreams of conquering America. Everyone else was ceremoniously coffined into obscurity.
It was around this time that a German group called De/Vision released their debut album, World Without End. It had been preceded by a handful of self-released cassettes and singles via Synthetic Product Records, the future home of other undiscovered electronic acts like Mesh and Lavantgarde.
Working in the shadows, De/Vision quietly established themselves as one of the most prolific and respected electro pop acts.
Nearly 20 years after the group’s conception, De/Vision toured America for the first time in support of their 10th album, NOOB. This afforded me the opportunity to interview keyboardist Thomas Adam.
Seven years later, De/Vision are returning to Salt Lake City, a last-minute addition to a brief six-date North American tour. It proved the perfect opportunity to dip my toes back into music journalism and catch up with one of my favorite electronic acts. Fortunately, Adam was kind enough to oblige.
SLUG: Last time we spoke, you were touring America in support of the NOOB album. Since then, you’ve been fairly busy, having started your own record label, released two studio albums and run a successful crowd funding campaign to produce CD/DVD of the group’s 25th anniversary tour.
What led you to start Popgefahr Records?
De/Vision: We worked with major and indie labels for many years, so we know the advantages and disadvantages of both worlds. I want to emphasize that we are thankful for everything [the labels] have done for us. We know that we wouldn’t be where we are without their help and efforts.
Starting our own label was the consequence of the crisis that hit the music industry a few years ago, when illegal downloads came up and record sales went down. The labels had to react to this crisis somehow and they did by cutting down expenses. There was less money for promotion, for example, and I know that many bands were fired at that time.
After the release of NOOB in 2007, we talked to the label about the next record but the advance money they offered wasn’t even enough to record an album, so we decided that the time had come to start our own label.

SLUG: What difficulties have you faced by putting out albums on your own?

De/Vision: When you work for a record company you don’t really have to care about anything but the music. Of course, you are also involved in other things—like artwork, for example—but the label basically takes care of everything.
Putting out albums on your own is something completely different. You have to take matters into your own hands, and that means a lot of work. The most difficult thing has to do with money. Releasing an album is always a financial risk—it requires a lot of money in advance and you don’t know if that money will come back to you. Running a label demands much more responsibility and time than being a musician only.
SLUG: I know that your label has expanded to include additional artists. How hard is it to bring attention to new artists like Garrett Miles. Is radio still a viable option?
De/Vision: It is extremely hard, especially for a small and rather unknown label like ours. I’m pretty sure “Save Me” by Garrett Miles would have been a hit on the radio if it was released by some major label. Some radio stations supported the song; they played it a couple of times but not often enough. It’s useless if you don’t get a heavy rotation. Most radio stations, especially the big and important ones, ignored it completely. They had all kinds of excuses why they wouldn’t play it.
Radio is still very important, but the truth is that only a small number of artists have access to this world—most bands will never appear on the radio.
On the other hand, there are many small internet radio stations who support artists like Garrett. Maybe they do not have millions of listeners but hey, you can’t have everything.”
SLUG: As a fan of the music, it can be equally as frustrating. Like you said, there are a few Internet radio stations that play synthpop, but they tend to focus on music released before 1994. Recently a friend was able to convince KCQN, a local Internet station, to play a couple few newer artist like De/Vision, Mesh and Iris, but it’s been a real challenge.
You used crowd funding for your 25th Anniversary CD/DVD release. Was it a positive experience?
De/Vision: We used PledgeMusic and I’m sure we will use it again in the future. It is a fantastic tool [that helps a band] realize a project together with people who really believe in what you do. For small companies like our indie label, it offers a very safe way to finance a product.
SLUG: Not many bands, even successful ones, stay active for 25 years. Is there a secret to your success and longevity?
De/Vision: The basis of our musical partnership is our friendship that lasts for more than 30 years now.
We have always treated each other with dignity and respect. Loyalty and honesty are the cornerstones of our friendship. That doesn’t necessarily mean that the sun is shining all the time. We often argue and disagree—we are different characters with different ideas, after all—but we’re also reasonable guys and we have always been able to reach a compromise no matter how opposite our opinions were.
Apart from our friendship, we still talk the same language when it comes to music, which is essential for a musical partnership.
Last, but not least, we should not forget our fans. We still have an audience—that’s what keeps us going.
SLUG: Your last album was 2012’s Rockets and Swords, are there any plans for new material?
De/Vision: Yes, we are already working on a new album, which will be released in 2016. The project is still at an early stage of development, so I can’t give you much further information. We don’t know yet where our journey will take us this time.
De/Vision play Club X on Tuesday, April 28 with openers Voicecoil.
You can hear De/Vision and other modern synthpop groups at kcqnutah.com on Tuesdays and Thursdays at 3 p.m. and select “Crazy Aunt Carri”Weekends.
Keep up to date with De/Vision at devision-music.de
Follow Ryan Michael Painter on Twitter: @ryanMpainter
Photos: