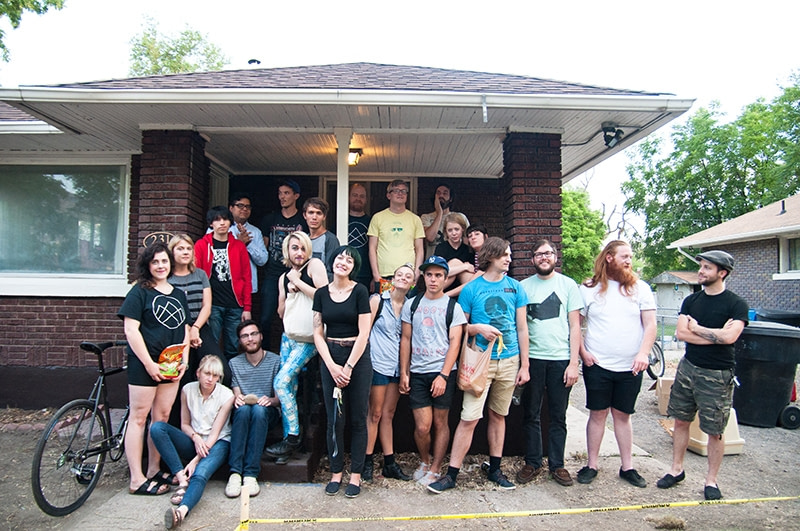 A few years back, I was taking in the Neon Trees set at the Big Ass Show and something beautiful and unexpected happened. About midway through, lead singer Tyler Glenn started to talk, at great lengths, about the Provo music community—saying it was like a family. Now, this was obviously an unplanned break in the show, and it went on longer than anyone expected, but I was taken aback by the whole scene. Here was, arguably, the biggest frontman in rock, giving an emotionally charged speech about the familial vibe that defines Provo’s music scene. Since that show, I have come to appreciate Glenn’s sentiment. In the greater art community, as a whole, there is a special bond between the people that are trying to make Provo just a little more beautiful and cultured. Like a shared mission—for lack of a better term—to show whomever is willing to pay attention how special Provo is.

Jacob Hall is not someone you would expect to be a catalyst for such a movement. He is something of a reserved, introspective type. Sporting some prerequisite facial hair and chomping down on a slice of loaded pizza from Two Jacks, Hall sits across from me with a look of uncertainty. “I’ve never done an interview before,” he says underneath a nervous laugh, “so be gentle.”

Hall’s résumé is like a who’s who of local bands. Hall has played drums for and been involved with everyone from L’Anarchiste to Bat Manors to Lake Island. “I’m heading over to play with Coral Bones after this,” Hall says as he chews on the delicious-looking slice. “I think I might be playing drums for them now.”

On top of everything else, Hall, and his apparent unlimited source of time, has gotten involved with a project called Dirty Provo, a collective that, among other things, will produce a regular zine featuring art and literary works from locals, and a label that will release new albums from bands like Lydians and Officer Jenny, as well as compilation albums that coincide with the zine.

“So, we have this group of friends and a few of them had this idea for the zine,” says Hall, “and they asked if I had something I wanted to contribute, and so we decided to do the compilation album that comes out with it.” The zine is the brainchild of Lily Lovell and Brette Richmond, two graphic designers and artists steeped in the Provo music scene.

Since SLUG’s meeting with Hall, Dirty Provo has evolved to include a tape label—which will be run by Hall, Adam Klopp (also of Bat Manors), Alex Powelson and, according to Hall, “a few other friends.” For the unrefined, like myself, a tape label is a record label that releases music primarily on cassette tapes. “All cassettes will come with download codes and will be posted on Bandcamp for download as well,” says Hall. “[A lot of the] albums are close to being finished—they all sound great, and we hope to make the releases really special.”

The zine and the compilation album can be picked up at dirtyprovo.bandcamp.com now. At the time that this article was being written, the first printing of the zine was sold out and a second printing was underway. The compilation album, titled dirty provo vol. 1, is an eclectic mix of local artists, made up, mostly, of the Dirty Provo family, immediate or otherwise, and was curated by Hall himself. Featuring songs from the aforementioned Lydians and Lake Island, as well Baby Ghosts and Salazar, the album is not exactly the indie-folk sound that can be often heard at Muse and Velour. “I wanted [the album] to be a little darker,” says Hall, “something that makes people think.”

The compilation certainly does just that. The first track—Lydians’ dizzying take on post-grunge, “Winter’s Fat”—sets an off-kilter tone that continues to barrage the listener all the way through. That’s not to say that there isn’t something for everyone here—despite the odd selection. With songs like the third track, “Erica” by For All The Girls with Bat Manors—a number that could be considered borderline indie pop—dirty provo vol. 1 makes a point of showing off the accessibility of this brand of local music.  Some of the other highlights include “Dodongo” from the instrumental band Temples, the creepy “Holitna” by Lake Island, and “Ghost Privilege,” a raucous, lo-fi jam from Baby Ghosts.

Talking to Hall, it seems that not even he knows where the Dirty Provo movement might go, but being with people he’s close to and doing what he loves, he seems to be happy to go along for the ride. “We’re definitely like a family,” Hall says, “just a bunch of people with similar interests and a similar sense of humor, hanging out and doing stuff.”

The next Dirty Provo zine and compilation album are scheduled to be released some time in mid-August.