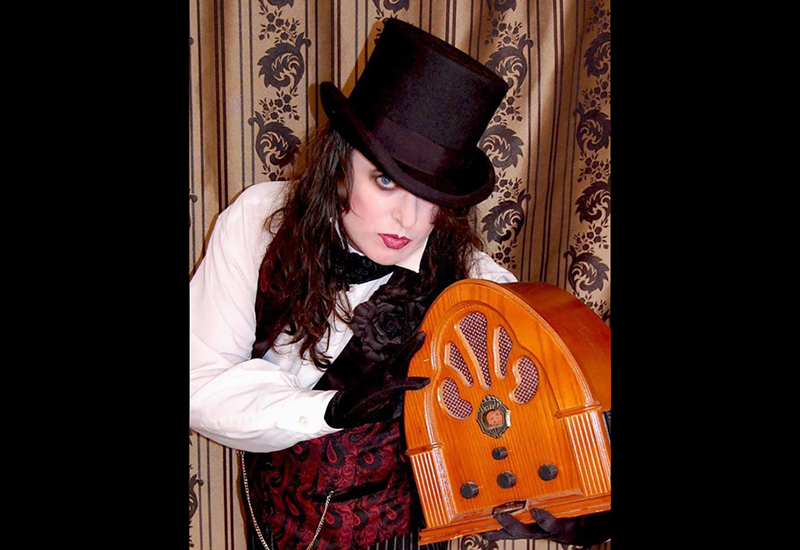 DJ Evil K: Once Upon A Midnight Dreary

We get older. The exterior shows the wear, but inside, if you’re lucky, a bit of the old magic that fueled blind, optimistic dreams of a handful of black-clad shadows remains. Kevin, née DJ Evil K, has always been the one at the center, a hopeful among the cynics. He was not the first DJ I ever danced for, but he was there the night that I discovered the best therapy that money could buy—spinning away in the corner of a room bathed in a whirling kaleidoscope light while “Just Like Heaven” drowned out the pool table punks.

Yet, like all beautiful things, there comes a time when a change of course is necessary. What once was freedom becomes the weight that holds us back. Come Thursday night, DJ Evil K will hang up the headphones, turn off the lights, leave the booth and DJ no more.

Throughout the ’90s, I spent many nights dancing in pointy shoes, leggings, frilled shirts and a cloak (a counterproductive attempt at going unnoticed). Kevin was never far away. I won’t deny a sense of hero worship. I wasn’t alone, a lot of people looked up to him. He was our Jareth the Goblin King. Only, unlike David Bowie’s character, he wasn’t a sinister baby thief. Kevin was, is and I suspect always will be one of the nicest people you could ever meet.

Present day. We’re sitting in Dee’s Family Restaurant in Sugar House, three or so blocks from where Club Confetti, the decaying shadow of Club Xenon, “The Ferrari of Night Clubs,” once stood. The club—long since demolished in favor of a Walgreens—was a safe haven for freaks and rebels in search of clove cigarettes.

“It seems almost like the universe is pushing me in this direction,” he says. “I went to my first club in the autumn of 1985 and I have pretty much been in a club every weekend, sometimes every night of the week, ever since. It just feels like a good time to step back. There’s not one reason. It just feels like it is time. I’ve concentrated on clubs and club life for so long that it is time for me to focus on my own endeavors.”

What I’ve always found fascinating is that Kevin was never interested in making himself bigger than the music he was playing. If you’ve ever known a DJ, watched recent films like Eden or We Are Your Friends or ever stood behind the decks yourself, you know this mentality is rare, almost unthinkable. It isn’t that DJ Evil K didn’t insert his presence into the mix. Anyone who stuck around for occasional end-of-the-evening “Shout at the Devil” dance party or caught him playing the dissident Batcave classic “The Hungry Years” by Marc Almond & Andi Sexgang, knows he wasn’t simply churning out the hits; he was thoughtfully working the crowd. There were many nights when I’d bring in a stack of CDs, each with a sticky note attached with obscure or new tracks. A traditional DJ might have thrown me out of the booth; Kevin worked in a track or two. He’d even placate my occasional tongue-in-cheek demands for more Kylie Minogue by playing her duet with Nick Cave, “Where the Wild Roses Grow.”

“I’ve always tried to not make it about me; it’s about the scene, the club, the people in the audience.”

I suggest that DJing was bestowed upon him, more than it being something that he sought out. Kevin agrees. He had worked for a mobile DJ who frequented weddings, school and church dances. In 1992 the Ritz Club, knowing Kevin’s past experience and vast music collection, decided they wanted to do a Goth night and asked Kevin to DJ it.

“I never really thought about being a DJ,” he says. “I started doing it and felt like I had a knack for it. I always felt like there had been new wave and industrial nights, but I felt like goth never had any representation.”

I started going to clubs around 1992. It was an exciting time. The goth scene was buoyed by newfound success of The Sisters of Mercy, The Cure, Siouxsie and the Banshees and new acts in the UK like Rosetta Stone and Children on Stun. Corpus Delecti came out of France, Australia had Big Electric Cat and America had its own assortment of bands in the likes of Shadow Project, Trance to the Sun, Blade Fetish, Human Drama and The Wake.

“Some think it was in the mid-’80s when the scene came together, but it was in early ’90s it really came into its own. In ’89 I think there were five Goths in Salt Lake City.”

It’s hard not to reminisce. It was such a vibrant and wonderful era. I don’t think any of use realized how special it was, and the heyday lasted for a decade, longer than any of us could have ever imagined, as Kevin took on DJing full-time in 1995 and the scene shifted around between Club Confetti, The Ritz, Sanctuary and Area 51, where it remains to this day. Kevin, and a handful of others like Alan Moss, were the string that kept it all together.

Looking back on his success, Kevin tracks the rise of the likes of VNV Nation and Covenant, as Gothic crowds turned their sights to the electronic EDM of Europe as guitar-centered acts sputtered out. Kevin, who vastly prefers the more traditional goth sound, adapted to the times.

“If you’re just playing to your own taste, it’s a death sentence. I never really played a purely Gothic format. It’s always been a mishmash of gothic, industrial, dark indie music and new wave. It’s more about the mood really.”

In recent times Kevin has seen the scene change quite a bit.

He still engages with the younger crowd, trying to understand their mindset. “They have really broad musical taste. Their ‘goth’ relates more to their own sense of style. They’ll dance to Christian Death and then run upstairs for Britney Spears, which would have been unthinkable. It’s harder to keep their attention.”

For the past few years, Kevin has been searching for someone from the younger generation to come in a take his place. The fact that he has been unable to find the right person to pick up the mantle is one of his few disappointments. It speaks to exactly how rare DJ Evil K really is. Few DJs have careers that span decades.

Thursday, Sept. 10 at Area 51 will be Kevin’s going-away party, followed by the three-day Dark Arts festival, an event that grew from Kevin’s desire to showcase local and national talent; an idea I vividly remember him talking about in Terry Bluth’s basement 20-something years ago. This year’s festival features the the likes of Hocico, Aesthetic Perfection, Angelspit, The Gothsicles and local talent in Tragic Black, Intra-Venus & the Cosmonauts and Kevin’s own band, Red Death Romantics.

Kevin insists that he isn’t abandoning the scene, just being a little more selfish with his time. He’ll continue to write and perform music, release online mix tapes and maybe, just maybe, do a little dancing of his own.