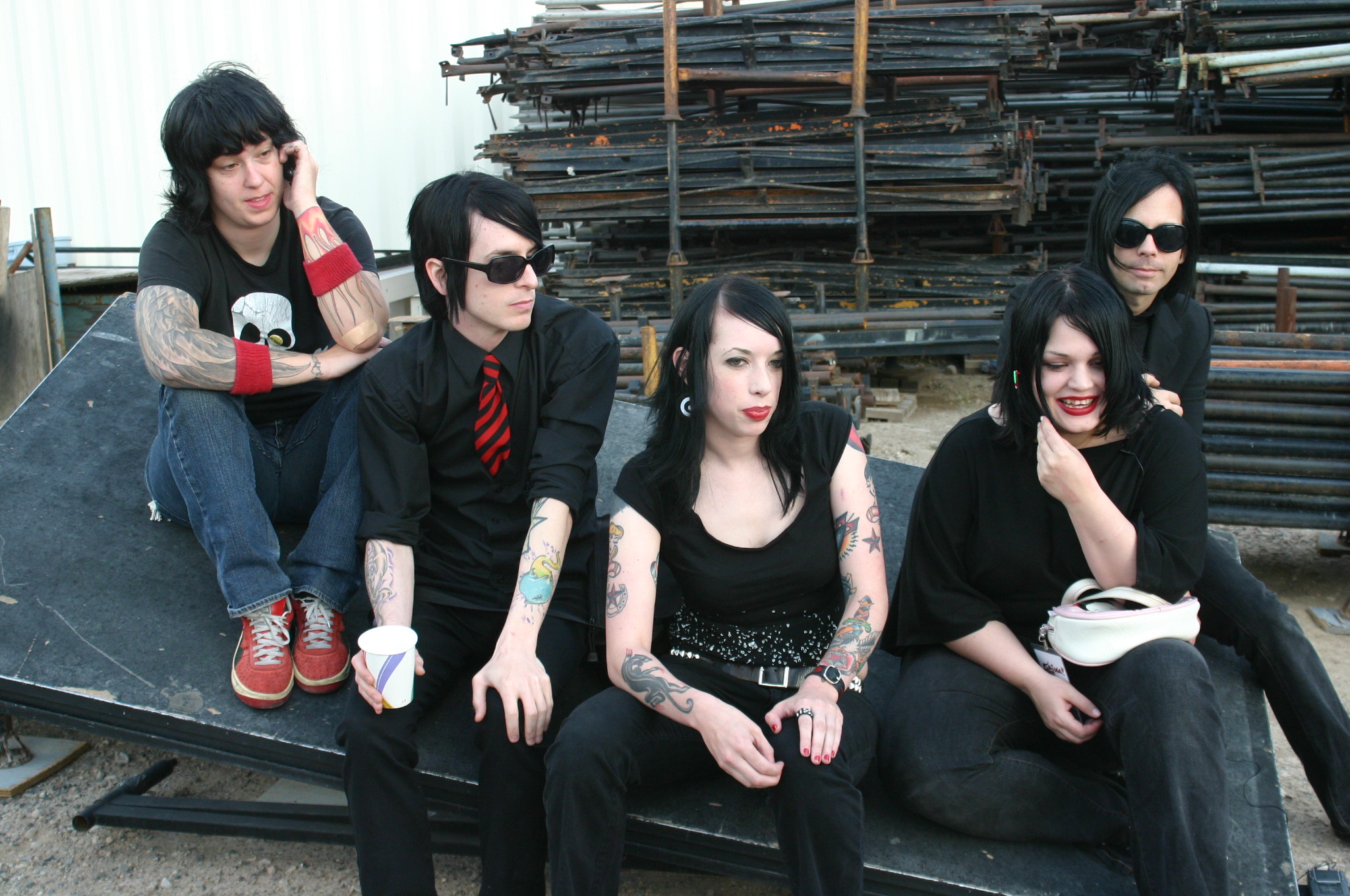 Jessicka, Rickey Lime and Christian Hejnal contemplate the fields of scarecrow stuffing behind them in honor of their upcoming album, So Long, Scarecrow

Scarling.—among scant other bands and scant other people—possess an uncanny ability to soothe a constant fear I have that I am utterly alone on this globe among a sea of yabbering people. In their flush of discordant buzz that recalls My Bloody Valentine, Sonic Youth and The Cure, you can feel the tendrils of another world, an alter-world lurking just underneath a neat blue English pinafore, coming out and wrapping around you from the mouth of a dank rabbit hole. Scarling. possess a rare innocence, a painful nostalgia for things past, better times; but not Eden—no, certainly not Eden. The wide world has kicked them in the ribs, riddled them with bullets straight through the heart, scraped off their skin and told them to give up, but it’s only in wading through excruciating pain that innocence can be reclaimed. So they turned their back on cherubin and the flaming sword and presented their vulnerable heart to the sickening masses.

Jessicka, headmistress of Scarling., dispels gloom when she walks in a room, while at the same time giving off an indefinable air of having been through Dante’s Inferno. Self-mutilation, betrayal, discouragement, drugs, the ongoing millstone of the music industry, various romantic agonies—it’s all fodder for her fire. She is witty, intelligent, down-to-earth, interesting. People approach her shyly because they see that she is a possessor of that rarest of qualities—compassion. She possesses the air of someone that has been through so much that it would be impossible for her to judge anybody. The other members of Scarling. are the same, gazing at you with otherworldly charm, quiet modesty, a bit of shy reserve. Rickey Lime’s (guitar) face looks like it would go nicely in a Victorian locket; Christian Hejnal (guitar) could have backed Joy Division in the primeval childhood of the musical goth movement, Kyle Lime (bass) could have played the lead boy in Black Stallion, and Beth (drums) is by far the best female drummer I’ve ever seen, and yes, that includes Cindy Blackman (of Lenny Kravitz’s lineup).

I first saw Scarling. at the Jackolope in Austin for last year’s SXSW as part of the Sympathy for the Record Industry’s showcase, trying hard to play a heartfelt show to a lackluster crowd, who leant collectively with sharp elbows against a narrow bar, waiting for some garage or blues—any garage or blues—to start. Most of the people cleared out when Scarling.’s dark alt-rock began. Oh, the hazards of playing a label’s showcase—no matter how influential the label—comprised primarily of garage and blues, and playing a honky-tonk venue with a sound system set up for live honky-tonk, not lush, layered oblivion.

They played well, but the sound was thin, and Jessicka’s voice muffled. She flung herself on the floor of the stage as a grand finale after the last number and the rest of the band slowly turned off their amps. I procured a CD off her after the show for review and she smiled widely at me, glad of some support, but seemed troubled under the smile nonetheless.

“After that show, I went back to the hotel room and had a nervous breakdown,” said Jessicka, perched atop a mini flatbed trailer with the rest of Scarling. in between bands at last August’s Salt Lake Curiosa date. Their ears strained for hints of Interpol’s set, due to begin. (“We can’t miss them!” said Jessicka).

Discouragement set in after making the 22-hour trek from the heart of L.A., where they reside, to the heart of a music festival that doesn’t seem quite to know what to do with dark, goth-tinged rock. Austin’s SXSW is the platform for up-and-coming, independent rock of all genres but that. They went back to L.A. feeling defeated at best.

But then, unexpectedly and oh so rarely, sometimes your life can turn on a pin. On the head of a pin, from bad to … an opportunity.

“When we got the news that Robert Smith wanted us to tour with Curiosa, I absolutely freaked out,” says Jessicka. “Having someone you’ve idolized your entire life actually take an interest in your music and give you a shot, definitely is so amazing. I don’t idolize many, but if there was one, musically, that embodied everything that I believed in, at one time and to this day, it would be Robert Smith.”

They were able to meet him the day previous to the Salt Lake date, snatch him at a moment when he wasn’t too busy. You could see the shadowy forms of Scarling. watching The Cure during their set at Curiosa from the edge of the stage. Watching and watching.

During Scarling.’s set at Curiosa, Jessicka’s mood was a sharp contrast to that night in Austin, that honky-tonk bar now about as far away as Pluto. She moodily strolled around the stage with unreal confidence, casually glancing at the crowd during one moment, putting her fingers in the shape of a pistol in her mouth the next. Mimicked pulling the trigger. She rubbed her extra-thick, siren-red lipstick onto her chin and performed with it that way for the duration of the show, drawing the audience to her with a mystique of grotesquery. Offstage, Jessicka sometimes seems restless, ill at ease in her skin—as we all do, but she’s less adept at being fake. Onstage, she gives the impression that finally, she’s found a space where she can feel real. Guitarists Rickey and Christian held the necks of their guitars up after particularly cutting riffs, making the instruments bleed; Kyle pounded his bass; Beth pummeled her drums with viciously playful abandon, face stretched in a primal mask. The sound was full, thick, perfect. The layered melodies combined into a rushing waterfall of sound, crushing everything in its path.

“We’d like to thank Robert Smith for asking us to tour with Curiosa. We are so very, very grateful for this opportunity,” said Jessicka to the crowd in between songs.

Scarling. released their EP Sweet Heart Dealer in 2004 on Sympathy, a follow-up to 2003’s Band-Aid Covers the Bullet Hole single. Although the entire album is gorgeous—my opinion backed by the fact that it made the “Long List” 2004 (73 nominations for the 2004 Shortlist, www.shortlistofmusic.com )—my favorite song on it is the washy, ultra-melodic, melancholy of “Alexander the Burn Victim.” When asked what inspired it, Jessicka said, “9/11, to be honest with you.”

She was stunned by the tragedy as everyone was. “I saw a lot of things right after 9/11 and I created a fictional character in my head. If you go back and read the lyrics, they may sound different than they do now, but I just thought about all the loss and all the different people that were losing things and how they would cope with that loss; and then the song evolved into something completely different [from 9/11].”

They’re set to release a full-length album sometime this year with Beth, who moved to L.A. from out-of-state to replace Gary Snyder on drums. Jessicka didn’t really want to comment on why Gary left/was made to leave Scarling., but did hint at addiction and girlfriends—a deadly combination for bands, it appears. Jessicka beamed at Beth and said how glad they all were to have her.

Tensions of another sort may exist within the band, but probably only in our dreams. Christian and Jessicka were rumored to hate each other, and claimed that in that tension, they found the perfect musical chemistry. In past interviews, they playfully played up that contention.

“We got over that, though. We love each other now,” says Jessicka.

“But you know what they say about people who hated each other …” I darkly suggest.

Jessicka turns to look at Christian and they grin at each other, contemplating. “Hm, Christian, you never know; maybe we’ll get together one day?”

Let’s hope so; what a delicious couple.

Scarling., in their innocence and pain, also have a wily resilience; they’re not all moondrops and bloodbaths. Even amongst the darkest byways, “You can still find the passion and the beauty and the wonder in the world,” says Jessica. “If I ever give that up, I’ll not only stop making music, I’ll stop being a human being.”

Then what would she do if she ever stopped making music, heaven forbid?

“You know,” she says with a smirk, “From doing [music] from such a young age, this might sound like a cop-out, but I don’t know how to do much else. So, until I get that degree in dental school, you guys have me. This is it!”