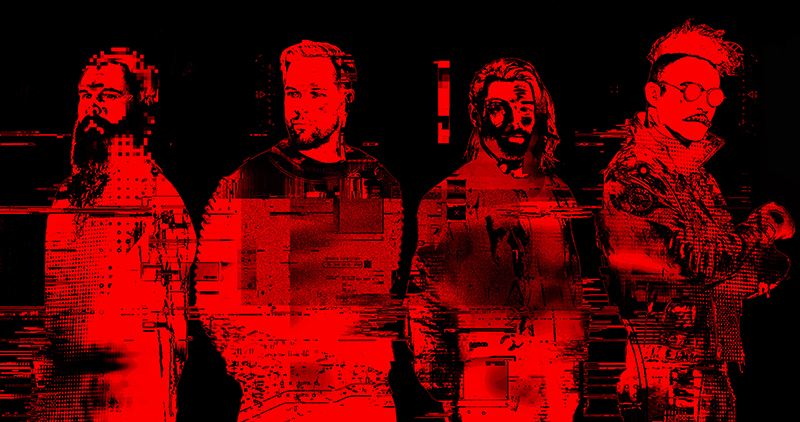 As if overnight, a new industrial act was on everyone’s mind, cultivating an excitement that had not been created for quite some time in the underground music community. 3TEETH produce the sound of metal sheets clashing and the grind of the drill in ways that must be heard—a splicing of an old-school industrial sound with today’s new technology. The band will be making a tour stop in Salt Lake City on Tuesday, July 25, at Metro Music Hall. Ahead of their SLC show, 3TEETH frontman Alexis Mincolla reflects on their seemingly instant success and offers a bit of history about the band.

SLUG: 3TEETH exploded onto the underground community almost overnight. What sparked your interested in performing live?
3TEETH: When we created this project, it was really just born out of the impetus of creating an album that we wanted to personally listen to and the fact that anyone else even liked it was really just a huge bonus. We started getting offers from promoters to play festivals, and that’s when we decided to get a rehearsal space and start figuring out a live set, and the rest was history.

SLUG: How did all of you meet, and when did you start creating music? What other music projects have you been a part of?
3TEETH: We all met at an underground weekly party that I had created back in 2011 called LIL DEATH. It was a really unique event that brought together a lot of likeminded people and served as the primordial black ooze that later gave birth to 3TEETH.

SLUG: If you had to describe your music to someone who has not heard it before, how would you do so?
3TEETH: Lockstep grooves, chainsaw guitars, icy synths and 10 tons of ominous atmosphere.

SLUG: What do you feel that you do onstage or while performing that makes you stand out in your genre?
3TEETH: I’d like to think we bring a lot of intensity to our live performance and that we give everything we’ve got every night we go up there.

SLUG: You have an amazing industrial sound. Who are some of your influences?
3TEETH: Being that there are four of us, we have a wide array of personal influences, but yes, we definitely have a lot of obvious early industrial influence from bands like Ministry, NIN, KMFDM, but we also have a lot of more new heavy electronic influences as well, from people like Gesaffelstein.

SLUG: You mentioned being a fan of Author and Punisher in one of your  interviews. Do you ever planning on collaborating with him? Who are some other bands that you would like to work with?
3TEETH: We’ve talked about doing some stuff a few times, but we’ve just both been so busy doing our own things lately that we just haven’t had the chance. We did, however, manage to create two collaborative tracks with another group called h09909 that we’ll be releasing at some point in the fall. So stay tuned.

SLUG: As a newer act, how did it feel opening up for Primus and Tool?
3TEETH: Well there was probably a wide range of feels at that time, being that we’d never played sold-out arenas, we were touring with bands that we grew up listening to, and Adam Jones of TOOL had personally selected the band. It was just such a huge honor to share a stage with those guys, and it was really an amazing learning experience. Adam, in particular, has become a sort of mentor to me, and I feel unbelievably fortunate to have someone with that type of experience and vision in my corner. Every aspect of that tour was just so surreal and is something that we’re really proud to have as part of our history.

SLUG: As a newcomer to playing in Salt Lake City, have you heard anything about our underground music community here? Being the eclectic bunch that we are, do you have anything special planned for your show?
3TEETH: We actually played in SLC with TOOL at the Maverick Center last year, so we got a little taste of what the vibe is like, and it seemed like a good time. We’re definitely looking forward to a more intimate show this time. Maybe even meet some friendly sisterwives or something.

SLUG: I see you are opening up for Rammstein on a couple dates on this tour. What else is on the horizon for 3TEETH?
3TEETH: Yeah we’ve got a lot of touring till the end of the year, and then we plan on getting back in the studio in November to do some more writing.

SLUG: For your music videos, how do you come up with the plots or themes among the four of you? Do you ever disagree on where you want to take things?
3TEETH: I typically write the treatments for the music videos and then pass it around to the rest of the band so we can send in notes and sure, we disagree on some things, but that tension is sacred. Without the right tension in your guitar strings, you won’t be able to play any of the right notes.

SLUG: As an act that does everything yourself from designs to promotion, do you often find yourself struggling with funding? What are some resources you choose to use?
3TEETH: Creating every aspect of your project is half born out of being broke, the other half being a love for creating and ability to do so. There are a lot of complementary skillsets in this band and collectively, we can make a lot of different things, from self-producing our music, videos, graphic designs, show visuals, etc. In terms of resources, I suppose we are our own favorite resources, and we raise our own funding by creating things that our fans chose to buy and support us. We always also reinvest a portion of our tour funds back into the project with aims for making bigger and better things.

SLUG: Some of your lyrics and stage antics are politically and sexually motivated. Do you do this for shock value, or are you passionate about what is coming across?
3TEETH: Every aspect of this project is charged with direct intention and born out of genuine passion. The lyrics I write are intended to catalyze thought and challenge notions within [a] consensus idea of reality, and if you find that shocking, that’s up to you. I personally don’t think there’s much territory left to transgress or shock people with at this point in history, so I’m certainly not aiming to do so.

SLUG: Why the mustache, and what is hiding underneath those dark glasses?
3TEETH: I’m Sicilian, and the mustache is just part of who I am. I’ve had it for over 10 years, and I plan on taking it to the grave with me. As far as what is underneath the dark sunglasses, there are a lot of things going on, but I believe there’s so much revealed in the eyes that covering them up is really just a way to partition some part of my private self from the project.

Grab your stompy boots and head on out to the July 25 Metro show early, as locals Contaminated Intelligence and Natas Lived will be supporting 3TEETH. It is a show you are not going to want to miss and it may sell out. Jump in on the presale action here. You don’t want to be stuck listening to the concert outside of the club.