In the world of heavy metal, the music of Earth has become legendary. The deafening style of drone doom pioneered by Dylan Carlson in the early ’90s helped to shape an entire subset of metal. But if one were to blindly listen to Earth’s recent aural offerings, metal would not come to mind. “I’ve always thought of genres as something the audience or the marketers place on you,” says Carlson. “To me it’s always just been rock n’ roll, and that’s enough.” 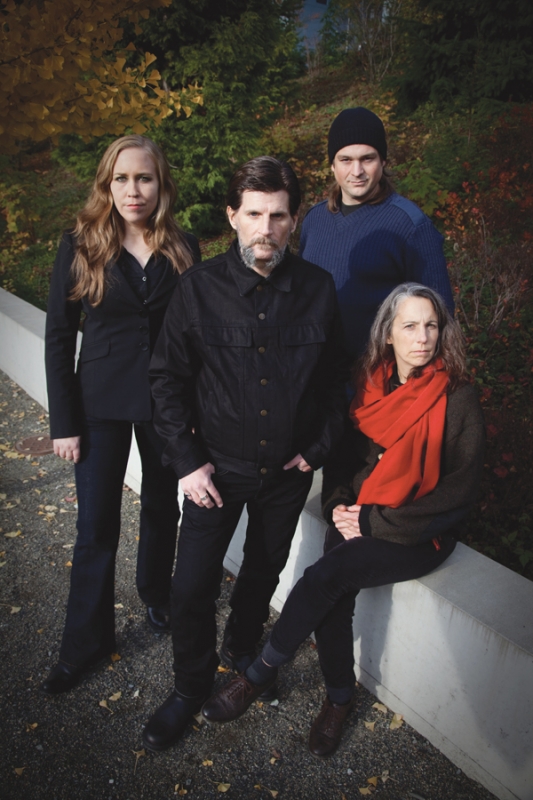 Earth released part two of Angels of Darkness Demons of Light in Feb. 2012

In the world of heavy metal, the music of Earth has become legendary. The deafening style of drone doom pioneered by Dylan Carlson in the early ’90s helped to shape an entire subset of metal, influencing the likes of Boris, Sunn O))) and a large contingent of the Southern Lord Records stable—a stable to which Earth currently belongs. Hell, the band even takes its name from the original incarnation of Black Sabbath. But if one were to blindly listen to Earth’s recent aural offerings, metal would not come to mind—perhaps folk, blues or even jazz may, but not metal. “I’ve always thought of genres as something the audience or the marketers place on you,” says Carlson, the sole continuous member of Earth throughout the group’s existence. Drummer Adrienne Davies echoes this sentiment: “I think it’s pretty hard for us to fall rigidly within the lines of any specific genre.” Carlson says. “To me it’s always just been rock n’ roll, and that’s enough.”

Even though it has been seven years since Earth substituted their Sunn amps and smashed guitars for the sparse, moody and strikingly non-amplified tones of Hex, their style of music is still arresting. Carlson and Davies have been the constants, Davies’ glacial drumming anchoring Carlson’s bluesy guitar and Earth’s rotating cast of additional musicians to the spooky soundscapes of each Earth album. There’s a sense of space and weight as the carefully calculated instrumental arrangements resonate with parts of the human brain that language never could. “To me, music sort of transcends just writing about something or speech because it conveys meaning on different levels,” Carlson says. “Music is the oldest form of communication and interaction among humans other than hunting or sex. There’s an ecstatic quality to it that transcends any sort of labeling.” Even though the band has left behind the constant layer of feedback that permeated their early work, they continue to be defined by the fully engrossing nature of their music. “We still have the heaviness, but there’s more to it than the heaviness now,” says Davies. “Before, it was very thick substance that no light ever got through. Now it’s more [translucent]—Light can shine through it.”

The band’s most recent effort, Angels of Darkness, Demons of Light, was released in two volumes—part one in February 2011 and part two in February 2012. Carlson and Davies were joined by bassist Karl Blau and cellist Lori Goldston. The addition of the cello introduced an interesting dynamic to Earth, bending the Western-tinged, organ-heavy style of the band’s previous album, The Bees Made Honey in the Lion’s Skull, into something that invokes British folk music and classical while retaining the band’s trademark sense of weight. However, the decision to split the recordings from the Angels of Darkness sessions into two separate releases was not pre-meditated. Before going into the studio to record the album, Carlson became quite ill, though he has since recovered. “At the time I thought this might be the last Earth record, so I wanted to get as much done as possible,” Carlson says. Working once again with Stuart Hallerman, who produced Earth 2 way back in 1993, the band became instantly comfortable and was able to record all of the songs they had prepared much more quickly than expected. With extra time and extra tape, Earth made the decision to record a number of largely improvised songs—a first for the band.

Much of the power of Earth’s music comes from its precision—the songs are incredibly slow, but that makes each strum of the guitar and each hit of the drum so much more important. “In our early albums, especially Hex and Bees, the sound we were going for was much more dense, it was much more of a studio project. There are just so many layers, overdubs, guitars, Wurlitzer, lap steel, so much going on that the drums had to be absolutely bare bones, sparse, precise, so restrained just to leave room, otherwise it would too much of a mash up of different things going on,” says Davies. The opportunity to improvise was somewhat freeing for Davies. “We wanted a live sound that breathed, where there were open spaces—something that felt like four different musicians just playing together in a room. That really let the drums step forward and become almost a lead instrument. I could throw fills in without thinking I was muddying the mix and I could play a lot more spontaneously—I didn’t have to have absolute restraint at all times.” However, the band were no strangers to improvisation, as Earth’s live shows often see the band altering their songs substantially. “It’s so much more exciting if you’re on tour for six or eight weeks playing shows every night to know that you have that space to develop, you have somewhere to go to,” says Davies.

The concept of music changing and growing as it is being produced also informs Earth’s attitude towards music as a tangible object.  “It’s unfortunate that we have to engage in the fiction of music ownership, but that’s the world that we exist in at the moment,” Carlson says. Davies says, “I’m in a real struggle with myself about it because I do believe music shouldn’t be controlled, bought and sold. The other side of it is if you want musicians to be able to do what they do, they have to be able to pay for insurance and pay for a van and all of these other things.”

To combat the double-edged sword that is music ownership, Earth has become dedicated to making the tangible manifestation of their music something their fans will actually want to own. “I hate to sound like a businessman or a mercenary or whatever, but nowadays with the downloading and all that, you have to do something with your merchandise that makes it special and makes people want it,” Carlson says. The cover art for recent Earth albums has been particularly great, and Southern Lord is well known for the quality of their vinyl releases and packaging. “I like vinyl. I’m an old fucker. When the vinyl comes out, it feels like I’ve actually done something. Even in the early days with the first Sub Pop EP, there was no vinyl,” Carlson says. “Yeah, I got something out and I was excited about it, but I didn’t really feel like I had done an album until Earth 2 came out on vinyl.” Both Angels of Darkness albums feature cover art by Stacey Rozich, and the vinyl versions have images of her art etched on the D-sides. “I used to be a control freak about [the cover art], especially in the Sub Pop years,” Carlson says. “I designed the covers. Now I find an artist I like and pretty much let them do their thing. We usually give them an advance copy of whatever we have available. I do what I do and I let other people do what they do, and that seems to work better—I’ve yet to be disappointed by it.” It seems Earth’s fans have yet to be disappointed as well, since vinyl copies of their Southern Lord albums are increasingly harder and harder to come by.

This month, Earth will embark on a European tour. Rejoined by Karl Blau, who was absent from the band for much of 2011, this tour will mark the first time that Earth has played much of the material from Angels of Darkness, Demons of Light II. After the tour, Carlson will head to England to record his first solo album outside of Earth. “It’s gonna be English folk songs, or at least my poor interpretations of them, especially when dealing with occult themes [such as] human and faerie interactions,” Carlson says. “I’m gonna do some field recordings at various sites of such occurrences in England. That’ll probably be primarily acoustic instrumentation. I have some friends who are going to do the vocals, it’ll be all female singers.” The ambitious project was successfully funded via Kickstarter in early February, and it will also include a DVD of Carlson’s performances at these sites as well as an illustrated book.

Maybe Carlson’s solo project will finally disassociate Earth with their early sound and move Carlson firmly away from the time when he included muscle cars on his album art. Or maybe this will further ingratiate him with the metalhead crowd, who have shown an interest in the occult since the days of Sabbath and Led Zeppelin. Ultimately, though, neither of those things matter. If nothing else, the music of Carlson and Earth has strongly emphasized the fluid nature of music and understanding. At the end of the day, only one thing matters, according to Carlson: “Like I said, that’s always why I’ve liked rock n’ roll—that ecstatic feeling it gives you.”