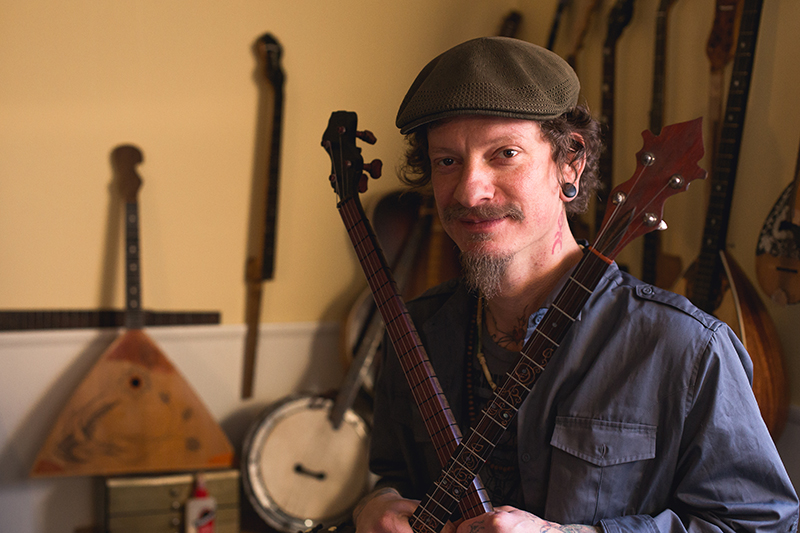 “People kind of know me as the instrument weirdo around here,” says Wallace Mecham, a local musician and instrument maker who experiments mainly with banjos. However, Mecham’s banjos are not the typical banjos that can be found in music stores—some are also infused with technology often used in Eastern instruments, such as the Turkish saz, a predecessor to the mandolin with a ringing, fluid sound. Combined with the “twanginess” of the African-origin banjo, these creations have a unique sound that can be modeled after music from different regions, based on the way Mecham sets up the frets and bridges. Mecham’s banjos often reject the tempered scale, the standard in Western music, as he makes his own frets from fishing line in order to tweak the scale, making the instruments capable of playing quarter tones, which is more of a trademark of Eastern music. The result is a collection of unique instruments that blend the sounds of Eastern and Western music and draw from the best elements of different musical regions.

For Mecham, the interest in Eastern instruments started early. “I primarily got into [other cultures] being raised around an Indonesian family and really good friends with a Persian family,” he says. “I just really took a liking to ethnic cultures and Romani music. I started playing with Greek people and Middle Eastern people.” Mecham furthered his interest by attending luthier classes from Tom Midland of Local Music, and often takes on the challenge of fixing and modifying rare instruments that other luthiers may not be able to fix. “I find that banjos and ethnic instruments have a lot in common with strings, tension, bridges, so I just started fixing them wherever I go, and people just started bringing me stuff to fix,” he says.

One such instrument was the Japanese shamisen, which bears a lot of similarities to the banjo but has a squarish body and pluckier sound. One of Mecham’s more recent projects is a fretless banjo modeled after the Japanese shamisen, though most of the instruments he makes can be slightly altered to get a completely different sound that can mimic the “dialect” of music from any number of regions. Although Mecham considers himself mostly past his purely “experimental” phase, the banjos he makes are an ongoing process, constantly evolving into something new in order to procure the sound that he is trying to find. “I’m on a musical adventure, and I’ve had to build instruments to aid that,” he says.

By challenging the notion of what a traditional banjo should sound like by Western standards, Mecham hopes to create a hybrid of the Eastern and Western styles of music. While the quarter tones lend his banjos an Eastern sound, he plays with rhythms that are not traditionally found in eastern music. “I’m playing with a Western perspective, so I don’t play with an Eastern rhythm,” he says. “What I’m really trying to do is get East-meets-West, because I’ve always seen the best music come out of hybrid music.” Having been a traveling busker in the past, Mecham has noticed a universal curiosity in the music he creates solely on the basis that it is so different from what most Americans have
heard before. “People respond to it well, and they really want to hear it because they’re not used to hearing it,” he says.

For those interested in possibly owning one of Mecham’s creations, he suggests being involved in the process in order to individualize the instrument: “I would encourage them to do what [Midland] at Local Music did for me,” he says. “He didn’t want to do all of the work for me; he wanted me to learn, be involved and build them. So far, the people I’ve built banjos for have actually helped me to build it.” This process goes along with actually selecting what kind of sound you want to imitate with the instrument. “Pull out your world music collection [and] find what you’re interested in. When you pick out your instrument, figure out what tuning it’s in and play to what you listen to instead of trying to learn through books,” he says. “It’s easier to learn by ear.” As the majority of banjo players are soloists, Mecham often finds that improv is the best way to perform his banjos, taking an intuitive approach to the music he makes. “It takes inspiration, some interest and drive,” he says. “If you’re going into it wanting to know theory and what you’re doing, it’s harder. You kind of just have to go into it intuitively, wanting to mess around. [It’s] an adventure.”

Mecham’s philosophy of modifying and evolving banjos modeled after Eastern instruments is something that arose out of his departure from the “buying culture” in America, where people are quick to dispose of old instruments and buy new ones that are mass-produced. “I’m trying to kind of promote a reuse, rethink, reinvent culture,” he says. “I come from the punk rock, do-it-yourself background. I really want to put that into this.” Mecham often finishes his banjos with a personal touch of engraving, hearkening back to the older, more personalized way of making instruments. Mecham can be found on Facebook under Wally Banjrz.

Editor’s Note: The original version of this article incorrectly stated Mecham’s Facebook page name. The correction has been made.