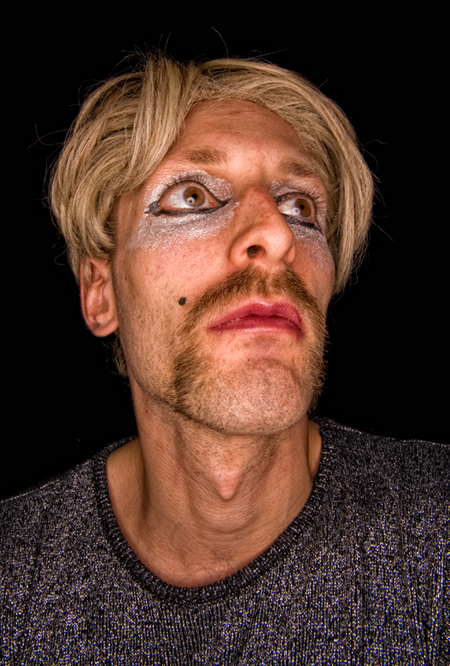 “One day five years ago I was watching America’s Scariest Police Chases and it was hosted by this insane sheriff from somewhere with really white teeth, this tough dude. And I thought, ‘What if somebody wrote a novel from this dude’s perspective? What would happen if someone did that and embodied this person?’ and the ideas went from there. So I actually did write a novel, not about him but about Meryl Streep, but that’s another story. I wanted to embody a famous person and write songs not about my own life, but about the trials and tribulations of Molly Ringwald and Christopher Reeve. I thought, ‘Wouldn’t that be something new and unexpected?’ And it just kind of stuck. Then I thought that if I was going to embody a person I couldn’t get onstage in cargo pants and a sweatshirt. I had to really do it and be the person. I went and got a dress and got a wig and got my shit together. You can’t tap-dance with no tap-dancing shoes.”

[Edi Sedgwick] This straight-from-mouth explanation from Jason Moyer (of Dischord bands El Guapo and Antelope) explains the origins of his new project, which is the reincarnation of Warhol Girl of the Year 1965 Edie Sedgwick, into one-girl musical superstar form. That’s his “Vaudevillian shtick.” His mission is a bit more complex, and comments on the state of music in general.

“I started to wonder, ‘What is the point of writing music?'” he told me. “I was in DC, where it’s a political community with a lot of political music, and I would go to see bands who would be in your face about their politics. It’s not that I like George Bush; it’s just that I find anti-Bush songs dogmatic and uninteresting. At the same time, I felt my songs should be about something. I don’t like instrumental bands or bands that are overly-ironic. So I thought, ‘How can I tread this middle ground between postmodern irony and modernist dogmatic politicking?’ And so I said, ‘What I’ll do is write serious songs about a particular subject. I’ll write a song about feminism, but make it about Lucy Liu. I’ll write a song about how Martin Sheen is the true cultural president of the United States, but it’s about the West Wing.'”

Her Love is Real…But She is Not (Desoto), Edie’s first solo album, comes out on March 21. It’s a 40-minute electronic dance-party extravaganza, and with song titles like “Christian Slater,” “Harrison Ford” and “Haley Joel Osment,” the track listing reads like the cast credits of next year’s summer blockbuster. I asked Jason how he picks the subjects for his songs. He said, “Certain things stick in my head. I was doing the whole drag act, so I got to thinking about Jamie Lee Curtis and the rumor that she was an hermaphrodite. I thought that would be interesting to talk about, so I wrote a song about her. Then I was writing songs about brothers and sisters and thought, ‘What if I wrote a song about celebrity brothers and sisters and the dilemma that I would face if I had to sleep with one of them but I couldn’t decide which one because they’re both really attractive?’ So I wrote a song about Justine and Jason Bateman.

“At the same time, the lyrics on this new album are serious. Some of them are pretty abstract, but when I sing about Tom Hanks I’m not saying, ‘All right! Bonfire of the Vanities! All right! Saving Private Ryan!’ I’m singing about Marx and economics and how it relates to Castaway.”

Justin and I spoke about a central theme to his project, the idea of “celebrity,” the phenomenon of people who we have never met occupying out time and minds. He says, “It’s a fundamental issue in the age of the recorded image, whether that image is a musical image, a photographic image, a filmic image or a web image. There came a point around the turn of the last century, or even at the emergence of the written word, when, before then, we interacted with each other face to face, but once you have representations of actions, a sound on tape or an image on film, you look at that and say, ‘Is that Sean Penn in The Interpreter, or is that Sean Penn that married Madonna? Or is that Sean Penn that’s married to Robin Wright Penn?’ There’s also the Sean Penn that was in I am Sam, there’s also the Sean Penn that won an Oscar for Mystic River. Who is the real Sean Penn? It’s all a world of signs and signifiers and that’s all the world is. And to pinpoint ‘This is Sean Penn’ or ‘That’s Sean Penn’ is impossible.

“That’s the idea of celebrity, but it’s also sort of a basis of human interaction. If you think about your interactions, your father or your mother or your brother, do you really know these people? What are they thinking about? I used to be a social worker, and I would go see my clients who had problems. And I would try, through this sort of bankrupt, broken medium of language, to get inside their head and help them and understand what their problem was, and say the right thing at the right time. And it’s just impossible. You can’t know them. You can’t plug into their heads Matrix-style and help them. What you can do is kind of swipe at the problem like a kitten trying to swipe at a ball that’s being pulled away from them. That doesn’t really have anything to do with celebrities, that has to do with the world and the way we are. We can’t read each other’s minds. We can’t consume each other’s beings. With celebrities it’s even worse. Of course I’m not going to know Nicole Kidman from the dress she wears on the red carpet, but I feel it’s still productive to comment on the way she chooses to present herself, or the choices she chooses to make because she’s a public figure, and for better or worse, she’s part of our discourse. I mean, Kim Jong Il is, but Nicole Kidman is, too.”

Of all the people he could’ve chosen to reincarnate, Justin’s pick of vapid 60s It-girl Sedgwick is practically perfect, if nothing else as a vessel to remark upon the way in which both his subjects’ onscreen personas and their other-world real-life antics burn their way into our starstruck eyes through projectors and the pages of People magazine. Edie was a living piece of Warhol pop artwork, an ever-changing blank canvas upon which was painted whatever bit of pop culture Andy saw fit. In a way, we’re all that canvas. Justin says, “Edie’s story is a story of vacuousness and reflecting those around her. Nobody knows why she was famous. She and Andy Warhol would go to art openings and would be mobbed. I understand why Warhol would be mobbed but why would she be mobbed? Just because she’s around. She’s this empty figure, this mirror, reflecting the world around her. Our first album was called First Reflections, we’re just going to reflect everyone we see and write a song about them. Everybody’s got a story. I can write a song about anybody.”

However heavy Justin’s ideology might be, this thick soup of post/modernism, celebrity, signs and signifiers didn’t quite hold the clout live on stage that it does on the page. “For awhile [in concert] I was using an iPod for my backing music,” he says, “which was funny because it was a gimmick. But the shows started to seem a little bit empty. I would try to jump around and be crazy but it didn’t really fill up the room. Some friends of mine were interested in making film and these songs that I’ve written lend themselves well to short videos. So these two guys cut about 16 short films that go with each song. Now I go on stage with a laptop and a video projector and I project these films behind me and I basically sing over a DVD. That way I can do my thing and enjoy the song and when I’m boring or the song’s getting too long there’s this visual stimulation that fills up the space.

“We worry that we might run into [copyright] trouble with the videos we shoot behind me live, but we don’t sell them and they don’t make anyone look really bad. I have a song about Arnold Schwarzenegger and in the video it cuts between him campaigning in California and then cuts from The Terminator, but it’s not like we cut between him campaigning and then Hitler or anything.”

If any part of this article has made you excited, then great for you and I and Edie and Justin. If the idea of a cross-dressing reincarnated cultural theorist isn’t your piece of hair pie, then that’s fine too. “It’s funny because my other band [El Guapo] went to shoot a video and I talked to the makeup girl for 20 minutes about blush. I guess for most band dudes, that’s not the same. And I’m excited about that. I don’t want to be a band dude. I take pride in the fact that, for better or worse, a lot of people wouldn’t do what I do. They’d think it’s stupid or they’d think it’s silly or they’d be uncomfortable with it. My shit might suck but at least I’m comfortable with it and that makes me feel good.”

If you’ll be in Austin for SXSW, Edie will be there. If not, check out www.ediesedgwick.biz and Her Love is Real…But She is Not.