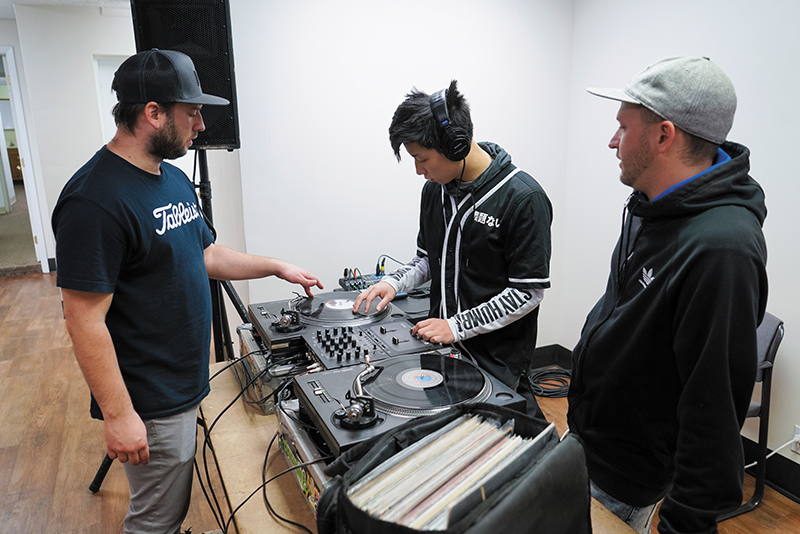 Educating the Next Generation of Disc Jockeys

Looking at the Hip-Hop Education & Resource Center (HERC) located at 2505 S. State St. in Salt Lake, you get a sense of the raw and organic style of teaching that goes on here. It’s a one-story building, including a lobby and full studio room where both DJ and b-boy classes take place. Inside, the HERC offers a casual atmosphere, the kind of place to get work done while still being able to just hang out and relax. DJs SkratchMo (Gabe Ghent) and Chaseone2 (Chase Loter) are DJ’ing teachers under the wing of the Bboy Federation, which organizes and facilitates these classes. The Bboy Fed started with the goal of reviving b-boying in Utah as the scene was starting to dwindle. Extending their mission to DJ’ing this past December, these classes present a way to keep traditional DJ’ing alive in the community while showing it to a new generation.

SkratchMo’s interest in music stemmed from an early interest in playing the piano and drums. “Growing up … I was heavily influenced by soul and funk music, all while finding an interest in progressive rock,” he says. “My father played in a progressive rock band.” He would later find inspiration from A Tribe Called Quest’s album Midnight Marauders, eventually buying his first setup in high school. Chaseone2 was influenced early on by graffiti and skateboarding, and would find hip-hop through his brother and his friends. After seeing kids bringing their setups to school and scratching at lunch, he knew that this was what he wanted to do. After putting in years of DJ’ing and playing with many local acts, both DJs felt that it was time to give back to the local scene.

DJ lessons are a unique and almost uncharted territory. While they’re still discussing a base curriculum, there are tons to learn from these two DJ gurus. “The word ‘DJ’ means so many different things to different people,” says SkratchMo. “If you want to understand the foundations of hip-hop, the history of hip-hop, the history of the hip-hop DJ, we can help you out. Mixing techniques, scratching techniques, beat-juggle techniques—if you have a desire to learn those, that [desire] is what you need.” Classes are held from 6 to 8 p.m. on Wednesdays for $10 at the HERC. Participant age can range from 12 and up, and the DJs express that they can work with any skill set. “It doesn’t matter what your skill level really is,” SkratchMo says. “Maybe you just really love music or you have a radio show or something, and you just wanna learn how to fade songs in and out smoothly, or maybe you’re a DJ who’s been DJ’ing for 10-plus years and still can’t do a specific technical scratch or juggle pattern. You don’t really need to know much.”

Luckily for those who don’t have the equipment or aren’t sure if they are ready to commit to their own setup, the classes don’t require participants to bring any equipment and allow them to practice on SkratchMo and Chaseone2’s setups. Participants can expect to work on anything from the early basics to mixing and scratching. Expect to learn and appreciate all styles of hip-hop, old and new, when in class: “You’re gonna get schooled on every decade of hip-hop until now,” says SkratchMo. Both DJs and the Fed want to continue to educate everyone about the roots of hip-hop and the forms therein. As a part of the Bboy Federation, the DJs hope to eventually interact with the b-boy classes as students’ interests and skill sets start to develop. The eventual hope is to integrate students of the DJ’ing classes into Bboy Fed showcases.

It’s easy to understand how important hip-hop and the well-being of the scene in Utah is to SkratchMo and Chaseone2. Much as the Fed’s goal was to bring back and educate the b-boy community in Utah, these DJ classes educate and grow the community, bringing the hip-hop scene, as a whole, together. It’s more than just a genre of music for Chaseone2 and SkratchMo—it’s a lifestyle and a livelihood. These two DJs are constantly performing and teaching. It’s all about growing and progressing, whether they are furthering their personal education or leading someone to eventually buying their first setup. Chaseone2 says it best: “If we have 100 participants, and at least one gets it, then job well-done.” Both DJs continue to perform in Utah, acting as staples in the local scene. Chaseone2 is constantly backing SLUG’s own Distribution Manager, Dusk. SkratchMo works often with acts like Atheist and the House of Lewis, which includes helping them represent Utah on America’s Got Talent and performing what Reba McEntire called “the most depressing song [she’s] ever heard” (which is ironic, considering that she is a country music artist).

We are at a time when rap music has become less about the one behind the turntables. The term DJ means something completely different from its original disc jockey beginnings. Once I left the HERC, I understood that a DJ needs to be the one who supports the local scene, playing the local artists and bringing the hip-hop community together. For more information on these classes and on Hip-Hop Education & Resource Center, check out bboyfed.com.