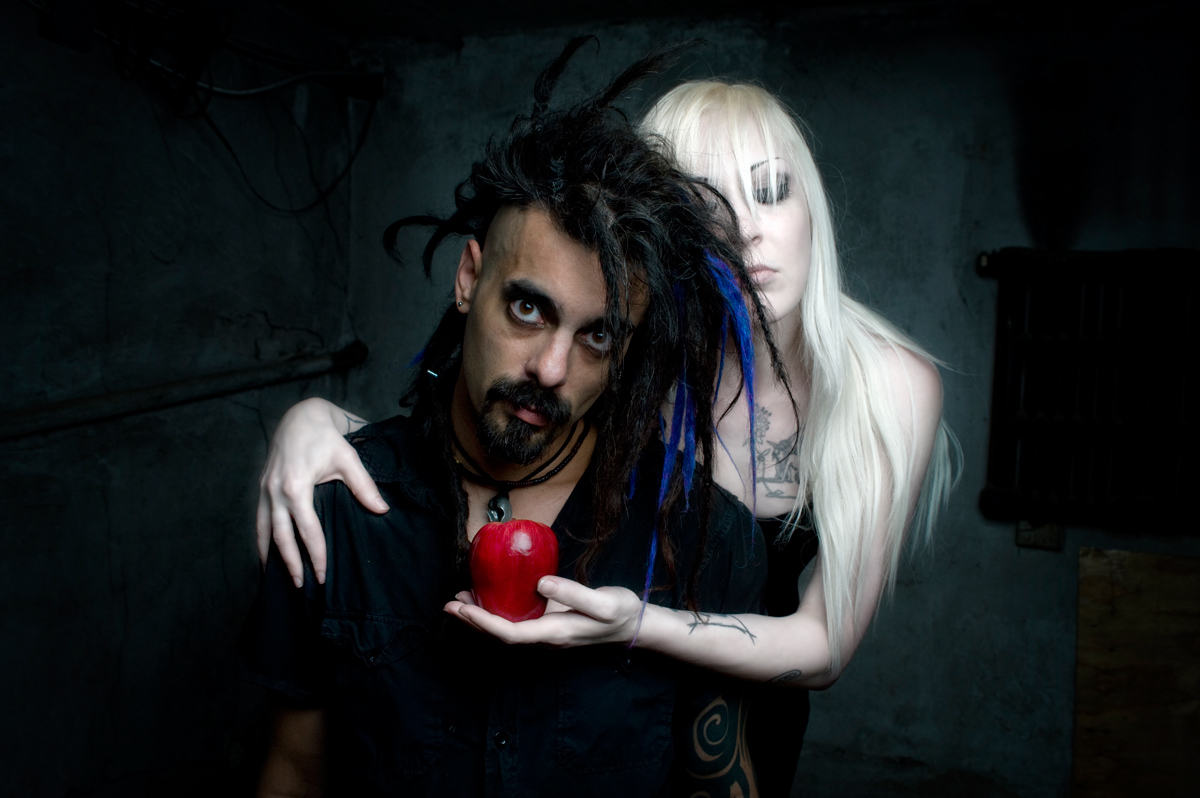 The Eloquence of Ego Likeness

With their published writing works and artistry, Metropolis Records’ Ego Likeness have quite the myriad of creative resources to tap into. The band has drawn crowds to their shows here in Salt Lake City with their mythical lyrics and driving industrial sound.

Even the musician lifestyle has fairy tales, as Ego Likeness’ bandmates, writer Donna Lynch and artist Steven Archer, are one of the few touring married couples in the underground music community. We here at SLUG Magazine were grateful that Ego Likeness took time of out of their busy schedule to correspond with us about The Crossroads Tour, which will make a stop at Area 51 on Thursday, Nov. 10. SLUG: What was happening in your lives musically before Ego Likeness?
Donna Lynch: Not much. After putting in many years of training at Peabody Prep, I didn’t have any idea of what I wanted to do. When I met Steven, he pushed me to start writing and performing with him. I’m glad I agreed, though it took some convincing. Performing the works of famous composers is easy. Standing in front of people with material you wrote can be terrifying.
Steven Archer: I’ve been in and out of bands since I was 20. None of them were particularly good, but I learned a great deal about what not to do.

SLUG: Could you speak to the process of creating The Compass EPs?
Archer: Writing full-length albums has always been a very long process for us. Our hope with the EPs was to put more work out at a faster pace. It didn’t quite work out that way, but that’s ok. The other thing that’s nice about EPs is that you can explore different styles that might not fit quite as well as part of a full-length.

SLUG: What other musical projects are the two of you involved with? How do you balance that with Ego Likeness?
Archer: I have a few other projects. Stoneburner a tribal, industrial, dance project, and Hopeful Machines—which is a clearinghouse for everything else, and in the end, tends to be more of my own personal soundtrack and somewhat public diary than anything else. Both of us perform with other acts from time to time for fun. The trick with balancing is just remembering what hat you are wearing at any given time, and not taking the “Ego Likeness hat” off until we have accomplished what we set out to do.

SLUG: What is on the horizon for Ego Likeness? What new releases are in the works?
Archer: When we get home, it will be time to put on the aforementioned Ego Likeness hat and get to work on a new album. Donna has the concept nailed down, and I think both of us can hear it calling from the ether, waiting to be born.

SLUG: Donna, what type of writing do you prefer to do, and why?
Lynch: I usually describe it as dark fiction, because when you say “horror,” it brings to mind work that is much more in-your-face than mine. I like creepiness and subtlety. I’m a huge fan of body horror, which has crept its way into some of my work. And I enjoy working traditional ghost story and folklore formats into contemporary pieces.

SLUG: In your 11 years of touring, you must have had some fantastic experiences and shows. What have been your favorites?
Lynch: The ones where people show up! It’s very hard to recall a favorite show, because there have been so many I felt good about. Knowing that people had fun or were moved in some way is very rewarding. Besides the performances, my favorite parts of touring are the long drives, especially in the west. Recently, I drove a good portion of the Pacific Northwest in total silence. Steven was sleeping, and I turned off the music. It was very peaceful, just watching the road and the scenery, alone with my thoughts. You don’t get much alone time on the road.

SLUG: Donna, have you faced any issues as a female musician in a male-dominated profession?
Lynch: I haven’t experienced much sexism right to my face, which is something I know happens to some of my other female musician friends. Rather, I hear generalized statements that I find strange. Things like, “I don’t like female vocals, but you were good.” It’s so odd to me that someone would simply not like ANY female voice, like in the entire history of music.

I get guys acting surprised that I’m managing the tour and especially that I do the majority of the driving. I’ve gotten, “Oh it’s nice you don’t have to carry anything during load-in.” I replied that yes, it was nice, considering I just drove 12 hours after playing a show the night before, and everyone else got to sleep. It’s an arrangement that my band and I are happy with, but I resent it a little when people assume that because I’m a woman, I don’t have to do as much as the guys—just show up, look pretty and sing, I guess. I have to do that after making the generally exhausting drive, setting up merch, keeping our affairs at home in order, doing paperwork, and sound checking. All of that doesn’t leave much time to be a diva.

SLUG: Steven, what prompted you to start creating art for your merchandise on tour?
Archer: Fine art has always been my main focus. I have a degree in it from the Corcoran School of the Arts and Design in D.C. Creating things, be it 2-D, 3-D, audio, video, it’s just what I do … all the time. The location doesn’t really matter. Generally, if I end up sitting somewhere for any period of time, I’ll pull out a sketchbook and start working. The other reason is more practical and less obvious. Because, in the world we live in now, CDs have no value. People still buy them, but a musician on the road can’t expect to make a living off of that anymore. So in addition to filling the down time, it creates another income stream. And it allows fans to buy something that is literally unique. I sell a few prints here and there, but most of the work I sell is original.

SLUG: What do you use for your canvas?
Archer: Well, for paintings I use canvas as my canvas. But for my smaller work, I build “sketchbooks.” The sketchbooks are made from other books ahead of time, each page has pictures and other ephemera taped to it that I use as starting points for my own work. It’s a very efficient way of idea generation and lends itself to creating a large body of work very quickly.

SLUG: When it comes to art, who is your favorite artist?
Archer: As far as living up to my definition of an artist, I would have to say Picasso. Which is funny, because I’m not a huge fan of his work. I mean, it’s very good—it’s just not to my taste. However, the thing about Picasso that I find particularly inspirational as an artist is how he worked in many styles, changing and exploring, pushing himself and his craft. He was a brilliant technical artist … but he was confident enough to explore and expand Cubism just because he found the idea interesting. To me, that is a real artist.

SLUG: What music do you listen to when not creating?
Archer: Very little, actually. I seem to be at a place in my life where I find it difficult to relate to most music. There are exceptions, much of which I have listened to for years: The Swans, older Skinny Puppy, Roger Waters and Peter Gabriel. More recently, Fever Ray and Zola Jesus, to name a few.

SLUG: Do you have anything special planned for the show here in Salt Lake City?
Archer: We love playing here. SLC has always been very good to us. Our set changes from night to night, so I’m sure something interesting will happen.

Supporting Ego Likeness’ Nov. 10 show at Area 51 will be the Austin-based Adoration Destroyed. This is certainly a night of music that you will not want to miss, as these acts also include members from Chant (Alvin Melivin), 16volt (Erik Gustafson), Mindless Faith, Velvet Acid Christ and Bile (Rick Furr). Art and industrial music—you could not ask for more.