EMA opens the Satellites for SLC: An Interview with Erika M. Anderson 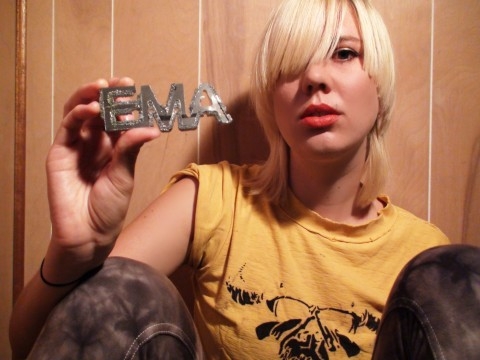 Despite the themes of disassociation and anxiety that she explores on her recent album The Future’s Void, Erika M. Anderson—otherwise known as EMA—is looking forward to connecting with her fans in Salt Lake. Before kicking off her tour, Anderson took some time during a rainy Portland afternoon to chat with us about virtual reality, H.P. Lovecraft, and the all-seeing eye of social media.

SLUG: What inspired your introspection into the ideas of retaining humanity in an increasingly digital world that you explored on The Future’s Void?
EMA: I had just gotten off of a long tour and a pretty intense press cycle, which was not something I was prepared for. It’s hard for anyone to prepare for something like that. It left me feeling conflicted, happy, angry, weirded-out, and a bit ashamed—all of which came out in the album. I had also recently moved from Oakland to Portland and I didn’t know a lot of people. In a lot of ways, I was trying to keep my head down and return to some semblance of a normal life after touring.

SLUG: That really comes through on the album, especially on “3Jane,” which feels like a very personal song.
EMA: It’s hard to point to a specific thing that inspired that song. It was just a feeling. Also, with social media reaching a turning point, it created this idea that everything had to be better and faster with more viewers and more listeners. To be honest, the idea of racking up as much attention as possible might not be something that everyone is comfortable with. I feel like it can have weird effects on your psyche. I think everyone recognizes that you could be anywhere, doing anything, and if you’re in public, you could still get caught up in some viral phenomenon. I feel like it’s a fear that everyone has. Any of us could have this happen to them, which is why a lot of people can relate to it.

SLUG: The album does a good job of enunciating those modern fears that the digital world brings us, which is comforting in a weird way.
EMA: It was slightly nerve-wracking to try and do that. I’m kind of a bridge between a Millennial and Gen X-er—I grew up without the idea of being online all the time but I was trying to make art that doesn’t ignore that the Internet exists. It doesn’t seem realistic to do that. It doesn’t make sense to not acknowledge this huge thing that affects so many people.

SLUG: This is going to reveal what a huge nerd I am, but I couldn’t help but notice the song titles of “Neuromancer” and “Cthulu.” Did the work of William Gibson and H.P. Lovecraft have any influence on the album?
EMA: Definitely William Gibson. I also like that Cthulhu is this huge, nameless beast, but it’s become a meme where people are dressing up their babies and dogs like him and taking pictures. Some people probably get turned off by the idea of a sci-fi influence, though.

SLUG: It worked for me. Reading about your song “Cthulu” was what led me to your album!
EMA: Great! We just need to take over the world with sci-fi nerds and things will be perfect.

SLUG: On the cover of The Future’s Void, your face is hidden behind an Oculus Rift device. How did Facebook’s acquisition of Oculus Rift relate to the meaning of the album?
EMA: The picture was taken long before the acquisition took place, but it just completed the meaning. Before, it kind of tied in to have this virtual reality device on the cover, but having Facebook buy a virtual reality device in order to distribute it to the public really completed the meaning. Things kind of came true—which isn’t that uncommon in sci-fi.

SLUG: Throughout the album, there’s a definite conflict between image and reality. How did you approach this conflict musically?
EMA: I think in some ways there’s a divide and collapse between the image and reality of things. If people perceive something—especially in this viral world—it quickly becomes reality. In other ways, we’re also becoming more skeptical. Every time we see something, we question it. Musically, I’ve tried to harness electronic instruments in human ways. The music is still crafted by hand, which preserves the intentions of the person who is recording it instead of making everything perfect with technology. It can be hard to do, because authenticity is so easily engineered. I tried to make something that deals with ideas that have been around in sci-fi without relying on sci-fi tropes too much. But it’s also confusing because all of the signifiers for past technology are getting re-appropriated so quickly. It used to be that if you wanted to simulate a 1960’s feel, you had to buy a Super 8 camera. Today, that can be replicated with a plugin. It’s hard to make something new that avoids the trappings of nostalgia. For example, the song “So Blonde” is an obvious reference to the grunge movement, but there are also some aspects of the song that acknowledge that nostalgia. When there is a sense of nostalgia on this record, it’s very upfront about it. The song references this myth of blonde grunge rockers, and anytime the reference is that obvious, I try to add another level lyrically—like a hyperlink to comment on it as well.

SLUG: After wrapping up the tour, what are your future plans?
EMA: Going on tour is a cool because it lets you interact with people. I’m interested in these suburban places that I don’t really have access to. I’m not interested in making art about New York or Portland, but I love to make art about all of these outer ring cities. Maybe Salt Lake will have some research for me—maybe I could get someone to take me to their parents’ basement and show me all of their old video game consoles while we eat different kinds of Doritos.

EMA’s album The Future’s Void is out now, and she’ll be performing at Kilby Court on June 24. For more information, check out her website, http://www.thefuturesvoid.net/.