With Das Energi just a few weeks away, we talked about what fans can anticipate, as well as some of my personal, burning questions involving what it takes to pull off such a big event. 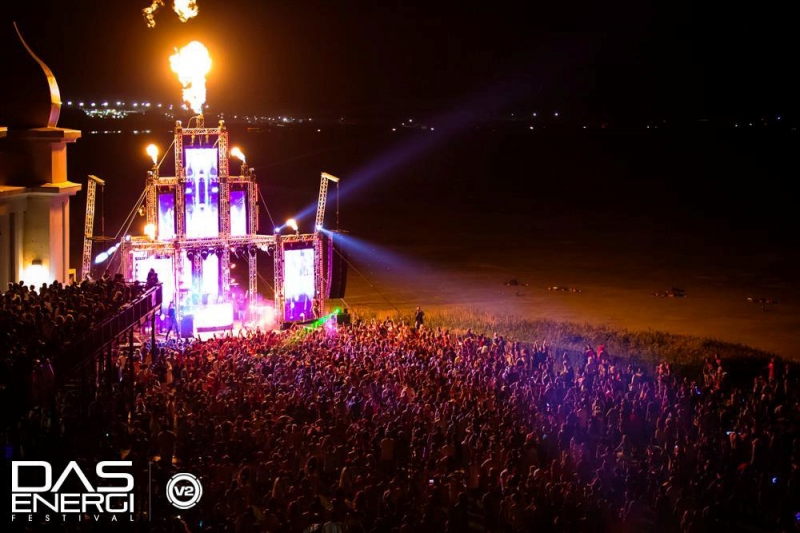 Das Energi at The Great Saltair hosts electronic acts from across the globe. Photo: Alex Perez

Thinking back to my first V2 event when I was still a wee high-school kid, excited that my favorite electronic artist at the time (Benny Benassi) was finally coming to my area, I remember being completely awestruck upon discovering the wild party there was to behold out at The Great Saltair. Though Utah may not be the mecca of EDM in the ways that Vegas and South Florida hold the treasure troves that are EDC and Ultra, I can still proudly tell my friends in other places that we have a pretty healthy electronic culture and are constantly being fed some of the hottest names around the world. Whether it be the partnership they had with Insomniac over Sundance, which brought in massive shows to Park City’s Epic Nightclub, or the hundreds of shows in a wide variety of genres around the city, there’s never a shortage of entertainment around here.

The company we have to thank for all of our memories sits in the heart of downtown Salt Lake above the Lo-Fi Café, where every junglist in the area can gather for some skanking every now and again for their drum and bass club nights. I arrived at the V2 office to find everyone hard at work before sitting down to talk with its founders Brandon Fullmer and Jeremy Moreland, the former of whom lists himself as simply a “window washer at V2” on his Facebook Page. Their upcoming shows, Das Energi and Get Freaky, promise to hold exciting, big steps for the company. While the Get Freaky lineup hasn’t been revealed yet, they’ve decided to extend the event to a two-day festival to celebrate its 10th anniversary. “Wait until you see the lineup—I get chills just thinking about it,” Fullmer tells me before we get started. With Das Energi just a few weeks away, we talked about what fans can anticipate, as well as some of my personal, burning questions involving what it takes to pull off such a big event.

SLUG: This year’s lineup is pretty awesome. What was your procedure in choosing the artists to headline?
Moreland: Essentially, last year, we did Hardwell, and it was more of a club and house crowd, and this year, we wanted to reach out and put a little more bass music in there. Bassnectar has always been a really good crossover. We’re trying to bring this more out of straight electronic music and into more of a festival rather than what would have been called a rave back in the day.

SLUG: Who is involved in deciding whom to book, and who has the final say?
Fullmer: Jeremy and myself, we decide who we want, and from there, we build offers.

SLUG: Do you look at who is releasing new things or touring at that time?
Moreland: Absolutely
Fullmer: We definitely want to look at artists [with things] coming up. If they do have a new album, they’re going to be playing the new music, and the interest builds up [with the fans].
Moreland: It’s also a lot of what we hear on social media; we look at who the fans are asking for. We’ll look at social media statistics and see how many fans they have in Utah versus New York City, for example. Obviously, if the artist is huge in New York but not here it won’t make a lot of sense for us to book them. We definitely like to build a lineup per what everyone wants to see.
Fullmer: We put up polls on our Facebook and ask who people want to see and take the numbers from there.

SLUG: I really appreciate that V2 incorporates local acts into their larger-scale shows and festivals as much as they can. What is your process in seeking local talents aside from online mix contests?
Moreland: We like to rotate them all through. We don’t like to use the same ones every time, but there are some of our guys that we manage locally, and they play a lot of them but we like to give everyone a chance to get through. That’s why we do these contests, to discover new talent. I mean if the DJ has only been playing for six months and is really new, we may not want to put them down yet, but we definitely like to discover new talent.
Fullmer: The way that we judge our contests is that you may have a good mix and you may have a lot of votes, but it may not fit what we’re trying to do with the show. It’s not a popularity contest. We always look at the top five, and go through that and determine from there.

SLUG: Would you say one style of electronic does better in Utah than others? For example: dubstep versus trance. If so, why do you think that is?
Moreland: I think it’s always changing. For instance, back in 2010, it was electro house, then in 2011/2012, it moved to dubstep, and I feel like Bassnectar is doing a lot of ticket sales right now, and his fanbase here is definitely growing. Essentially, we look at what’s really hot and who other festivals are booking.

SLUG: More specifically, I see Datsik on local lineups at least twice a year. Is that due to popular demand or just because he tours a lot?
Fullmer: Definitely popular demand. A lot of our patrons like Datsik and want to see him over and over. Some of those bigger bass artists and dubstep artists [are really popular].
Moreland: There’s just a solid fanbase for them here.

SLUG: With your monthly drum and bass show, is there a reason that you created a club night and don’t include much of the genre in your lineups?
Fullmer: At first, a lot of people were asking for one, and that’s why we did it, but it’s taken a long time to build up, so we’re not doing them every month. When we get a good act like our upcoming Artificial Intelligence show, we’ll put it up.
Moreland: Generally, we’ve seen the club scenes kind of hurting here. There were a lot of people doing a lot of things, and then everyone quit, so it’s hard to get the support from everyone.
Fullmer: It’s not necessarily that we never include it in our bigger shows. We have some drum and bass coming up at some festivals really soon.

SLUG: On the subject of the production, tell us a little bit about what you’re planning stage-wise for Das Energi.
Moreland: We have a different structure than we did last year. That will be in the same place, in the amphitheater. The inside stage will be going up again, and then we’re adding a third stage out on the beach and putting up art installations out there.

SLUG: A few years ago, you worked with Opulent Temple, a Burning Man sound camp, on the beach stage. Will it be the same people helping make that?
Moreland: No, it’s all us. We’ve got some people in Denver interested in coming out to do some art installations. It’s going to be a smaller stage but it will still be good size stage out there.

SLUG: Do you work with other Burning Man sound camps?
Moreland: Not for this festival, particularly, but we have discussed with other sound camps out there about potential partnerships in the future.

SLUG: Bassnectar usually has a really intricate visual show to go along with his music. What can attendees expect for this show?
Moreland: He’ll have his own production team, his own lighting designer, visual and sound guy.

SLUG: Are you bringing in any special sound systems to help accommodate his booming sound?
Moreland: We’re just beefing up our normal one.
Fullmer: We’ve added an additional 18 subs from last year. It will definitely be bigger than last year, even though it was pretty loud [to begin with]. Moreland: We’ve increased it about 30 percent.

SLUG: Do you have sound curfew when you’re so far from everything?
Moreland: Not technically, but the city likes us to end around 2 or 3 a.m., so we’re very adamant about listening to the judgment from the city and working with officials on it to make sure everyone is safe.

SLUG: With people like Madeon and Bingo Players, what can attendees expect from those sets as far as visuals and special effects?
Moreland: There will probably be a lot of cryo. Outside, the venue doesn’t allow confetti because it gets all over the beach and is too hard to clean up. There will be CO2 and pyro.
Fullmer: It is our largest lighting and effects production we’ve ever done.

Das Energi will be held Aug. 16 at The Great Saltair with a wide array of headlining acts from around the world. V2 will also be hosting a pre-party for the event on Aug. 7 at the Lo-Fi Café with local support starting at 9:30 p.m. Tickets and information for any upcoming shows can be found atV2presents.com, and to be the first to find out about the Get Freaky lineup, follow their Twitter and Facebook pages at facebook.com/v2presents or @v2presents.