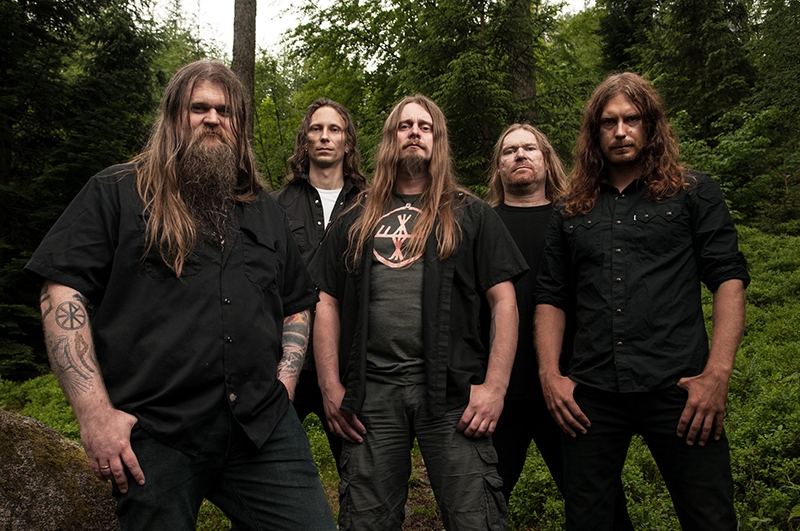 Enslaved: The Rites of Man

We all indulge in rituals. Some can be day to day—others might be subconscious. Regarding Norwegian metal stalwarts Enslaved’s latest album, RIITIIR, founding member, guitarist, vocalist and songwriter Ivar Bjørnson says, during an interview with SLUG, that the title is an “Enslaved-ified” derivative of the word “rite” or “ritual.” Join them in the ritual of a live concert when Enslaved play the Murray Theater on Feb. 12.
Over time, musical and lyrical concepts have changed for Enslaved. Discussing RIITIIR and its title track, the conversation focused on the current motivations of Enslaved in regard to working with the idea of “ritual.” “RIITIIR is more looking at the similarities between different cultures and people,” says Bjørnson. “Some songs are looking more at … the mechanics of rituals, especially looking at the Runes of Northern mythology, which is sort of our sphere, and some are more psychologically influenced.”
Bjørnson continued by explaining how ancient practices meld with modern sciences. For example, ideas that some would consider to be old actually resemble parts of modern psychotherapy, and some mystical traditions are used scientifically in astronomy. “That’s what we’re looking at, from a bit of a pseudo-anthropologist’s hobby point of view,” says Bjørnson. Lyrically, RIITIIR mentions older types of ritual fashions, speaking of “mud-dwellers” in the song “Thoughts Like Hammers,” or more modern ideas in “Materal,” which mentions Heuristic observers.
Enslaved began at the height of the Norwegian black metal scene, starting a death metal band called Phobia, who released one demo. Phobia dissolved, and Bjørnson and the other members shifted their focus. Bjørnson says, “[Enslaved felt] like a proper, serious band that we were having fun with quite rapidly … Not too long after at the end of ’92, we recorded our first official release,” a split album with Emperor, Hordanes Land, which is now almost considered essential black metal listening.
Early in their career, Enslaved focused on their heritage, the Northern mythology and studying the language of runes. Enslaved began with a black metal core, but avoided satanic lyrical themes, with early albums sung in Icelandic and old Norwegian languages—like the band’s first full-length, Vikingligr Veldi, released in 1994—until the band’s fifth full-length, Mardraum, which is sung in English. Enslaved, for the most part, avoid the negative connotations of bands and their members committing criminal acts, including murder and arson (church burning), with which the early Norwegian black metal scene is often associated. Their work matured and developed, as Bjørnson started Enslaved around 1991 when he was 13 years old.
“I guess, for us, it’s just been a natural direction that you go from sort of an externalized experience where you read about the history and geography, then you start having a sort of personal interaction,” Bjørnson says. “The exploration, for us, has gone inwards. It’s more personal, and the result from that is you feel more connected to global things and less of a specialized, nationalistic [Norwegian] heritage.”
Bjørnson talked about how the album’s focus is more to explore rather than provide any answers. The album’s lyrics are definitely open for interpretation—there is no specific culture, class or faith of people spoken about, just ideas. The song “Veilburner” says outright in its lyrics: “Finding the truth doesn’t mean there’s an answer …” The subject matter also addresses the past and the future as the same in some regard. Lyrically, and non-linearly, my interpretation is that, through a type of ritual, the first-person perspective of the song lyrics suggests a discovery of light through darkness.
In many ways, creating a musical album is a ritual, where artists follow similar paths they have tread before, but also take in new ideas. Bjørnson says, “[Enslaved’s] musical journey has been colored by both certain consistency and inconsistency. At the same time, we’ve let ourselves be diverse. If there has been something influencing us as music listeners or musicians, we like to study and go back and find the origins of certain sounds or trace back and glance through music history … If we end up sort of borrowing a riff here and there, that doesn’t embarrass us. I think that’s what music is, sort of this intricate web of influences and connections.” Sonically, RIITIIR ultimately blends both black metal and progressive sounds to form a sound of strong, dense, intense noise with intricately layered melodies.
I asked Bjørnson what he was most proud of about Enslaved, and he responded saying, “It’s totally impossible just to pick one thing. It’s just being at the point we are—I guess that we’ve created our own sound. We’re definitely a band people can put on the stereo and identify that it’s Enslaved,” he says.
The band plans on getting the most out of their time slot by giving fans a mix of old material and new. See Enslaved play Salt Lake for the first time on Feb. 12 at the Murray Theater with Amon Amarth and Skeletonwitch.
Photos: