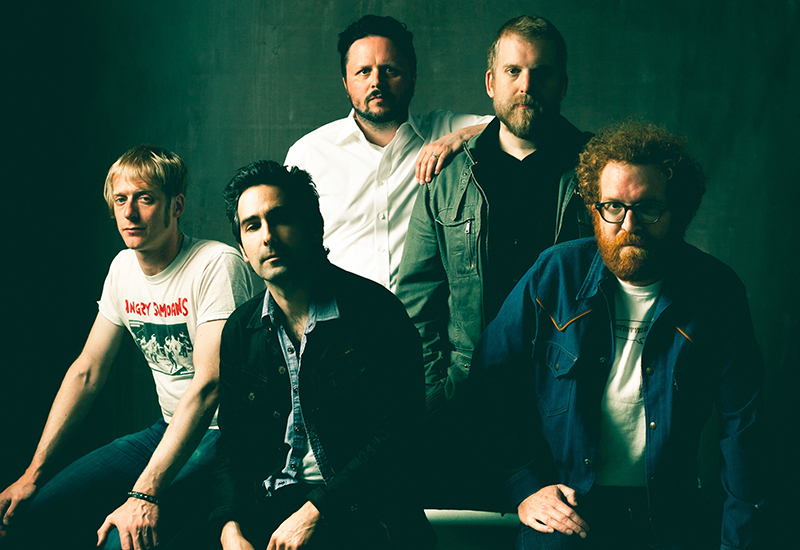 I can tell what questions Eric Earley, lead singer-songwriter of the alt-country outfit Blitzen Trapper, has been asked at least three or four times in previous interviews. He responds with well-mannered, polite answers to my questions about Blitzen Trapper’s current North American tour. “It’s going great,” he says. “It’s going really well.” I know that if I attempt to hit this man with a series of manufactured inquiries about Blitzen Trapper, he’ll mirror my questions with equally polite, generic answers. This man is smart enough to know when a writer is bullshitting him, although his soft-spoken, confident demeanor restricts him from responding with any type of arrogance or self-entitlement.

After a few casual questions, I sense that Earley isn’t interested in discussing being pigeonholed into music genres. “People need labels because they need something to wrap their heads around,” he says. Blitzen Trapper’s most recent album, All Across This Land, is a straightforward kick-in-the-teeth album with a generous portion of slide guitars, country influences and songs lush with the American storytelling that has set Blitzen Trapper apart from other alt-country bands attempting to do similar things. “ I think that labeling us as an Americana band is pretty accurate,” he says. “In my opinion, our music is pretty textbook Americana.” He briefly mentions Raymond Carver’s What We Talk About When We Talk About Love as a major influence, but he quickly stops himself short. It’s an odd, almost mysterious move that reveals more about who Earley is than any question I could have asked. “Raymond Carver has a very specific thing he does—he’s dark, and he spans a lot of time,” he says. Earley could have easily been describing his own music with this statement, and perhaps it is this self-reflective sentiment that causes him to change the direction of the conversation.

Yet, as dark as the storytelling of Blitzen Trapper might be, it is as equally infused with undeniably religious undertones. It begs the question of whether these influences are simply an inherent part of being an “Americana” band or if Earley has a much deeper connection to religion. “I grew up in different churches,” he says. “I went to a Christian preparatory in Georgia for a year after high school. I think my main reason was because it was 3,000 miles from home,” he says. He pauses for a moment before continuing, “In the town where I grew up, there was a small group of people playing music. I met people at youth group, and once you met a few of them, you got kind of got everybody to play.”

These early influences would perhaps set the stage for future events to come, particularly a stint in which Earley voluntarily chose to be homeless for two years in Portland. Camping out in an abandoned building with a dilapidated roof that was collapsing across from the room he stayed in, Earley describes the experience. “Parts of the building would flood, and people would move their gear out into other areas,” he says. “That’s where we got the piano we used on the album Furr. The piano was left out in the hallway, and the ceiling had caved in and was going to ruin it, so we grabbed it and pulled it into my room—and we used it to record.”

I’m curious about whether or not this was a subconsciously inspired religious move, although Earley explains his true motives: “I was just kind of doing whatever seemed right and what made the most sense at the time—but it was a different time back then,” he says. “Portland was a much different place then.” He goes quiet again, mirroring the same sentiment that he displayed when discussing Raymond Carver. It’s one of those moments of complete stillness that simultaneously peels back the layers of this complicated man—layers that must inherently go deeper than the simple labels of “Americana” and “Christian.”

I ask him what he’d do, musically, if he had the means. He pauses, thinking for a moment. “I remember My Morning Jacket, and I remember seeing their stage show,” he says. “They have all this space, and a grand piano. I would love to have that kind of resource to do that kind of show, but we have to be playing for a certain amount of people to be able to pay for that kind of venue and crew. In order to do the really big stuff, you have to be playing for a thousand people every night, or more.”

It’s not an impossible goal, given how Blitzen Trapper’s popularity has exploded within the past couple of years, particularly due to several mentions in Rolling Stone Magazine (which recognized the band in 2007 and provided it with some much-needed publicity). Since then, Blitzen Trapper have been impossible to ignore. Yet, the band has retained a hard work ethic and sense of humility that has served them well throughout the years, and has remained dedicated to its fanbase throughout the entire process. “The thing I care most about is our live show and making it better. I’d love to have the budget and space to make our live shows better for the fans,” Earley says.

It’s another revealing statement, although it’s not surprising. The quietly confident demeanor of Earley is an unmistakable echo that inherently finds itself embedded within the music of Blitzen Trapper: music that is poignant, humbly layered and nostalgic with the rich history of our country. He laughs one more time before our interview ends and tacks on an afterthought regarding his Christian roots. “I try to stay away from all that weird, Christian conservative stuff,” he says. “I don’t go into the political realm. It just doesn’t seem right to me.” He finishes his thought process with that familiar silence. It is a tactfully framed statement that rests peacefully within the smart, soulful character of this man.

Blitzen Trapper will perform at The State Room on Oct. 27. For more information about the band, visit here.