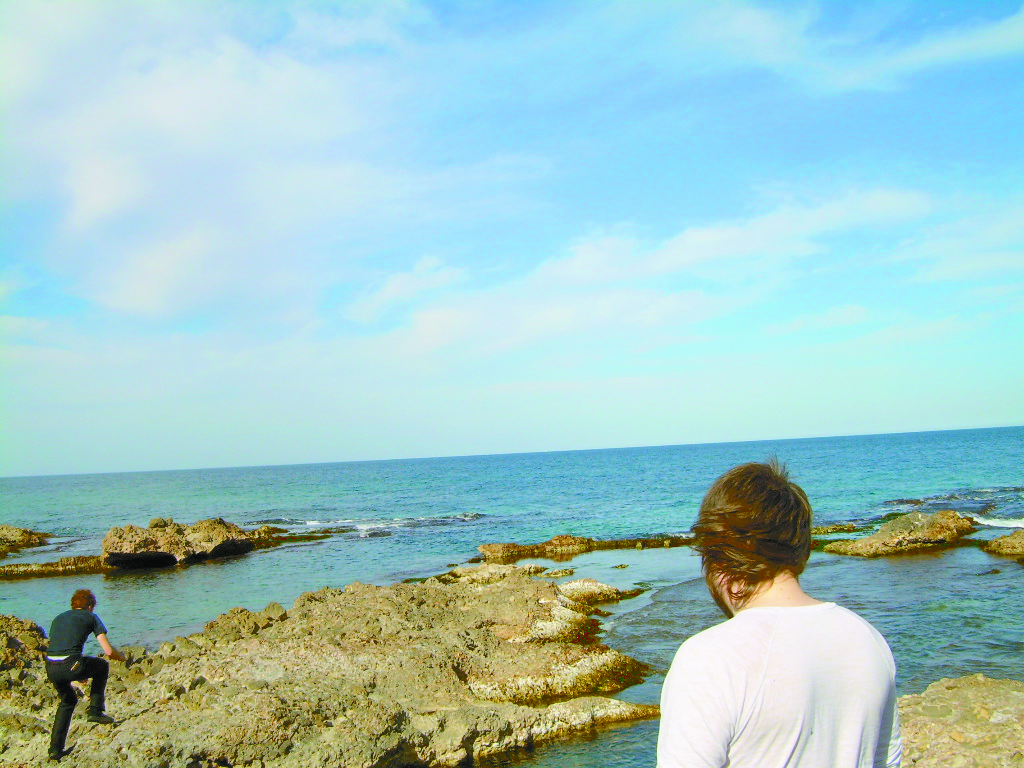 Eighteen hours seemed like years as we touched down in Frankfurt, Germany. It was now February 2, and the members of Uzi and Ari were officially committed for the next six weeks to face extreme uncertainty in a very strange land. We were jet-lagged, dizzy and without a clue what this tour was going to be like. Our record label Own Records is painfully small; our album being only the 7th proper release, and we had no expectations as we loaded up our Mercedes Sprinter van. The press seemed positive, but who knows if that would translate to people actually giving a shit. We had toured in the states before, with what seems now to be a very luke-warm reception. Now we were in a place that we had only heard about through TV and magazines. We played 39 shows total; here are the events of three of them. We have played our first two shows and they have gone off without a hitch. Our first show was an enormous party; about 500 people showed up to dance awkwardly and listen to music. We played in one of the smaller rooms which held about 150 people. They cheered very loudly and forced us to play an encore. It was very exciting to be in an environment so welcoming to us. Afterwards we danced the night away in one of the larger rooms while trying to socialize. The language barrier was not as problematic as you would thing as most Germans speak English very well. It is somewhat disconcerting to realize that out of all four of us, only Ben speaks another language in addition English. The party went until 5:30 am; we slept for a few hours in a room full of mattresses about the venue and then headed to our next venue in Offenbach.

The cities have history oozing out of their walls; you can almost see what parts of the city were ravaged during World War II and then rebuilt. Blake and I went for an early morning walk and there is a distinct sense that these memories of war have not yet fallen out of the German’s minds. You can see the slow death of religion; the cathedrals are black from age, and there is a lack of desire to build new ones or to keep up the old ones. Religion here is completely different than in the states. People are finding that they are more interested in connecting with other humans rather than trying to connect to a god that seems indifferent. Their religion is one of community.

Sergej was bleeding profusely from his newly acquired head wound. He can’t remember how he got it, but it doesn’t matter because he is both drunk and high, flailing his arms in the air to the ungodly loud dance music blasting through the club named Mobilat. The day had started simple enough; a five hour drive from Antwerp, Belgium to the lesser known Heilbron, Germany. The club looked like any other at first but would soon be transformed into a Mongolian paradise, complete with cardboard yaks and gold flowing ribbon hanging from the ceiling. We were participating in the celebration of an art opening for a nearby gallery which was showing photography from Mongolia as well as a skateboarding video produced last summer. Of course it wouldn’t have been truly Mongolian if we wouldn’t have had a throat singer open for us. He was very talented as he bowed and plucked various instruments while singing in various registers and tones. Sometimes he would whistle and sing, and the Germans loved what they heard. Next we played to the very loud cheers of the packed bar, they were truly grateful to be listening to our music. After we played, the dance music started and the clubs owner Sergej came bleeding into the crowd. The alcohol was available almost insufferably so, and people were busy groping and grinding their way to ecstasy. We danced all night, and the music finally started slowing down at 4:00 am. We loaded our stuff and noticed that there were several guitar pedals missing, amounting to nearly $400. A pretty severe way to end a night, but it didn’t matter because we were paid well by the club and sold a sufficient amount of merchandise. We were staying at Sergej’s apartment, and on the way to his house he passed out before he could tell us where he lived. We shook him and shook him until he blurted out an address. We then used GPS to locate his apartment and helped him stumble inside. As I laid on the small mattress on the ground, I wondered why I couldn’t sleep. Was it is the excitement of the evening? Then I realized that I couldn’t sleep because there were rats in the room and they were mating or doing some other type of loud activity. Finally asleep at 6:00, and then up at 10:00. We had a seven hour drive to Luxembourg.

We drove out of the shadows of Germany into the bright light of Luxembourg. The sun never poked its head out the entire time we were in that heaviest of heavy countries. It is very fitting that my eyes are not quite yet used to the sun. We passed rolling green hills that hide small villages, untouched by modernism. Our record label is based in Luxembourg City, and our arrival is almost that of royalty it seems. There is sure to be a grand ball tonight.

There were literally 3000 people there, possibly more. We were in the land of champagne, and they were sure to keep us well stocked. We were opening for a well known band called The Servant from England. Apparently they have quite the following, and we were happy to steal as many people away from them as we could. The entrance fee for the show was 25 euro, equivalent to about $35. We walked on stage to enormous applause even though most of the people didn’t know who we were. It became apparent that we were playing for a very young crowd made of mostly 13-18 year old girls. The rest of crowd was much older, even up in their 40s. Americans in their 40s never go to concerts; it was almost uncomfortable to talk the middle aged frogs who acted like they were still in their 20s. We played and the crowd cheered, then we went off stage and came back and they cheered some more. It was strange to look into their eyes and wave and have them react so vociferously. We waited in our modern dressing room with strange shaped couches and huge cosmetic mirror. After The Servant finished playing we went to our merch booth and were literally mobbed by the young bright faced kids. We were lucky to have a table separating us. We signed autograph after autograph and sold at least eight times as much merchandise as they did. There were lots of photos, and lots of kisses. We felt as if we had fooled someone to experience this, nonetheless we were happy to experience it and even happier to make some money in the process.

In the end, the tour seemed madly successful in our eyes. Thousands of people got to hear us play, and the whole time we felt out of place and felt as though we had tricked someone into letting us play this role for a little while. It will be hard to forget the van hook ups, waking up in vomit, watching porn with Catherine, the long and excruciatingly boring van rides, the Spanish beaches, the women of Zaragoza, the late night dance parties, the expensive French toll roads, all the bread and cheese consumed, waking up in a different bed every day and a different country every few days, and of course, the overriding feeling of awe that we were so blessed with such an experience.