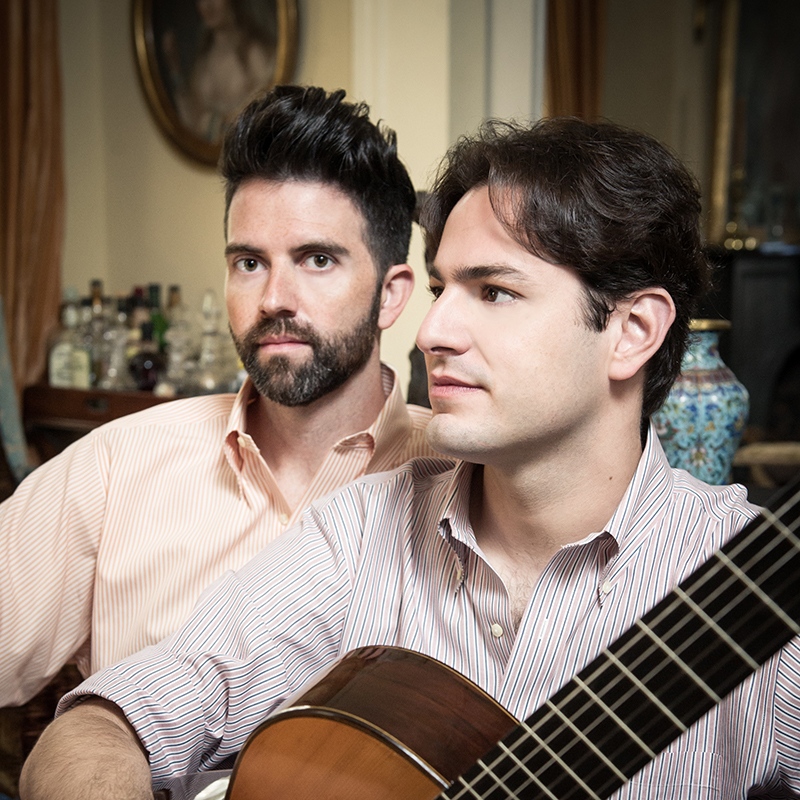 An Evening in Brazil: Dustin Gledhill and Lucas Pullin

For one night, the sounds, sights and flavors of Brazil will feel a little closer to home with Taste of Brazil, a program featuring the music of 20th-century Brazilian composer Heitor Villa-Lobos and featuring brigadeiros (a Brazilian chocolate confection courtesy of The Mighty Baker), caipirinhas (made with cachaça, a Brazilian variant of rum) and dancing. Husbands and Julliard Performance Conservatory graduates Dustin Gledhill on piano (of Hive Riot fame) and Lucas Pullin on guitar will perform pieces from Villa-Lobos as well as other composers from both Brazil and Europe. The concert will be held at The Forge Collective on Aug. 6 at 7:30 p.m.

Gledhill and Pullin premiered “Taste of Brazil” at the end of last year to a sold-out crowd in New Orleans, an immersive experience that Gledhill predicts will indulge the audience in more than just classical music. “It was a great concert to get the audience involved a little bit and also bring in some local, Brazilian culture,” says Gledhill. “I thought that it would be a cool thing to kind of take on the road and do the same thing in other cities and try to find local Brazilian restaurants, some dancers and pick from the community a bit.” Finding the bits of Brazilian culture unique to each city in which they perform “Taste of Brazil,” Gledhill and Pullin plan on performing a similar program in New York City later this year.

The program is heavily focused on the life and works of Villa-Lobos as part of a greater narrative about Brazilian music and history. A composer from the early 20th century, Villa-Lobos was a multi-instrumental musician who got his start working with street musicians in Rio de Janiero. Once he had achieved notoriety as a musician, he traveled back and forth to Paris, and the works that came after his time there were shaped by his experience. Specifically, Gledhill and Pullin will perform two of Villa-Lobos’ chôros: the first chôro is a guitar piece heavily steeped in Brazilian rhythm, while the fifth chôro, a piano piece, shows off Villa-Lobos’ style after spending time at the Paris Conservatory, influenced more by romantic and modern classical musicians of the time. “Villa-Lobos was kinda tricky because you kind of have to know a little bit of background in Brazilian rhythms and some of the traditional songs to be able to feel it and get the music. It has a Latin influence in rhythms, but at the same time, its European as well,” says Gledhill.

The chôros that Gledhill and Pullin will perform have an almost improvisational sound, a hint of jazz that comes through in Villa-Lobos’ work. In addition to the musical performance, there will be a dance portion to the evening: The chôros will feature an improvisational dance piece, and attendees will have the option to participate in a short lesson in the Brazilian dance form Maxixe, which Pullin describes as a mix of a polka-influenced dance with some African rhythms mixed in. “We’re incorporating treats, and why not incorporate another form of art as well?” he says. “We’re trying to make something dynamic that will involve the audience into it. I think the dance represents Brazilian music so well that it is kind of hard to do [the performance] without it.”

For Pullin, Villa-Lobos was an obvious choice to represent his home country. “I’m Brazilian, and [Villa-Lobos] wrote for the guitar quite significantly,” he says. “He is not only responsible for bringing modern music into Brazilian music but into the guitar world in general.” Picking up guitar as a 13-year-old, Pullin says that he naturally had an inclination toward Villa-Lobos’ music after a teacher introduced him to Villa-Lobos’ First Prelude. “Playing Villa-Lobos’ music has been very natural to me ever since then,” he says. Ultimately, Villa-Lobos’ music represents authentic Brazilian rhythm married with a European influence, a flavor that is uniquely emblematic of Brazilian culture.

As far as what one can expect from “Taste of Brazil,” Gledhill and Pullin hope to offer an interactive and dynamic view of Brazilian culture. “I think that ‘diversity’ is the word that can describe a lot of Brazil,” says Pullin. Gledhill, who has been to Brazil twice, hopes to paint a picture of the impression he has of Brazil. “One of the things I appreciate so much about Brazil is the culture and the oneness of the people there. Everything is colorful, so many parts of the country are gorgeous,” he says. “It’s a new musical flavor for me as well.”

Tickets for “Taste of Brazil” can be found here and are $13 for admission and $20 for admission with drinks. The performance will be held on Aug. 6 at the Forge Collective, located at 50 East and 500 North in Provo at 7:30 p.m.