SLUG Mag Soundwaves
Episode #403 – Mykah
00:00 / 21:59
Spotify Stitcher
RSS Feed
Share
Link
Embed
Unbeknownst to many, a small faction has been assembling for the past few weeks to revive an entity that has long been considered dead. Their inconspicuous plan to unleash their diabolical, reanimated creature on humanity is almost complete. That is, if you consider post-hardcore-influenced metal-punk diabolical. I’m not talking about some cult from a splatter film, but, rather, Salt Lake’s Pleasure Thieves: a punk-based four-piece coming off an extended hiatus. 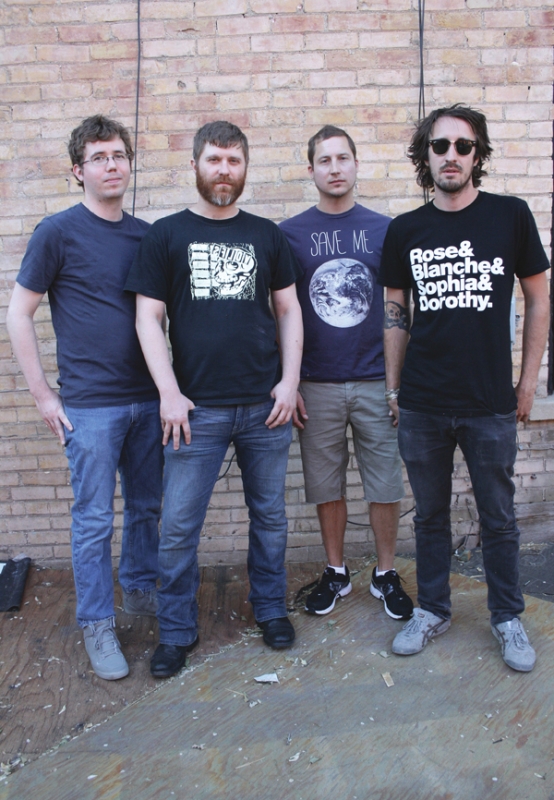 Unbeknownst to many, a small faction has been assembling for the past few weeks to revive an entity that has long been considered dead. After inducting Lance Saunders among their fold, they’re almost complete with their inconspicuous plan to unleash their diabolical, reanimated creature on humanity. That is, if you consider post-hardcore-influenced metal-punk diabolical.

I’m not talking about some cult from a splatter film, but, rather, Salt Lake’s Pleasure Thieves: a punk-based four-piece coming off an extended hiatus. The lineup consists of founder Dave Combs (vocals), Doug Grose (keys), Mike Sartain (drums) and their new bassist, Lance Saunders.  Pleasure Thieves spared 20 minutes before their practice at Kilby Court to help shine a light on their current anonymity and their upcoming (and first) LP release, The Empire Never Ended, out July 28 on Kilby Records.

Pleasure Thieves have been a narrowly known skeleton in the cupboard since the band’s inception in 2005. This is perplexing, considering the act is full of local music’s movers and shakers. No one knew exactly how they came about. Combs shrugged before explaining that the band was formed due to one of the most unpredictable states of human emotion: boredom. “Bands I was in before broke up,” says Combs. “Doug and I started Pleasure Thieves due to lack of anything else to do.” Combs’ band résumé is quite lofty: Homesick, Downers, The Ritalin Kids and The Corleones. His fellow members are equal heavyweights in the music scene: Sartain previously pioneered his own solo project and fronted Starmy; Grose originally played with Combs in Downers; and Lance is infamous from Deadbeats, The Fucktards and also being Kilby Court’s ringleader. “Dave and I already played together and [had] known each other for a couple of years,” says Grose. “When other things just stopped happening, we took Dave’s songs and decided to flesh them out.”

Pleasure Thieves’ initial mainspring was to prevent idle hands. “Pretty naturally, we just got people to start playing those songs with us. That was the first original incarnation of the band.” says Combs. However, the band eventually lost its curing effect, signified by its disbanding in 2010. “I just got sick of doing it for a while. I needed time to recharge my batteries. I think all of us have gone through similar phases where we take a step back and examine why we keep doing what we do with all of our effort … We wondered ‘What would it be like to not do that? It sounds pretty nice,’” says Combs.

Absence makes the heart fonder, but the expression wasn’t fully palpable until earlier this year, when the hiatus reached its tail end and Saunders got on board. Not only did he replace Dave Durrant as the bassist, but simultaneously became the band’s liberator. “Lance convinced me that he could be the bassist, but he didn’t play bass at the time,” says Combs. “So I told him if he could play the songs, then I’d get the band back together. Lance practiced his ass off and was able to play all of the songs [in about six months].”

A short while after the recruitment, Pleasure Thieves manifested the fruit of their labors: the band’s first LP, The Empire Never Ended. The album features a statuesque Roman emperor extending his finger in a dictatorial gesture, created by local artist Travis Bone. “We just gave him a record and said, ‘Just do what you want.’ Then he wanted to talk to me for 10 to 15 minutes, [to go] over the lyrical themes,” says Combs. “For me, it means, ‘What is the nature of empire—the nature of power and corruption,’ the things you think of when you think of the decline of Rome. The super gnarly shit going on in this country right now is similar to Rome’s height before the fall. Lyrically, that’s where I’m coming from, so Travis decided, ‘Well, fuck it, let’s go ahead and make it about Rome.’ That’s where the album title came from. It all tied together in the end.”

Combs’ disposition regarding his musical endeavors is a distinguishing trait, which sets him apart from many contemporary musicians.  Whereas most would use a window of publicity to promote themselves and usher out a few humble-brags, Combs just declares he’s glad to write music with his friends while keeping expectations to a minimum on the band’s lifespan. “This band can be broken up 20 minutes into our show,” says Combs. “That sounds terrible, but fuck it—I’m old. I want to make more records, but I know I can’t do it by myself—even though we all have things going on.”

Combs’ mindset concerning Pleasure Thieves is one that reflects their music itself: down-to-earth, real and thrashy post-hardcore/punk with no bullshit involved. Their aim isn’t to please you—it’s to keep themselves entertained. Pleasure Thieves possibly know better than anybody else that Rome wasn’t built in a day, but it could’ve fallen in one. Be sure to show up to their album launch show (and receive a free copy of The Empire Never Ended) with Nautical Sons and Light Black at Urban Lounge on July 28.