Fitz And The Tantrums: Life on the Road and the Road to Success 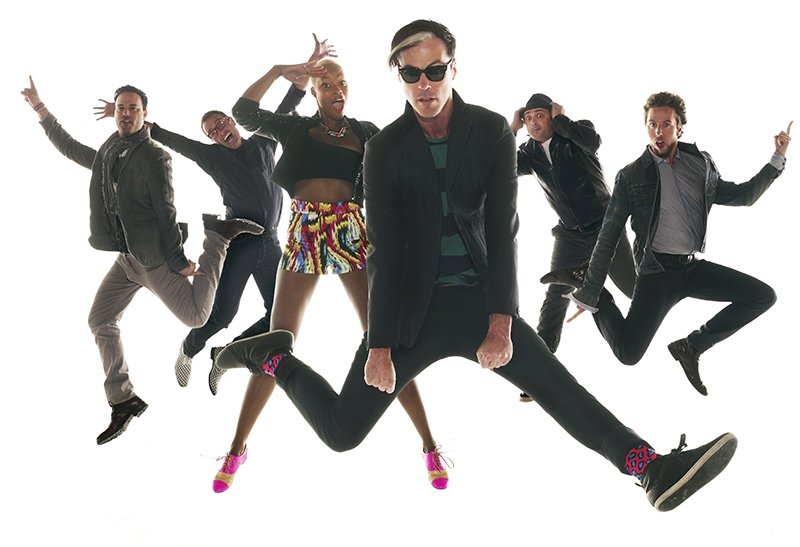 “We didn’t want to get stuck playing the Motown sound. It was a very conscious decision to distance ourselves from that.” Photo courtesy of BBGun Press.

Fitz and The Tantrums are widely known for their catchy tunes, writing chart-topping songs that stick in your head for hours. While six neo-soul indie-poppers might have your head in the clouds listening to “The Walker,” they’ve got their feet planted firmly on the ground. They welcome change and innovation, taking chances and staying humble in their successes. I had the lovely opportunity to speak with John Wicks (drummer and electronics), who shared some of his perspective about life on the road and the road to success.

SLUG: What changes did you want to make after Pickin’ Up The Pieces, going into More Than Just A Dream?
Fitz and The Tantrums: We didn’t want to get stuck playing the Motown sound. It was a very conscious decision to distance ourselves from that. The only reason was that we didn’t want to get pigeon-holed and have a shelved life with that sort of sound. At the time, there were other groups in that realm who were successful, like Adele, [and another] real blue-collar, hard-working band like Sharon Jones & the Dap-Kings. There were several [bands] out there, we didn’t want to get continually lumped in that—we wanted to branch out.
Also [we wanted to] cross over into the pop realm and garner more fans. The idea going into the studio was that there was nothing off the table sonically. We could never say, “We can’t do that because it doesn’t sound like us, or the first record.” Everything was allowed, except for saying that.

SLUG: How have your fans responded to your new album?
Fitz and The Tantrums: The fan base has multiplied by one hundred since the first record. The shows have gotten so much bigger! And, we’ve had two number one alternative hits off the new record. It was a scary leap of faith doing it, we had a working formula down—that retro Motown—so for us to say, “We’re going to leave that back there,” was scary, but it paid off in the end.

SLUG: You’re currently signed with Elektra Records. How has that impacted the band? What’s that been like?
Fitz and The Tantrums: That was another scary thing. We were on an independent record for that first record. So, going from an indie to a major label, (we’re all seasoned musicians in this, none of us are kids, and we’ve all heard the horror stories about signing with a major label) we all had our reservations, but we knew [that] if we wanted to get to that next level of exposure and spread the sound, we needed to do it. Thankfully, it’s been a huge win/win for us. I don’t know if all major labels are like this, but they’ve gone so far as to let us be involved in cover art for the record. It seems like you’re still dealing with an indie record, but you’ve got 50 people working for your promotion instead of just one. It’s really been great. Some of us have a certain degree of ‘punk rock guilt’—where you sign with a major label and you’re not longer legit … but I’ve come to realize that that was not really the case.

SLUG: How have you changed personally and as a band from day one until now?
Fitz and The Tantrums: Personally, my role as drummer has changed because I incorporate drum machines, layering electronic stuff, synthesizers and that kind of thing as opposed to just playing the drums. For me, there was a little bit of a learning curve. It’s a little constraining dealing with that, because you’re no longer crazy drummer guy. You’re electronics, and many more things could go wrong opposed to just dropping a stick.
As far as being a band goes, it’s trying to deal with having two families. I have my family at home, but I see my band family more than I see my real family. So [the change has been] just dealing with that emotional tug of war [and] trying to figure out how to deal with each other as business partners, [and] as a person you see first thing when you wake up and last thing before you go to bed, and to have those deep friendships and trust when you’re in such close quarters with these people. [It’s important to] remember that at the core of everything, this job is meant to be fun.

SLUG: How’s the tour going so far? How long are you on the road?
Fitz and The Tantrums: It never ends! I’m not being a smartass—it really doesn’t end. I think the longest break we’ve had in three years has been just under a month. I’m not the only dad in the group, Fitz (Michael Fitzpatrick, lead vocalist) just had a baby, and Joe Karnes [bassist] has a two-year old. Now that Fitz has a baby, he’s a little more sympathetic to what’s required of fathers. Our touring schedule now is three weeks on, one week off, three weeks on, one week off. Seems to work, but there’s not an end in sight.

SLUG: You’re playing a lot of shows all around the country—how do you maintain your energy to perform?
Fitz and The Tantrums: It’s tough. Not only is [performing] so high energy, but we’re also sleep deprived from being on a bus. You really feel how tired you are on your day off. But, I have the easiest gig. I can’t complain. I work for one and a half to two hours a day, playing a really high energy show from beginning to end, putting out the most sweat and burning the most calories. I don’t do well with down time. It can be exhausting just living with your own thoughts, and figuring out how to fill those other 22 hours. As soon as you step on stage, clubs and theaters are packed, and most shows are sold out, it’s really not hard to find the energy to do it—the adrenaline starts to go. We’ve always had the mentality to give [the audience] what they paid for.

SLUG: You’ve received critical acclaim for your full-length albums and E.P.s, but also for your reputation to kill it during live performances. You’ve been on Jimmy Kimmel, Jimmy Fallon, the Late Show with Jay Leno, Conan, etc. Where does the chemistry come from?
Fitz and The Tantrums: We sort of dug our own grave with that. We’ve played these high energy shows from the get go, and it’s become expected of us. Also, to be honest, nowadays the only way you’re making a living as a musician is by a good live show—no one’s buying records anymore. [Our] business model [goes] back to what musicians did before album sales were paying the bills. We’ve just got the mentality to get on the bus, or van and go and play shows and garner [our] audience and that’s kinda how bands have to do it now.

SLUG: You’ve also been featured in everything from Mike Mo’s skate video to Criminal Minds, Desperate Housewives, Oscar trailers with Ellen, etc. Did you expect to blow up so quickly?
Fitz and The Tantrums: It was definitely a goal, I wouldn’t say it was expected. It’s been pleasant. We sort of continued with this record with the song writing formula that we had on the first record. Sonically, it’s completely different, but we still write catchy songs. A lot of times those are the types of songs that get put into commercials and movies. It’s attributed to Fitz. Before he was in a band he wrote commercial music. When you do music for commercials you become a master of that hook—that part you can’t get out of your head: the whistling part on “The Walker.” We are blessed with that.

SLUG: Here at SLUG, a lot of us are chasing dreams to be writers, musicians, and artists—what advice do you have for the SLUGGERS trying to make it?
Fitz and The Tantrums: It’s advice that I’ve sort of just realized myself. I acquaint a lot of the art forms: writing, music and dance, everything. They all have common threads that run through them—there are no surefire ways to success, or whatever you deem as success. I started playing drums in third grade, and realized I wanted to be a drummer my senior year of high school—I made that decision and never looked back.
The first thing you have to do is ask yourself, “Could I do anything else?” and if the answer is, “Yeah,” then you should do whatever else you can, because you’re not going to have the energy to continue to do it.
The second thing is: if you decide you’re going to be a writer or musician, then live minimally. You will achieve your degree of success that you’re looking for financially— you’re going to get there a lot more quickly if you stop buying things. Always ask the question, “Does this item add value to my life?” I wasted so much money on things that were completely unnecessary. I think I could have gotten to the [financial] comfort level I have now that I’m in a successful band even when I was just playing gigs for $50 in dive bars—I think it’s the same for writers: you can get to that point more quickly if you live minimally and don’t waste your money on things that don’t add value to your life. Just be really honest with yourself.