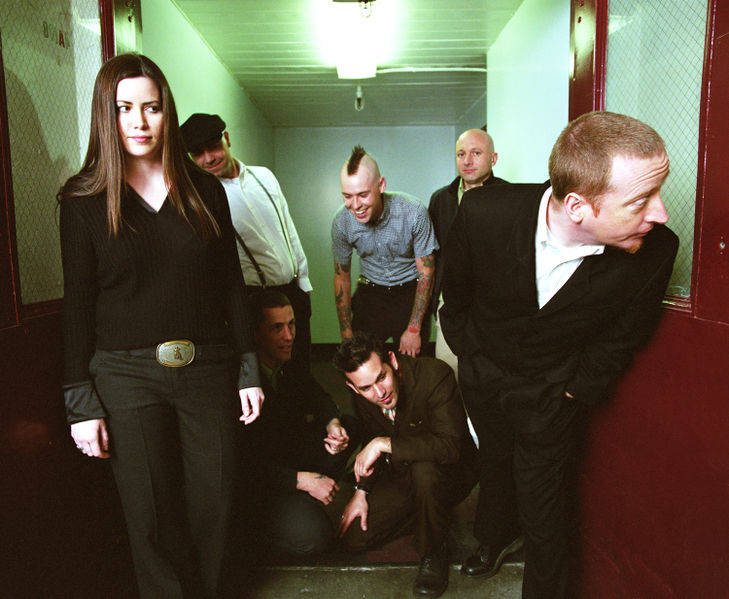 I was assigned to interview members of Flogging Molly. I was looking forward to it; particularly the part about talking to Matt Hensley, the accordion player. I’ve hung out with him before and he’s always been a real nice guy. For those who may be unaware, he also was a skateboarding legend. In the early 90s, he rode for H Street and was in the video Shackle Me Not. This would make the interview a lot easier.

[Flogging Molly]The difficult thing would be waking up at 9:30 in the fucking morning. I’ll let you readers know something, I drink like a goddamned fish and 9:30a.m. is usually when I’m passing out. Well, obviously, through some sort of miracle, I got up in time to do the interview. Except Matt wasn’t there. Dave King, the lead singer, was, however. He had just woken up too; this was also, as he described, hard, because he also had had a “long night.” I already liked the man. I know from previous meetings that they have a trailer behind their bus that is literally full of Guinness of which, let’s just say, they aren’t scared to take a sip or two of.

Flogging Molly are currently on tour supporting their new album, Within a Mile of Home. Unfortunately, they won’t be coming through Utah on this tour, but they hope to be soon. Dave said he really loved the fans out here that came out and rocked out to their set during the Warped Tour this summer and then drowned in the stupid torrential rain that occurred almost immediately aftewards.

Dave misses his hometown, Dublin. He hasn’t been back there in many years. H e said that the album title had a lot to do with that, but sometimes, after you’ve been gone so long, you forget where your real home is. He said that home isn’t necessarily a physical place; it can also mean happiness. We discussed drinking and Ybor City, a bar district in Tampa, Fla., where the streets are paved with vomit. It turns out that we have a mutual friend, Seamus, who owns the James Joyce Irish Pub there. Dave said he was a crazy bastard and a generous man.

He was surprised to find out that the first single is actually getting radio play. I asked him if Paddy Maloney and THE CHIEFTAINS were an influence on the songwriting on the new album. He said that no one had ever asked him that before, but yes. The biggest influence was his personal life, he says: He was depressed and having a bit of a rough time. Coming from an Irish Catholic back ground, Dave said he sometimes feels guilty for being too happy. Dude, is that some heavy shit or what?

You can find out a little bit more about the band on their website at www.floggingmolly.com, and be sure to check out the video for the song “Drunken Lullaby;” in the extras section, it’s got my friend Patrick Melcher skating in it. Dave and I then talked about what he’s listening to in his car at the moment (Tom Waits) and about how I got arrested the other day (fuck you very much, Officer J. Adamson). I told him to pass along an apology to Matt for me because during the Warped Tour, when we were drinking backstage, my drunk friend Brad kept repeatedly trying to force him, ad nauseam, to take whiskey shots against his will. Dave would like all of you fans and readers to know that he appreciates all of you very much. There, I did it, a whole article about Flogging Molly and I didn’t mention The Pogues once. Slainte!