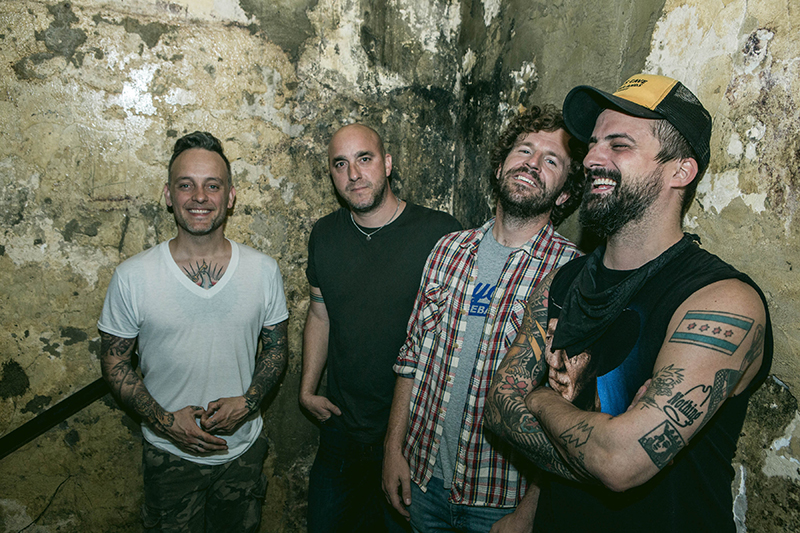 Flying High with The Falcon

In September 2006, Chicago punk rock supergroup The Falcon released their first full-length album, Unicornography. Featuring Brendan Kelly and Neil Hennessy of The Lawrence Arms and Dan Andriano of Alkaline Trio, it was a sometimes goofy, sometimes dark, always energetic album that united internet punks the world over. In the decade since, Kelly has stayed busy with his Wandering Birds project as well as a new Lawrence Arms album with Hennessy, and Andriano has released a few more albums with Alkaline Trio and two solo albums. Last year, for the 10th anniversary of Red Scare Industries (a record label founded by Kelly and Tobias Jeg to release The Falcon’s music and which has since released music from Teenage Bottlerocket, The Menzingers and more), The Falcon recruited guitarist Dave Hause of The Loved Ones and reunited for a special performance. So magical was that night that the band decided to keep the momentum going, officially reuniting and recording a new album, Gather Up the Chaps, which was released in March of 2016. Older and wiser (yet still writing songs with titles such as “Hasselhoff Cheeseburger” and “You Dumb Dildos”), the band’s newest release refines the reckless abandon of the band’s earlier work into equally energetic but darker territory. For the first time ever, The Falcon are embarking on a tour with all of the band’s members, and will be stopping at Kilby Court July 9—Kelly assured me that SLC is one of his favorite places to play because the crowds are always “so good lookin.’”

SLUG: One thing that I think is really cool, not only in The Falcon but with your other projects, is how your voice has changed—both the actual voice that comes out of your mouth and your songwriting style. What brought about your newer singing style, and how do you think your approach to songwriting has changed over the past 10 years?

Brendan Kelly: Well, there’s a few things. I’ve always dabbled in singing in a bit more of a clean style, but I never really had the confidence to do it very much. When I put out the Wandering Birds record, I really didn’t want it to sound like everything else I’ve done. My voice is so distinctive—I mean crappy, but crappy in a distinctive way. After singing the same way for so long though, it became kind of grating. I like the dynamic quality of being able to sing two different ways. I also wanted to flex my muscles as a vocalist and expand my own range—sort of a combination of self improvement and trying to keep things interesting. As for the shift in the subject matter, that has more to do with me as a songwriter figuring out what I’m good at and playing to my strengths. When I put out the Wandering Birds record, I thought the dark subject matter was gonna end my career, but the response was so overwhelmingly positive to this dark and fucked-up record, I took it as a sign. This will sound self-important and I apologize, but I’m a real student of songcraft, and everything I do, I try to use as a building block for the next thing I do. The Falcon record, I think, is the sum of the parts of all of the things I’ve tried and found to be successful in terms of artistic identity. I’m sort of rambling here, but I think I’ve found who I’m supposed to be as an artist. It’s just taken me longer than it takes most people.

SLUG: I’ve read that you wrote a lot for the new Falcon album. When you’re writing, do you find that some of your ideas might be better suited for some of your other projects, or do you write with the intention of creating a specific album for a specific band?

Kelly: When I sit down, I sit down to write an album. I had just written a Lawrence Arms album, and after we played the Red Scare 10th anniversary show, I knew when I was writing that it was for a Falcon album. We had played that show and it was inspiring, and we brought Dave aboard, and all of a sudden we had a lot of time on our hands, so I knew that I was writing a Falcon album. It’s not like I have three piles in my brain and write a song and then decide which band would make it sound best. It’s much more intentional than that. As a lot of people get older, they get shittier and shittier at this, and that could be something people think about me as well, but I think that I keep refining what I’m doing. It started with The Greatest Story Ever Told, and even Apathy & Exhaustion a little bit, but all of my output is thematic now. I don’t really do one-off songs, so if I’m sitting down to write an album, it’s almost like I’m sitting down to write a book. With that being said, I wrote so much shit for this record—I filled up an entire Moleskine notebook before I got the 10 songs that ended up on the album, and the longest one is only two minutes and 10 seconds.