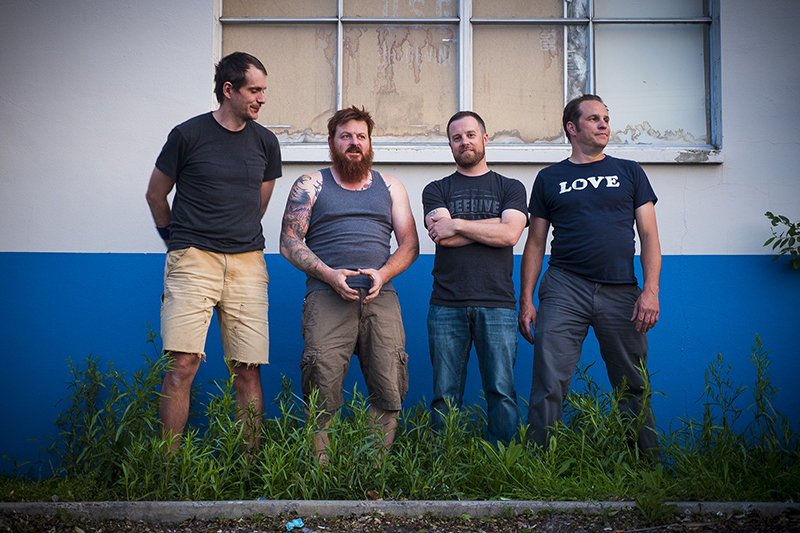 Form of Rocket will re-emerge after four years of inactivity to blow the top off of Kilby Court this Saturday, June 11, for Crucial Warmup Pt. 1 with Baby Gurl and Worst Friends. That’s not enough Form of Rocket, of course, so they’ll also play Crucialfest 6 at Urban Lounge with Elephant Rifle and Cicadas. To boot, the band will release their debut album, Se Puede Despedir a Todos, on vinyl for the first time as a limited release. These shows will instill even more fond memories of these local math rock darlings—and to prepare, Form of Rocket asked their Facebook followers for their first/best/worst/favorite FOR memories. Here’s what Form of Rocket guitarists Curtis Jensen and Peter Makowski have to say in response:

Jensen: Tyler gets excited when he plays the drums, as he should.

That show at Rock ’n Java in Layton was nuts—maybe 2002 or 2003. I grew up a couple miles away. It was strange to play a show in Davis County with piles and piles of kids. The space was an old, big, empty, cinderblock space across the street from the parking lot where, legend has it, a scene from Life Less Ordinary was shot. I saw the snare arc through the air and flatten against the wall.

After the show, outside hanging out by the van, we heard someone’s cell phone play Peter’s goofy guitar line from My Name is a Killing Word as a ringtone. We all looked at the kid, and the kid ran off.

Makowski: Tyler getting angry and breaking shit was a regular occurrence and something to be expected, to be honest. It made playing live exciting and unpredictable, for the audience and ourselves. Tyler is all or nothing. You get the most solid, precise and amazing live show, or a complete and total meltdown. It’s a gamble. Tyler’s antics are an essential part of the band. You get what you get and you never know what that will be. And I wouldn’t have it any other way.

Jensen: The no-microphone thing was an accident: When Form of Rocket first got going, no one wanted to take on the role of designated singer. A

s we’d practice, Peter and I would get wound up about the songs and sort of shout jibba jabba over the top of the music. This turned into running into the crowd without mics and screaming at everyone, and over time, some of the stuff we were screaming got repeated and formalized.

Makowski: I had no idea what I was doing. We never set an in-band standard for vocals, so Curtis

Jensen: When we went in to record Se Puede with Andy Patterson, we had vocal parts, but only a few set lines figured out. Some of the songs had youth-crew shout-along parts that we’d planned out, but more than half of the lyrical content on the record was either unplanned or simply noises and squawks we’d yell over top of the music.

My lines in “Loving Her Was Easy” were just stuff I’d improvise based loosely around a goofy story I read in a tabloid. “Guardians of the Ass Fortress” had a bit of thought behind it. “My Name is a Killing Word” was built out of a pretty bad poem I wrote in an undergraduate creative writing class at the University of Utah, and for “Shut the Fuck Up  Rodeo,” I think we might have even written down some of the words in a spiral notebook. Otherwise, recording vocals on the first record consisted of me or Peter making shit up in the vocal booth as we went, and Andy Patterson reassuring us that what we were doing was OK.

Writing the lyric sheet for Se Puede was pretty tricky—I can remember going back over the songs and trying to fit words to the sounds I had shouted.

After Se Puede was done, a guy named Bob gave me a mixtape with the first Charles Mingus I’d ever heard. The shouting-with-no-mics-thing made more sense then.