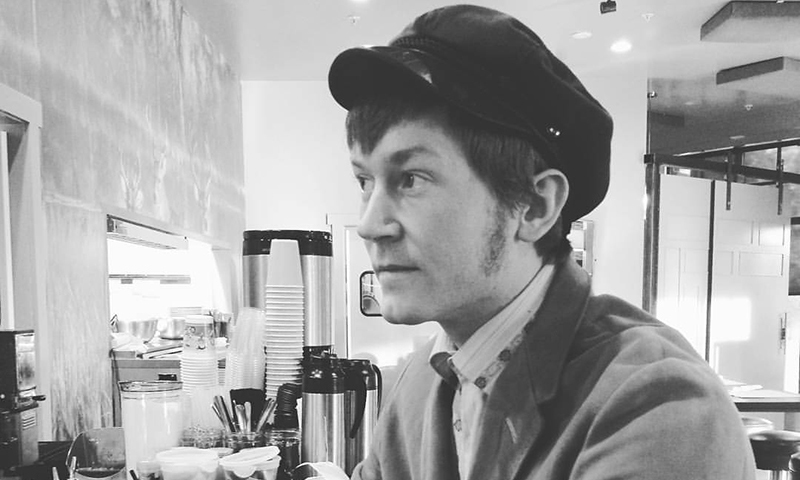 One year ago, DJ Nix Beat, (aka Nick Kuzmack) began spinning records in honor of holding an authentic, unique event consumed by punk, mod and glam rock that continues to be the inspiration for his everyday life today. The Freak Out was Kuzmack’s brainchild. Having traveled within and outside of the U.S. and getting to experience nights at bars filled with good music spun on vinyl accompanied by a beer or more from local watering holes, Kuzmack felt a void with such nights in Salt Lake City. He was determined to create an evening that he felt was necessary for musicians and underground music enthusiasts alike. Over the last year, The Freak Out has been a successful venture for Kuzmack, The Republican and event goers. Bar patrons are able to hear music that is rarely, if ever, played in SLC, and Kuzmack has enjoyed fulfilling his dream of having a night dedicated to punk, power pop and everything in between to be enjoyed by anyone and everyone that expects more than just the same 50 songs on rotation on the jukebox.

SLUG: What was the inspiration behind The Freak Out?

Kuzmack: In November 2014, I came back from a trip and posted on Facebook asking where I could go, have a drink, listen to good music and maybe even dance. At that point, there was nowhere to go—apart from DJ Feral Cat’s soul nights, which don’t happen often enough. The response to my question was laughter, as if the idea was a joke. So, as a budding DJ, I decided that I would start a punk and rock n’ roll night somewhere. After a year of slogging it out in the trenches with one-off gigs and opening for various bands, Ross Richardson—who was then the bar manager—asked if I’d be interested in doing a night at The Republican. I said yes and decided to call the night The Freak Out, after the song “Freak Out” by the Voodoo Rhythm Records’ band The Jackets.

SLUG: What are the genres of music you spin at The Freak Out? Why those genres? Kuzmack: I advertise that I spin punk, mod, glam and power pop, but sometimes I’ll bring out my garage rock, doo wop and rock n’ roll records. The reason I choose this stuff is because I like it. I believe every record collection should reflect one’s self, and what I spin is music that has spoken to me at one time or another and represents a sound I have needed to hear. At The Freak Out, listeners will be exposed to different kinds of music that comes from all sorts of genres and eras. I’ll spin older and newer bands like Los Saicos, Lene Lovich, Chin Chin, The Eyes, The Clash,  Giuda, Faz Waltz, Slade, Telegram, David Bowie, Purple Hearts, Cute Lepers, Ex-Cult, The Giant Robots or even The Booze.  I’ll also use cuts from compilations from Stiff Records, Girls in The Garage, Back From The Grave, Killed By Death, Bloodstains and Glamstains. That being said, I try to find the record on a 45 before I break out a compilation. It makes it more fun.

SLUG: What kind of DJ tradition do you continue with The Freak Out?

Kuzmack: Well, there’s the fact that I DJ by using a strictly vinyl format. This idea comes from the notion of being a part of a interconnected community of people who take care to cultivate all kinds of exciting music. Collecting records is an art. It’s a format that you have to pay attention to and care for. If not, you could lose that special artifact in your collection, and with some records, you may never see it again if it is damaged. Seeing a DJ night like this is cool because it’s not restricted to what’s on Spotify. Rather, what folks will experience at The Freak Out is music that is ungovernable and is provocative and easy to move to. With regard to some sort of tradition, it’s a DJ’s job to entertain but also to educate. That’s what the greats did, like DJ Jocko Henderson or the DJs who had pirate radio stations off the coast of the U.K. during the 1960s. They defied social norms, and in the case of the latter, opposed censorship to infect listeners with tunes that provoked one to move, groove and feel all sorts of naughty, angsty and rebellious—and that’s what I’m striving to do here at The Freak Out, or anywhere else.

SLUG: Why did you choose The Republican as the venue? Does The Republican represent a similar aesthetic to what you feel the vibe of The Freak Out is?

Kuzmack: Like I said above, Ross Richardson knew that I was DJ’ing around town and was interested. I think what piqued his and The Republican’s interest was how I threw my 26th birthday party. I had it there and invited several DJs I had worked with to come spin. Richardson dug it and asked if I’d be interested in starting a night. The Republican is a brilliant bar. It’s got character, and those who go there lack the pretentiousness that sometimes plagues other scenes. It’s very much a neighborhood pub, much like those I was familiar with when I lived in the U.K. These are the kind of characteristics that I think go well with something like The Freak Out.

SLUG: How often does The Freak Out happen?

Kuzmack: The Freak Out happens on the first and third Saturday of the month. Records start spinning at 9 p.m., and we go until we get chucked out.

SLUG: How often do you collaborate with other DJs for the event? Who are some notable DJs who you’ve spun with at The Freak Out?

Kuzmack: As often as I can—especially if I do a theme. Some rad cats I’ve had to grace the turntables include DJ Eric Jenson, Portland, Oregon–based DJ Andy Maximum (Andy Mehos), DJ Tall J (aka Jeremy Harmon), Wyatt Maxwell (Mad Max and The Wild Ones), the radical ’60s garage enthusiasts The Gruesome Twosome (Rex and Gravel Beaton of The Neumans), DJ Gimme Soper (Jared Soper of American Snot) and DJ Forgotten Boy (aka Josh Price of K-UTE’s Rock n’ Roll Radio Show, Primitive Programme and The Boys Ranch). When they come down, I feel The Freak Out really lights up, even more so than it already does.

SLUG: What kind of records can people expect to hear you spin at the event—especially at your one-year anniversary?

Kuzmack: I always only bring down the best LPs, 10”s or 7” records from my collection. No one at The Freak Out will ever be subject to filler, as I’ll leave that to the other bars to sort out. For this, I’ll bring aptly appropriate numbers by The Flys’ “Love and Molotov Cocktail,” The Adverts’ “Great British Mistake,” Newtown Neurotics’ “When The Oil Runs Out” or The Stranglers’ “No More Heroes.” But I’ve got some other treats in store for this night—you can count on it.

SLUG: What kind of clientele would enjoy an event like The Freak Out?

Kuzmack: Everyone. Really though, I think folks who are curious about music and culture might get the most out of a DJ night like this. This isn’t top 40 stuff, and what the DJs here spin at The Freak Out is the real deal. That being said, The Freak Out is an open environment, and I encourage everyone to dig these tunes. So come out all ye rock n’ rollers, mods, punkers, garage rockers and anyone else who wants to have a good time.

Kuzmack: I would like to keep doing this as long as folks are digging it or when I get tired of hearing my favorite records over the sound system. The latter I think will never happen. The future for The Freak Out is looking good, as we are a getting a following locally and folks elsewhere are starting to pay attention to us. I think that nights like The Freak Out are hugely important for the growth of the local scene and culture. Music has always been a very unique power that can stimulate and inspire the senses. Now, more than ever, we need all the positive stimulation and inspiration we can get, especially with the impending threat of global warming, the ongoing absurdity that is coming from the Trump administration and this nonsense within our own state legislature and from Governor Gary Herbert, who somehow thinks porn is a bigger crisis than our horrendous cancer-causing air quality. The Freak Out is a cool place to blow off some steam while figuring out the next step on how to act while listening to tunes, some of which I dare say are delightfully subversive.

SLUG: How is The Freak Out one of a kind in our city—in our state, even?

Kuzmack: Whenever I travel, I always seek these kind of nights in other cities. Here, when I go out, I want the full monty. I want to feel fulfilled with good music and drink or food. It’s with this idea that makes The Freak Out something else. You’ll always get the best. No one else is really doing this kind of thing here, and if they were, I’d be at their night. This is an event that is very much a celebration of our respective subcultures and is an excuse to go out and have a good time. An all-vinyl DJ night is an exposition of the rich cultural history that come from punk, mod, glam or whatever. Nights like these things are put on by people with an in-depth knowledge of musical history, one that has taken years to learn. I am proud to say that the DJs I work with are such people, and this city needs more of this kind of thing.

SLUG: What excites you the most about running and DJ’ing The Freak Out?

Kuzmack: It’s a combination of playing my records through The Republican’s sound system and seeing folks get excited about the tracks [that] they are hearing. I always love to hear how much someone is enjoying hearing the music at my night. It is a total game changer.

P.S. I want to give special thanks to everyone who has participated with The Freak Out over the last year, especially our guest DJs mentioned above, Ross Richardson, the awesome staff at The Republican, Republican owner Jason Meik and to Shane Kiel, Jeremy Harmon and Kristin Thomas for designing the posters we have used for the event—particularly Thomas, whose [poster] is the one we still utilize.

Join DJ Nix Beat and his special guest, DJ Forgotten Boy, this Saturday at The Republican. Records start spinning at 9 p.m. and go all night. Rest assured, every record has been handpicked by Kuzmack. There will be no fluff—just raw, gritty tunes that are perfect to drink pints to. There is no cover, so there is absolutely no excuse to miss this night. Salt Lake City, let’s pretend there is an escape from the smog and dance the night away on Saturday. See you there.