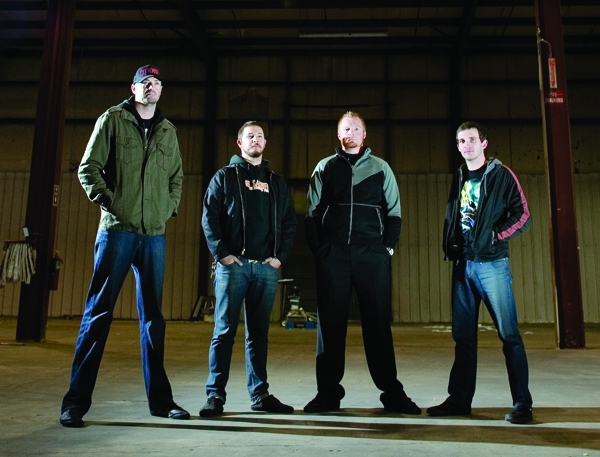 Gaza is not an “anti-“ band. Anti-religion or anti-Mormon, anti-meat or anti-you, Gaza is none of these. The group is more about things than against them. Pro-thought, pro-self-interrogation and -exploration—an important point to make when your latest album has a title more attune with atheist leanings. He Is Never Coming Back notches Gaza’s belt as their second release on Black Market Activities (Guy Kozowyk of The Red Chord’s label) and third overall release. The “he” is John Stockton, lead vocalist Jon Parkin jokes but then clarifies with a serious note: “The theme on the record is a loss of patience, and sugar-coating the religious discussion. I wanted to call it what it is. If it’s delusional, it’s delusional. To us, it was a tongue-in-cheek rally cry.”

Fortunately, this is what we’ve come to expect from a band named after the most consistently violent area in the world (the Gaza strip in Israel/Palestine for those who slept through world history). “We went with Gaza for a reason: it’s a religious warzone and has been. It’s a great example of the extremes of the bad things religion can bring,” Parkin says. The group has gained national and international notoriety as a heavy rock band with ideals and many a moniker attached to their style, but the guys pretty much say what they think and play whatever they want—including some occasional “softer” interludes. “It makes records flow a lot. Plus, that’s just who we are,” guitarist Mike Mason says, which is fitting for a band originally formed with indie/emo aspirations. “That stuff still shows through to this day. I’m honestly kinda proud of that,” drummer Casey Hansen says. “I love being brash to be brash but it can be a lot more powerful if you can have breaks in something else and then be thrust back into it.” Parkin continues the explanation, “It is funny to say but it’s emo-driven music. Emotional: it used to be these sad bands that came out of the Midwest singing about cornfields and the way the snow looked in December—it was a different thing,” he says, separating the original term from the pop movement it became. “It meant emotional, not cry-baby,” Parkin says.

Gaza has always been a unique facet in the Utah scene, and more well-known outside of the state. They enjoy playing here, but receive better crowd response in places like Denver, Philly, Indianapolis and Boise, of all places. “We’ve never expected to draw people here,” Hansen says. “I think we have a reputation nationally that’s bigger than our local reputation. Most venues won’t have heavy music, kids won’t come and it’s embarrassing even to try.” Hansen looks pained as he continues, “You bust your butt and nobody comes. I [booked] a couple of shows and I can’t do it anymore.” That still doesn’t change the guys’ attitude about representing their hometown (find my all-time favorite Gaza Jazz-logo shirt online for confirmation—still some of the best local band merch available). “We’ve made such an attempt to take and show what Utah has to do on a national level. It’s all been local, every bit of it other than mastering,” Parkin says. Andy Patterson has engineered all their releases in Gaza’s hometown of Salt Lake City, and the band is proud of that fact.

Gaza isn’t all God-hating, abrasive, balls-to-your-brother’s-chin music all the time—the gents are really well humored. Spend over an hour with the group and they’ll start discussing what kind of trees they would be, (bassist Tino Lucero: “a brown one,” and Jon, a rare and illegal Teak), or alternate album titles they might use one day (Stretch Marks on Our Asses ‘Cuz We Go So Fast being one). They also joke about polka music and there’s a few good-natured jests about orgasms—apparently one should yell the word ‘travesty” when reaching one’s pinnacle (there’s a good long story about a moment in a tour van backseat at three in the morning with Parkin, an unfortunately curious Hansen, tube socks and travesty—but it’s a bit too risqué for a family publication like SLUG). There is also talk of a European tour on the horizon, a US tour and a return to their now regular festival slot at Dudefest in Indianapolis next year.

After jokingly apologizing for the worst interview ever—which it definitely wasn’t—Parkin unleashes another pearl, as he does quite frequently, starting with a question about their album: “Can we have a discussion on a fair plane? He Is Never Coming Back is enough of a statement growing up here in this religious town—being ‘blasphemous,’ it feels good to say it,” Parkin says, then clarifies by saying, “This isn’t an anti-Mormon thing. Call it a soapbox, or whatever, but we worked our way up on top of the soapbox so why not shout from it?

He Is Never Coming Back will be released on Black Market Activities in early Nov. If you haven’t seen Gaza live, don’t miss their CD release show Nov. 7 at the Taylorsville Graywhale or when they play with Earthless and Baroness on Nov. 30 at Club Vegas.