Skip to content
MENUMENU
Alex Rosamilia is an extremely accomplished guitarist and works on everything from the music with The Gaslight Anthem to metal happenings of Something About Death or Dying.

Geeking out with Alex Rosamilia of The Gaslight Anthem 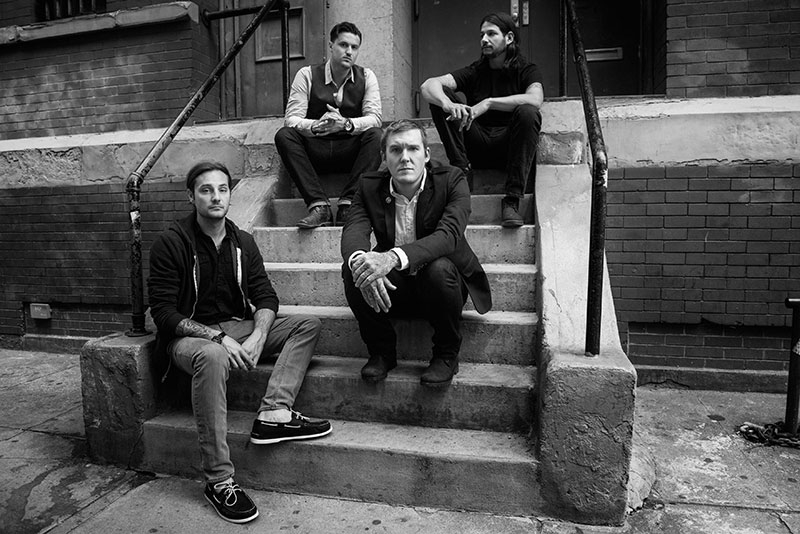 Alex Rosamilia talks anime, comics, video games and writing music with The Gaslight Anthem. Check them out at The Depot on March 23! Photo: Drew Gurian
Alex Rosamilia is an extremely accomplished guitarist and works on everything from the music with The Gaslight Anthem to metal happenings of Something About Death or Dying. His subtle intellectual charm comes across in his music and friendly demeanor. He was kind enough to humor this SLUG writer recently with a few words and I am more than happy to share them with you.
SLUG: Hi, this is Ben from SLUG Magazine what are you guys up to? How’s the road?
The Gaslight Anthem: We’re actually doing a sound check right now in Baltimore Maryland.
SLUG: So while I was internet stalking you, I noticed you have photos of Skeletor, Voltron and Cloud (Final Fantasy VII) figures, so is it safe to assume you have some geek tendencies?
The Gaslight Anthem: Ha, yeah a bit. The Voltron stuff was from my childhood and so is the Skeletor stuff, but recently I’ve started collecting them again. I collect a lot of the Final Fantasy stuff too. I’m a geek on all fronts.
SLUG: What was your favorite show growing up?
The Gaslight Anthem: As a kid growing up I really liked Japanese animation. I drew a lot as a kid and Japanese animation was what led me to things like Voltron.
SLUG: Do you like any of the newer shows?
The Gaslight Anthem: Uhh, they’re getting a little weird. Especially since I’m older it’s getting a bit harder to follow, but I like Evangelion. It’s probably one of the best things ever. Lain (Serial Experiments Lain) and Cowboy Bebop are also great.
SLUG: What’s your favorite entry in the Final Fantasy series?
The Gaslight Anthem: Eight, I like the story. I like the story a lot. I was seventeen when it came out and I really related to Squall as a character. He was an introvert and that drew me to him.
SLUG: Over the years you’ve built quite the following with your music and touring. How would you describe your fan base?
The Gaslight Anthem: Honestly, the word that describes them best is “devoted.” They’ll come see us play five or six times a tour and follow us almost like the Dead Heads used to with the Grateful Dead. When I talk to the fans outside the show, some of them have been to like forty shows. I’ve never seen that before. I’ve never seen a band that many times.
SLUG: Do you guys play a different set every night?
The Gaslight Anthem: Yeah, we change it every night. We noticed the same kids would keep showing up, so we had to change it because we didn’t want them calling us out. So that’s how it started with the different sets. It’s kinda fun. Keeps us on our toes too.
SLUG: What venues are your favorite to play in?
The Gaslight Anthem: I really don’t know. I feel I go more show for show than venue to venue. I’m a fan of some of the older theaters and buildings built in the 1920’s. I think they look pretty.
SLUG: I always picture you guys playing in low key bars, crooning blue collar workers on hard times for free beer.
The Gaslight Anthem: Yeah, we started that way. We definitely used to play for free pitchers of beer and a percentage of the bar.
SLUG: So what’s your process for creating an album? What is The Gaslight Anthem formula for awesomeness?
The Gaslight Anthem: We really do it differently every time. One time we’ll do it one way, another time something else. Usually Brian Fallon will come with the song progression and music, then we fill in the rest. With the song “Even Cowgirls Get the Blues,” Fallon wrote the lyrics after I wrote that guitar bit, so it really depends.
SLUG: Now on your last album, Handwritten, Brendan O’Brian (Pearl Jam) was your producer and with Get Hurt, Mike Crossey (Arctic Monkeys) was your producer. What would you say are the differences between the two?
The Gaslight Anthem: I would say they’re probably polar opposites. Brendan’s like, “If you want to sound this way, then we do it this way.” He’s perfected it. You want the rock sound you use this guitar, this amp, etc. Mike’s more like, “Let’s see what happens when we do this.” You record it and you’re like, this sounds cool or you’re like hmm, let’s try something else. So they come from totally different angles.
SLUG: I saw online that you collect vinyl. What was the reason behind starting the collection?
The Gaslight Anthem: I liked that the artwork was bigger and my friend used to DJ at a record store and he’d give me records, so that got the collection going. I used to get lost in that stuff. I still try once a day to put a record on and listen to nothing else. I really don’t think people do that enough anymore.
SLUG: I hear your favorite album to listen to is Disintegration. What’s your favorite non-Cure album to listen to on vinyl?
The Gaslight Anthem: Uhhh, Fleetwood Mac, The Pious Bird of Good Omen. The song “Black Magic Woman” is on that album before Santana’s version. They used to be way more of a blues rock band. I probably listened to that album three times last week.
SLUG: Is there anything you’d like to let your Utah fans know before you come out?
The Gaslight Anthem: Yeah. Thanks for coming to the show! That’s about it.
SLUG: Well, we look forward to seeing you on March 23rd at The Depot. Thank you so much for talking with us.
Photos: