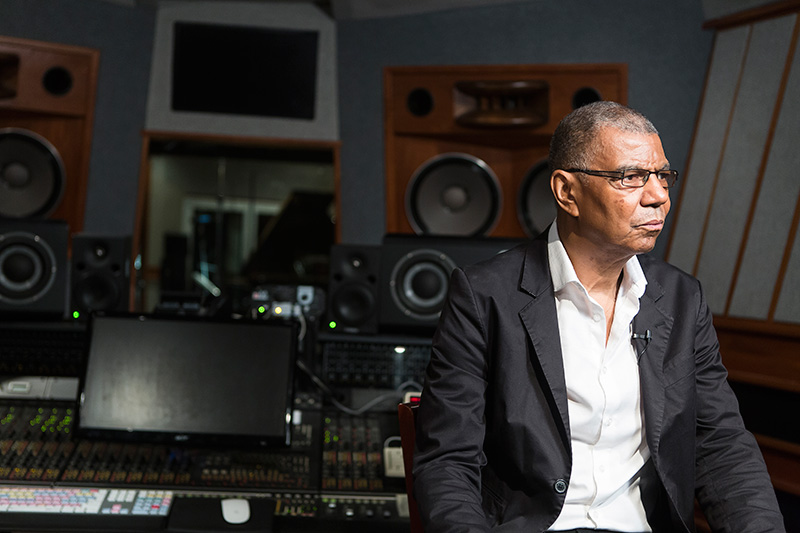 Getting the Beat Right with Jack DeJohnette

All photos courtesy of William Semeraro. DeJohnette kicks off a tour with world-renowned tap dancer Savion Glover on Monday, Dec. 14 at Capitol Theater, where the two masters will combine rhythm and dance into an evening of improvisation. “Dancing is drumming,” says DeJohnette. “Drummers have become tap dancers, tap dancers have become drummers. It goes back and forth … Anything I play, [Glover] can play back and vice versa. That’s why we’re such a great team.” The two have built a quick rapport performing duets together, and next week’s performance will feature the culmination of their work together.

I put on Jack DeJohnette’s “Sorcery” the other day, and as I sat down and put my feet up, the room filled with noise—all of a sudden, I was sitting in the middle of a jam session. The drums were on my left, pulsing a relaxed tempo. Then, the bass picked up the groove and laid it back down real heavy. It was so raw—when I closed my eyes, I could see all the players bouncing behind their instruments. Recording a piece like “Sorcery” doesn’t happen all in just one jam session, though. It takes hours of building chord charts, working out harmonies, melodies and rhythms behind the scenes. “You can’t escape any of it,” says DeJohnette of creating music. When it comes finally gets time to play, though, Jack DeJohnette explains, it’s all about a creative headspace. “You’re opening up the channels to receive information,” he says. “You’re co-creating with the higher vibrations of consciousness … A lot of musicians get to that.”

You’ll find DeJohnette’s name on the back of plenty of records—Miles Davis’ Bitches Brew and Live-Evil are just a couple of seminal works that this guy has drummed on. No matter how experimental the record is, though, he just seems to know what to play. “You have to realize that, sometimes, we’re not playing a composition—it’s totally open,” says DeJohnette. “The thinking and feeling process happens in the ideas, in the spontaneity of the music, and in interactions with the other players.”

Jack DeJohnette hasn’t always been a drummer. His music career began behind the piano, and today, the renowned drummer still has his keyboard chops on lock. He even has a solo piano album coming out in April. “Piano and drums are part of the percussion family,” says DeJohnette. “There’s no separation. Learning one thing feeds the other.” Even DeJohnette’s kit is set up to resemble this connection. “I tune my drums to intervals so I’m thinking like an orchestra: pitches and sub-tones and all that.” Jack DeJohnette pays attention to detail that puts his work a step ahead of contemporary artists, and keeps him high in demanded for countless ensembles.

Back in 2005, DeJohnette started a record label called Golden Beams Productions. While he doesn’t record with the label anymore, he says that having his own label helped him put out exactly what he wanted to record, quickly. Today, Jack DeJohnette says, “There are no record companies—everything has moved online now.” As a result, experimental and innovative albums are further and fewer between. Dejohnette’s mind is constantly coming up with music. “Composition is always happening,” he says. “Whenever I improvise, that’s spontaneous composition. Often, musicians have a roadmap, but they’re improvising. There’s not a line between composition and improvisation—they overlap.” With so much music under his name, it seemed a wonder to me that every song sounds so distinct. “I improvise if I’m writing something,” says DeJohnette. “One idea leads to another, and it starts to flower—and it’s usually all pretty fresh. That’s the idea, right—to play something that hasn’t ever been written before?”

Whether he’s behind the kit, the keys, or the composition, DeJohnette knows what he’s doing. “You need to be good enough at your instrument that you can play something new every time you sit down,” he says. “Be around people who are musically creative, and don’t play clichés.” It’s not hard to take advice from someone who sits so comfortably behind his instrument, especially when he’s put down more fresh tracks than I can count! Monday night’s Jazz SLC at the Capitol Theater will bring together a wealth of rhythmic knowledge as DeJohnette and Glover take the stage and share their mastery.