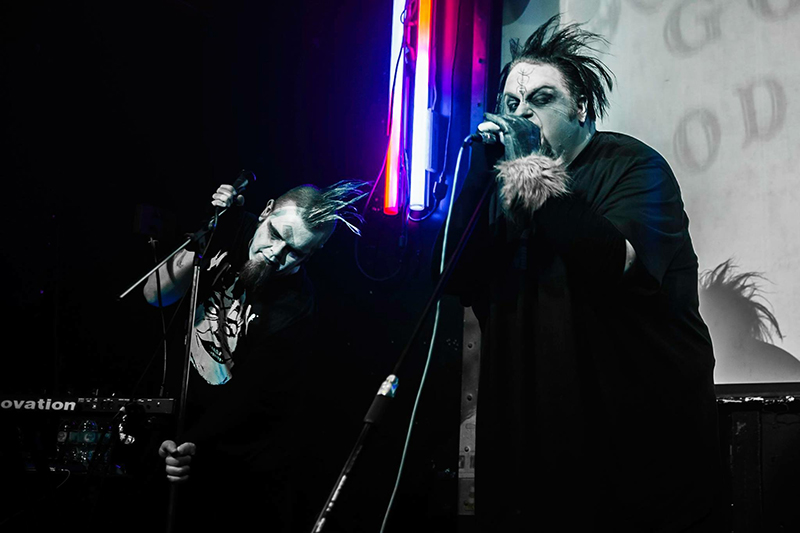 On Sunday, Aug. 20, God Module will be kicking off their Does This Stuff Freak You Out? Tour at Area 51, during this year’s Dark Arts Festival. God Module have been a heavy-hitter in the industrial music community for almost two decades with their creepy musical style. We took the icepick to the brain of frontman Jasyn Bangert. The artistic horrors and musical nightmares bleed out so easily—it was intriguing to see what has inspired him on his grisly path of creativity.

SLUG: When did you start creating music, and what prompted you to do so?
Bangert: I have been obsessed with music for as long as I can remember. My mom took me to my first concert in 1983 in Detroit. It was KISS with Wendy O. Williams and the Plasmatics. I think that night was when I decided that there was no other choice for me in life except make music. I started playing drums in some awful punk bands in high school. Then, about a year later, I sold my drum set at a pawn shop and bought a used Alesis HR-16 drum machine. From there, I went on the strange and frustrating journey of teaching myself how to make electronic music, which was hard as fuck without being able to just Google it. Kids today have it so easy. SLUG: Have you noticed a recent surge in older “industrial” acts touring? Why do you think this is?
Bangert: At first I thought it was interesting, but now it seems to [have] become a trend, and it is just annoying. I understand that for a lot of younger people or those that are new to the scene, it seems like an awesome thing to be able to see some of these bands that you thought you might not ever get a chance to see live. Yet, from my point of view as someone who saw most of them in their prime, what you are seeing now in most cases is just a watered-down version of what they once were. Of course, there are some exceptions to that opinion even for me. Bands like Skinny Puppy will always be amazing to see live. Ogre seem to get better with age. But the majority of these nostalgia tours don’t fall into the same category. Another problem with this is that they are helping to destroy what is left of the industrial scene by giving people even more of a reason to hold onto the past rather than search out new bands and helping to evolve this genre of music. If the only bands that are getting attention and drawing crowds are in their late 50s, I really don’t see “industrial” being too appealing to kids that are looking for music to identify with. This is one of the reason that God Module always tries to bring new bands out as openers when we tour. It would be nice to see some of these “older” bands to do the same more often as well.

SLUG: What are your feelings about the movement of the industrial sound returning to its roots?
Bangert: Personally, I have no interest in listening to some hipster kids that sound like a shitty Nitzer Ebb cover band in 2017. I love hearing people that take elements of old-school industrial and mix them in with their own sound, but this isn’t always the case these days. More often than not, these “revival” acts just sound like bad copies of good bands with awful production. I don’t know when it became cool to not know how to produce your own music or come up with your own sound in the industrial scene, but obviously, that’s where we seem to be.

SLUG: Your newest release is a retrospective on your music. Why did you choose to go in this direction?
Bangert: I never really wanted to do a “best of” release, but there are quite a few alternate versions of some God Module songs that are not easy to find on CD these days. So, to make it more interesting, we included a lot of these obscure tracks along with some of our more popular songs and some songs I always felt deserved more attention. I have been doing God Module for 18 years, so this gives people who may just be getting into the band a great place to start and an overall idea of what we have done so far.

SLUG: What is on the horizon for God Module?
Bangert: We are about to start a full 30-plus-date US tour for the new retrospective 2CD: Does This Stuff Freak You Out? Right after that, in early October, we will be performing at the 21st anniversary fest for the legendary Das Bunker club in Los Angeles. We also are doing a couple shows around Halloween in the Pacific Northwest, and we will be playing the Maleficarum Festival in Mexico City in November. After that, I plan to start to write the follow up to the last record, Prophecy. I am not sure if it will be a full-length or a series of EPs at this point, but we will release something new in 2018.

SLUG: What do you have in store for your devoted fans here in Salt Lake City?
Bangert: We are starting off our tour in Salt Lake City at the Dark Arts Fest! We will have a whole new stage show with new lights and props. The shows on this tour will be a bit darker, visually, than the last couple tours. We will be mixing elements of fetishism with the occult along with a musical set full of many of our harder songs.

SLUG: How do you keep in such close contact with your fan base?
Bangert: I have spent my entire life being a fan of so many bands. I just treat our fans the way I would want to be treated by bands I like. I never take the people who support God Module for granted. They allow me to do what I do, and without them, I would just be making this fucked-up music for myself in my bedroom.

SLUG: Your tracks—particularly “Let’s Go Dark” and “Undone”—strike me as some of the darkest out there. What kind of mind state compels you to create with this kind of feel, in this dark vein? Do you ever find yourself falling into a depression when creating?
Bangert: I have suffered from depression and anxiety since I was very young. The funny thing is that writing music is very cathartic for me. Rather than falling deeper into depression, I feel that by having an outlet to let all this dark shit out of my head, it helps me stay sane. Without it, I don’t know exactly how I would be able to handle a lot of the stuff that is in my mind from time to time. SLUG: It seems that a lot of your music is horror-based. Songs like “Spooky,” “Orange and Black” and “Beyond Fear” come to mind. How old were you when you saw your first horror movie? How did it make you feel? What was it titled?
Bangert: I am not sure what the first horror movie I ever saw was, but the first one I ever saw in a theater was Phantasm. I absolutely loved the fact that it scared the fuck out of me. For months and months I was afraid of the bathroom mirror, because I thought the Tall Man was going to grab me and pull me into it. This gave me my first glimpse into being truly affected by art on a mental and physical level. I still search for that type of reaction from film, music, books, etc. Not that everything has to scare me to be good, but if something can make me truly feel a pure involuntary emotion, then I think whatever it is has succeeded in doing what art should do.

SLUG: If you could work on a horror movie with anyone, who would it be with and why?
Bangert: That is a hard question, so I’ll pick two. They would be David Lynch or Clive Barker. Simply because their work has had the biggest impact and influence on me and my own art.

SLUG: What is the creepiest place you have ever been to?
Bangert: A few years back after we played a show in Salt Lake City, we stayed in a random hotel in Ogden, Utah. We used Hotwire so we didn’t know what hotel we would get, and it ended up being the Ben Lomond. I had the strangest feeling just walking into the lobby to check in but things just got worse from then on. I could not sleep most of the night and just had the worst, most uncomfortable feeling I can recall ever having anywhere. When I did sleep I was plagued by nightmare after nightmare until I finally just got up and went and sit in the living room area of the room until everyone woke up the next day. It was overall the creepiest place I think I have been inside for any amount of time. Of course at the time, we had no idea of any kind of stories about the hotel. After looking into it there have been accounts for many years about the property being haunted.

SLUG: What scares you?
Bangert: “The possibility that love is not enough.” –Major Garland Briggs

Aurelio Voltaire, Aesthetic Perfection, Bella Morte and Blakk Glass are just some of the touring artists that will be joining God Module for the festival. Tragic Black, Image Down and many other local artists will be there as well. You also don’t want to miss the seductive and slightly obscure dance performances and other dark art that has been prepared for you. Feel free to feed the deep, dark aspects of your souls with a festival for the macabre—a divulgence into the tempting, tantalizing and tormented. The Utah Dark Arts Festival will run Aug. 17–20. You can purchase your festival ticket or just a single day pass at AhaTix.com.