00:00 / 15:25
Spotify Stitcher
RSS Feed
Share
Link
Embed
If it’s nighttime in Salt Lake City, Justin Godina is working hard on some Technics—either DJing as he does at residencies, six nights out of the week, or in his basement fixing the broken mechanisms that make the workhorse tables of the industry tick. His instrument is the 1200s, and he’s known as the  “Mad Scientist of the 1200s,” after the infamous Technics SL-1200 turntables that he both plays on as a DJ and repairs as a hobby. 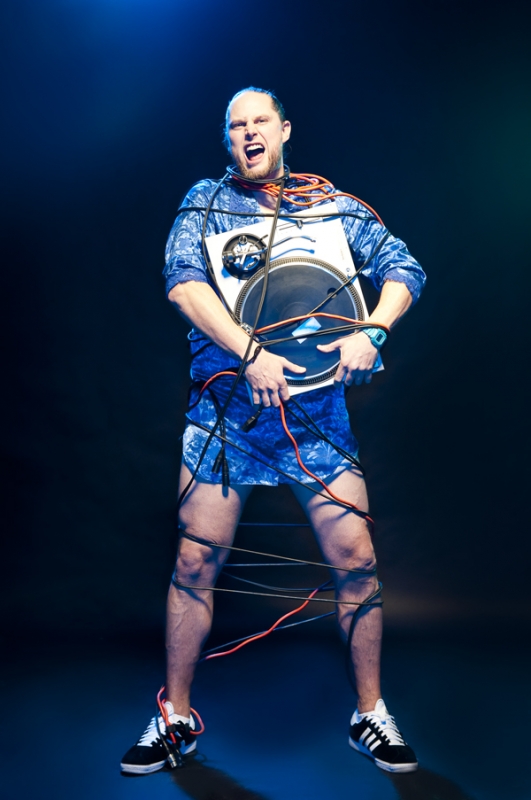 If it’s nighttime in Salt Lake City, Justin Godina is working hard on some Technics—either DJing as he does at residencies, six nights out of the week, or in his basement fixing the broken mechanisms that make the workhorse tables of the industry tick. His instrument is the 1200s, and he’s known as the  “Mad Scientist of the 1200s,” after the infamous Technics SL-1200 turntables that he both plays on as a DJ and repairs as a hobby. A scientist and a rarity in the local scene, Godina is like a modern guitarist/luthier—except he spins funk and soul, not flamenco, and his wood instrument is made of solid metal and direct-drives.

That kind of precise dedication is key in bringing the party to the people as Godina will for SLUG’s Blue Dress Birthday Bash at The Woodshed on February 17 (9 p.m. $5). If you can’t catch Godina at our birthday party, find him at Bourbon Street on Sundays, Bar X on Mondays, The Garage on Wednesdays and the rest of the week at Maxwell’s (Thursday, Friday and Saturday). This local precision master and fav DJ went to West High School and did regular kid-type shit, skateboarding and basketball, and didn’t get into too much trouble with turntables until later in life. But he had his first brush with needles and wheels early on. “When I was four, five or six, I would play disco records before my aunts and uncles went out dancing,” Godina says. “I got familiar with the hit songs and how to play records.” This was a recurring theme, it seems. “I’ve always been the guy at the party screwing with the CD player or trying to be in charge of the music,” Godina says. Thankfully for the world, Godina chose another ’70s music genre to focus on besides disco—soul and funk—and has been professionally DJing for over 12 years. He recalls the moment he knew he wanted to be a DJ when he heard the scratch on Herbie Hancock’s “Rockit,” a familiar story in the annals of DJ lore. It inspired plenty of kids to ruin their families’ sound systems, as Godina did on about 15 to 20 of his relative’s needles, attempting a “scratch” when they weren’t around.

Godina’s kids are about the same age as he was when he started fiddling with turntables. And unlike younger, greener DJs, Godina isn’t getting blotto every night. His six-year-old, three-year-old and his wife “keep him in line,” he says with gratitude. He used to be a “professional drinker,” Godina recalls, but he’s had a slight reformation. Once the kids go to sleep, however, Godina goes into beast mode—at the clubs, or in his basement, tinkering with his machines—he’s on another trip, entirely fueled by passion for the game. “I’ve done 50 tables in the last three months—whether it be switching RCAs or internally grounding them,” he says about his 1200s repair/mod work. Fortunately, he still has plenty of time to play out when he isn’t raising his kids (doing “daddy day care” as he calls it) or fixing 1200s. Part of that time is spent spinning 45s (or 7”s) —Godina has been obsessed with mixing them lately. He had just 20 a year and a half ago, and now he holds over 1,000. Godina spends his time digging in the crates at Randy’s Records and at ReSpin Records in Taylorsville, trying to find that perfect funk line.

In case you thought record stores were a thing of the past, Godina and a local cadre of cats keep it old school. “There’s a collection of DJs playing vinyl records. When we play The Garage [Soul and Funk night] there will be eight guys that come out and play records. There’s myself, Chase [One2], Finale, Sneaky Long, other Chase [Street Jesus]—we’re out there,” Godina says. Though soul and funk is a particular genre, Godina says, “It’s not for everybody, but there’s definitely a love for it. I think a lot people recognize a sample they’ll say, ‘Oh, there’s that A Tribe Called Quest sample.’ … Since the invention of Serrato [the do-it-yourself, cookie-cutter DJ computer program] everybody’s a DJ, but everyone plays the same stuff: the new top 40 recyclable song of the week. There’s something to be said for playing records—I personally enjoy it a lot more. When you’re playing on Serrato, you’re looking at a waveform you don’t even need headphones, you just connect the dots. It’s something being lost in a lot of the younger generation of DJs. Give them two records and see if they can put them together without looking at a screen.”

Fortunately, Godina will bring his old-school record spinning skills and his extensive music library for SLUG’s birthday bash. This guy works sans setlist and moves with the crowd, and while he plays songs by artists like Michael Jackson and Run-D.M.C., he’ll still play more modern fare. Occasionally Godina will throw on some deep-cut favorites from The Gap Band and Bobby Bland. You’ll just have to show up to find out what he’s got in mind for us on February 17.