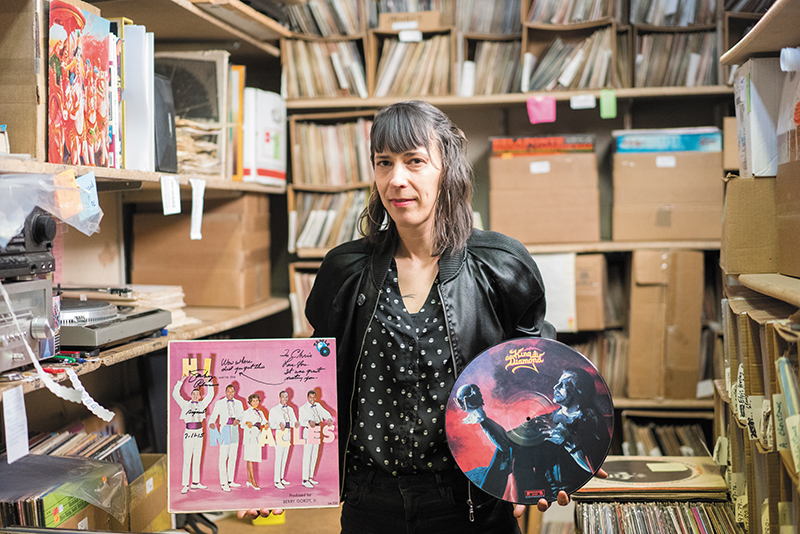 Bad news: Your grandma’s dead. Good news: You’ve inherited box after box of her dusty old LPs! Score! You’ve seen the vinyl displays at the front of Urban Outfitters and Barnes & Noble, so you know that vinyl is a hot commodity—Fleetwood Mac and Led Zeppelin reissues are big business. Your grandma’s taste in music wasn’t exactly “cool,” but she probably has some Carpenters records that you can pawn off on some suburban hipster, right? Well, maybe. “A record is worth only what someone else is willing to pay for it,” says Paul Kennedy, Editorial Director of Krause Publications. Kennedy has been dealing with vinyl for a long time, and Krause Publications has been publishing the Goldmine Record Album Price Guide since 1997. He knows that Granny’s Lawrence Welk albums are garbage. A common misconception among new collectors (or those looking to make a quick buck off old junk) is that “Because something is old, it is valuable,” or, “Because something is popular (i.e. Michael Jackson’s Thriller), it will make them instantly rich.” These misconceptions and record dealers with wild prices led to the creation of the Goldmine guide nearly 20 years ago. “When we started out, we started soliciting information from collectors and dealers all over the country, and they fed us information,” Kennedy says. “It was a grassroots effort.” The Goldmine database now features comprehensive information on over 300,000 records, including catalog numbers, year of release, regional differences and reissue information. All that knowledge is well and good, but the most crucial aspect to the Goldmine guide is the listed value of these records. Enter the Goldmine grading system.

After scrounging the usual Internet suspects (eBay, Discogs, etc.), you’ve seen “NM+++,” “VG,” “G–” and other variations next to listings of Goodbye Yellow Brick Road, but what do all those wacky letters mean? You didn’t even know you were looking at the widely adopted grades from the Goldmine guide! According to the guide, there is no such thing as a mint record. Once you open it, you’re lucky if there’s a near-mint (NM) record inside, especially if it’s an older record. The price listed in the Goldmine guide is based on near-mint records. From there, the guide drops down to very good-plus (VG+) records, which might have some scuffs that don’t affect playback; very good (VG) records, which have some scratches and sell for 25 percent of a NM record’s price; and then the lower grades: Good (G), which are around 15 percent of a NM record, and Poor (P) or Fair (F), aka garbage. “Grading is the most difficult thing for collectors,” Kennedy says. “We try to lay some ground rules and make it as scientific as possible, but at the end of the day, it’s subjective.” By now, all of these variables and the extra knowledge that you’ve accidentally acquired is burning you out, so you need an expert to assist you. Chris Copelin, the store manager at Randy’s Records, is just the expert you need. She can tell you how much Grandma’s copy of Neil Young’s Harvest is worth, and she can even sell it for you! “On average, I bet we see about 300–500 records a day at Randy’s, although we only buy a fraction of those,” Copelin says. All of that record exposure has imparted to Copelin (and the rest of the Randy’s staff) a vast knowledge of vinyl. If you’re tired of playing the eBay game, a good, old-fashioned, brick-and-mortar record store will gladly take most of Grandma’s records off your hands. “The most obvious advantage [of selling records to Randy’s] is that you can sell the entire collection at once, instead of waiting for each record to sell individually online. You can get cash money on the spot!” Copelin says. “Also, selling online can be a hassle when customers are unsatisfied because they misunderstood the condition of the record.” You might think that Grandma’s copy of You Light Up My Life has sentimental value, but Randy’s will assure you that it is G– at best and maybe worth a dollar—looks like your eBay feedback just dodged a bullet.

Randy’s also takes care of a crucial part of the record-selling process: They actually listen to the records. This may seem trivial to some collectors or to those just trying to make a quick buck off of Granny’s years of hoarding, but to those actually interested in owning records for their intended purpose—you know, listening to them—this is a big deal. “I think that for people who grew up listening to digital mediums, there is something really appealing about having a tactile experience with music: taking the record out of the sleeve, reading the liner notes, opening up a gatefold jacket,” Copelin says. “I think it is extra satisfying to interact with music this way.” Kennedy echoes this sentiment about the Goldmine Record Album Price Guide itself. “The role that the print book serves these days is very much in line with the experience of vinyl,” he says. “By that, I mean it is a very physical experience. I’ll pick up this book, and suddenly I’m immersed not only in the history of rock n’ roll, but of recorded vinyl, and that’s a cool experience.” Copelin nicely sums up another advantage of vinyl: “Also, you can resell a record,” she says. “I’ve never heard of anyone selling back an MP3.”

Randy’s Records is located at 157 E. 900 S. in Salt Lake City. You can find more information about Goldmine and its pricing guides at goldminemag.com.