"For me, it’s like you’re damned if you do, you’re damned if you don’t—you can only write from the heart. There are people that heard our records when they were 16 years old and they heard it a certain way, and no matter what we record now it’s not going to hit them in the same way. All you can do is what comes naturally, and I think that that’s what we achieved with this new record."

Good Enough: Less Than Jake See the Light in 2013 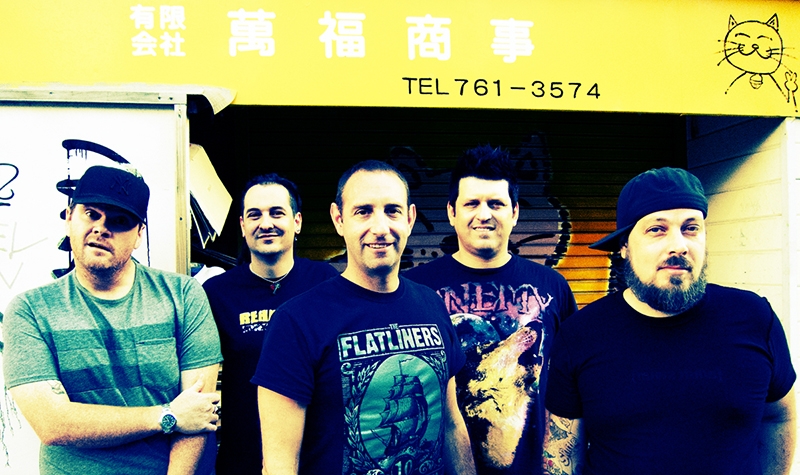 As one of the quintessential Fat Wreck bands, Less Than Jake fits the ska-punk persona of the record label with their upbeat music and equally cheerful attitudes. Going 21 years strong, the band returned to their hometown in Gainsville, Florida to enter into the writing, recording and producing process of their ninth full-length studio album, See the Light. The album has the band’s signature blend of ska with melodic punk that massages fans’ nostalgia for Jake’s old-school sound, which is what the band was going for. I had the privilege of talking with guitarist/vocalist Chris Demakes over the phone to get a few questions answered about their long-awaited album and the tour to support it.

SLUG: Let’s get started—on Fat Wreck Chords’ website, your bassist Roger [Manganelli] said that you went into writing your new album See the Light with an “old-school” approach. Do you know what he meant by “old-school?”
Chris Demakes: I think he was talking more about us sitting in our rehearsal space and working the songs out versus us just writing songs on our own and then bringing it to the table, or emailing MP3 files to each other of some songs we recorded. So this was more of a cohesive effort of all of us combined in one room, I think that’s kind of what he meant by that.

SLUG: How do you find new stuff to write about? I mean being a band for over two decades, how do you manage to keep it fresh?
Demakes: I think it mostly comes from the fact that we’re continually absorbing from experiences, and as you get older your perspective on things changes. For us, there’s always been something to write about, but we’ve always been a socio-commentary type lyrical band. We feel that there’s still plenty to write about and to be able to express ourselves.

SLUG: You’re still going to make sure that your fans won’t be getting the same rehashed shit from other albums, right?
Demakes: Well they gotta know it’s still you. For me it’s like you’re damned if you do, you’re damned if you don’t—you can only write from the heart. There are people that heard our records when they were 16 years old and they heard it a certain way, and no matter what we record now it’s not going to hit them in the same way. All you can do is what comes naturally, and I think that that’s what we achieved with this new record.

SLUG: Is this something that will set it apart from your previous records?
Demakes: I think so. If you’re familiar with the band and you put the new record on, you know who it is, I think. But production-wise, I think it’s our best sounding record.

SLUG: How do you think fans will react to it?
Demakes: Well so far we’re getting a lot of positive reviews from all of our fans, but some of the fans we keep running into are die hard Less Than Jake fans [laughs] and their opinion means a lot. Any complaints that we’ve seen are mostly online, and it’s mostly like “oh they suck now” or “they’re this or they’re that,” but we can’t help that, all we can do is write what we feel.

SLUG: In a recent interview that Manganelli did with The Aquarian, he said that the essence of this album was that you guys were coming full circle—that doesn’t mean that this will be your last album will it?
Demakes: No, I don’t think he meant that [laughs]. I highly doubt that this will be our last record. But maybe when he meant full circle I think he meant, like, how we went from an independent label, to major label, then independent on our own, and now we’re back with a pretty big independent label, which is Fat Wreck Chords. So that might be what he was talking about.

SLUG: Let’s talk about your tour—how’s it been going so far?
Demakes: Well we hit the first week mark and all is good. We’ve known the Anti-Flag guys and Masked Intruder guys for a while and we’re getting to know the opening band Get Dead. There’s really nothing negative to say except for we’re in Pittsburg and it’s a little bit chilly outside.

SLUG: Alright, last question—also on the bill for this tour are Masked Intruder and Anti-Flag. How do you like touring with those guys?
Demakes: It’s great! We’ve known Anti-Flag forever—we first met them when we went on tour with them in 2000, and we’ve done countless Warped Tours and shows with them over the years. They’re like family, they’re good people. Masked Intruder, we’ve known those guys for quite a while now, they’re a lot of fun as people on and off stage, and their band is great.

On November 24, Less Than Jake will be at The Complex playing their classic ska-punk songs, both old and new, to their die-hard skankin’ fans, with special guests Anti-Flag, Masked Intruder and Get Dead.