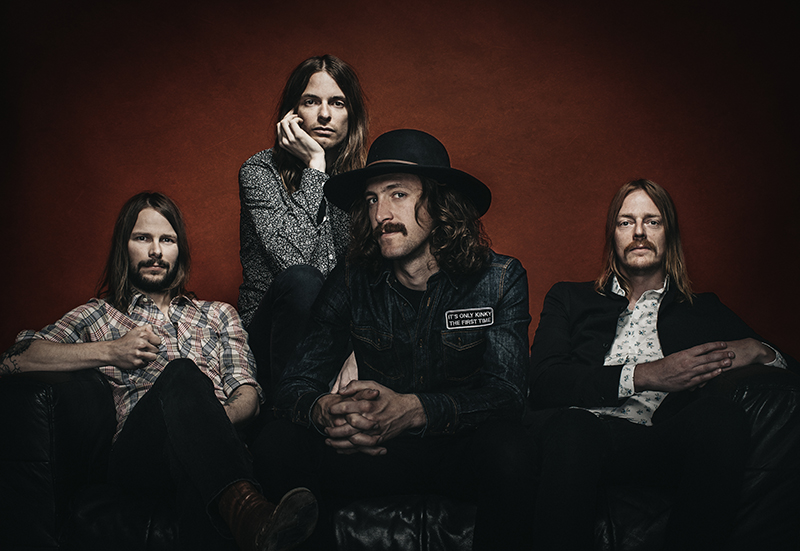 Truls Mörck, former lead guitarist for Swedish metal band Graveyard, had taken an eight-year break from playing with the band. His return has ushered in a new era for Graveyard in the form of the band’s most recent album, Innocence & Decadence, a towering performance in the band’s discography that hovers effortlessly over their previous work. For their brief North American tour this month, which includes a performance at In The Venue on Dec. 9, Mörck rejoins the band on bass, a change from his previous position as a guitarist. “It was a long vacation,” he says.

Innocence & Decadence is Graveyard’s fourth studio album and undoubtedly their tightest and most focused effort to date. The album features myriad tenacious bass rhythms redolent of Priestess circa 2006, layered with subtle references to proto-rock bands of the ’60s such as Blue Cheer. The riveting track “Cause & Defect” exhibits late-’60s and early-’70s psych-metal-band vibes while retaining a vocal freshness that can only be attributed to Joakim Nilsson’s unapologetic, dirty-rock singing style. Yet the album also dives fearlessly into a focused array of bluesy, operatic ballads—particularly on the album’s closing track, “Stay For a Song.” It’s a noticeably different album than their previous work—concise, bright and dripping with a dramatization that catapults the listener down a circular connection of audible highways, much like a continuous M.C. Escher painting in which the viewer finds himself entrapped within the maze.

“We have an unexpected connection to Escher,” says Mörck. “With the cover art for this album, we wanted people to ask, ‘What is this? What can this be?’ We wanted unexpected colors. We wanted it to communicate a feeling of surprise. It fits well with the title of the album.” With the aesthetically disorienting, maze-like artwork of the cover, it’s obvious that the band is expressing a pointed message. “We’re all trying to find our way through the world and sometimes we get lost,” Mörck says. “It’s a very cryptic place—life is a cryptic maze where you don’t know where you’re going.” This is indeed true of the album, yet for all its cryptic ideology, it also clearly hints at an existential philosophy. Many of the lyrics on this album point toward a belief system that rejects labels while maintaining a foothold in everything and nothing. On the track “The Apple & The Tree,” Nilsson expresses, “So sick of people telling us who we are / I’m neither, I’m everything and in-between / I’m nothing and I’m something that you’ve never ever seen.” The duality of these themes is fascinating, and it piques interest about the band’s general worldview. “We are continually trying to create a mix between telling a story and opening up our songs to question existence,” says Mörck. “It’s a linear theme. We are conscious about it—you can always use your experiences and be a product of everything while staying a relatively free and creative person.”

Perhaps it is this distinct cocktail of an embrace-all mindset and creative freedom that has led the band to experiment more openly, particularly with the instruments that they used to record on Innocence & Decadence. The band recorded the album in a legendary Swedish studio from the ’60s, which was formerly an old cinema. “The guy who works there is an old engineer who has been working there for 40 years,” Mörck says. “He’s totally into it—he even lives there.” There’s a refreshing sense of honesty lurking behind his words, peppered with a noticeably passionate undertone. “This studio we recorded in was crammed with old, eccentric historical pieces of musical technology, and we ended up using a lot of weird stuff on the album. On the song ‘Can’t Walk Out,’ we experimented with an old string machine called a Solina String Ensemble. This was a machine that Iggy Pop and David Bowie used a lot during their German era.” I’m completely fascinated by the band’s preference to use older pieces of equipment. It hints at a type of nostalgia that hearkens back to a pre–Digital Age, an age that fills the void that humankind’s obsession with all things digital has mercilessly dug. Hence, I’m particularly interested in one piece of equipment, a microphone that the band used to record on the album Hisingen Blues. “The microphone you’re referring to is called a Neumann Mic,” Mörck says. “It’s an old German microphone—we used it to record on this album, too.”

Given the band’s propensity for historical and retro equipment, one could objectively calculate that the band has also garnered what might be deemed a retro sound. “A lot of people have been asking us if we’re a retro band,” Mörck says. “I think it’s inevitable. You can’t really invent music again without repeating it one way or another. It’s always a question of how you choose your influences and the influences that you want to use. When you have a lot of listeners, you use the opportunity to say something important.” He pauses before quickly saying, “You think about what is the most important thing to say to thousands of people listening.” Be one of many witnessing Graveyard on Dec. 9 at In The Venue with Earthless—their live show is a spectacular performance showcasing some of Sweden’s most talented musicians to date.