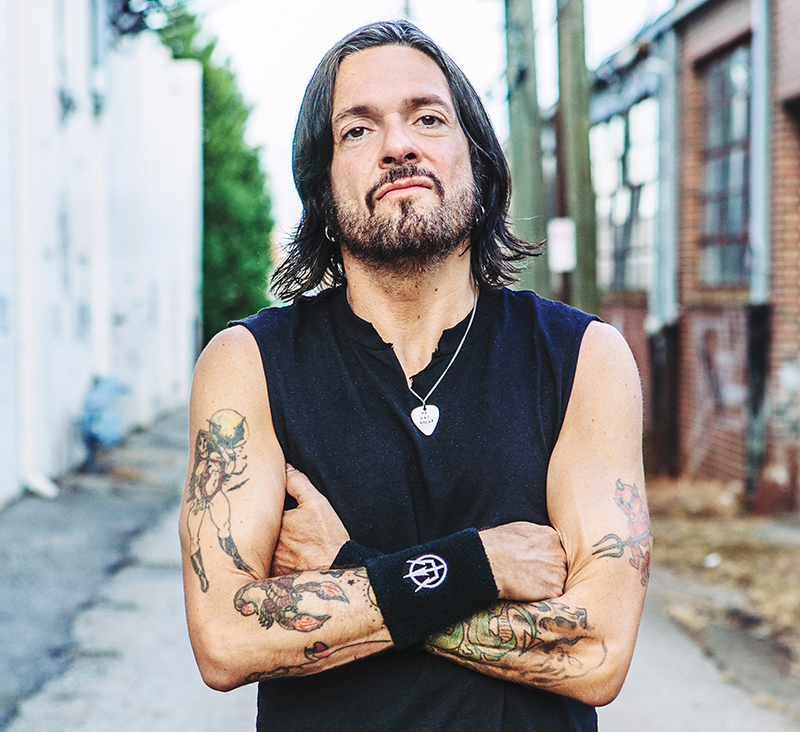 “Great power, great range, so deafening … More power, more gain, more mastery.” The lyric from Prong’s 2014 full-length, Ruining Lives, does a great job at describing what the New York crossover artists are about. Riff-and groove-heavy songs and subtle to prominent melodies give songs that catchy edge, and Prong have the power and the range and they still continue to develop their mastery.  You can see it manifest itself live on May 7 at the Depot in Salt Lake City, when Prong join Sepultura as support for Testament.

The band originated in 1986 with a huge pedigree of members that include Ted Parsons (Godflesh), Paul Raven (Killing Joke), Charlie Clouser (Nine Inch Nails) and so much more. The man behind the band, guitarist/vocalist Tommy Victor says, “I was a bass player in bands as a kid. I got thrown into the guitar player-role with Prong. So I always took a more percussive attitude towards guitar. Most is based on the rhythm, so I want that chunk and high end heard so I can play in my unorthodox way.”

Like a lot of people, I probably heard Prong through the radio with the song that broke the band wide open “Snap Your Fingers, Snap Your Neck.” It prompted me to go buy everything I could find from the band—the thrashy but defining, crossover-oriented Force Fed, the groove busting Beg to Differ. But damn, ’94’s Cleansing and the—love it or hate it—industrial-styled Rude Awakening were jams that I pounded out of the shitty speakers in my 1984 Buick Skylark in high school. I asked Victor about the success of “Snap Your Fingers.” While it’s a hugely popular song, after I got into the band, I found so much more. “It’s a killer song!” says Victor. “I’m very proud of it! Who wouldn’t be? We took some chances, and it turned out well. I’m glad we were bold enough to step out of the box.”

Tommy Victor working at the infamous CBGB’s in New York and being in the scene in NYC—including Lower East Side art rock—helped get him “zapped into the whole thing.” The three original members tastes were all similar, with influences ranging from Discharge, Celtic Frost, The Stranglers and Killing Joke. He reflected that it was just cool to fuse, thus Prong’s crossover style was born. That crossover style still relates today. “I still think it’s rooted in old new wave, post-punk and hardcore as well,” Victor says. “You may not identify it much, but it’s there.”

Prong disbanded for a period around 1997, but Victor kept busy playing guitar in Danzig’s band. He has brought Prong back with varying lineups since 2002. Victor also joined Ministry to play guitar alongside another guitar great, the late Mike Scaccia of Texas thrash Rigor Mortis fame.“ I brought up this extra experience and how it helped develop Prongs’s sound,” says Victor. “Actually, I had a lot of creative input in Ministry. Whether I was rewarded for it is another issue. I loved Mike as a person—he was one of the nicest guys I have ever played with. He was a killer lead player. Like I said, I’m a bit of an ignoramus when it comes to lead playing, so I really didn’t understand what he was doing.”

Prong released X-No Absolutes last year, and it’s the latest display of adding new elements to the classic Prong sound. Victor’s vocals in the beginning were usually gruff, with a bit of his NYC-accent panache. Over the years, he’s developed his singing voice, despite his saying he hasn’t done anything to develop his voice other than using it for so long. He also gives credit to Steve Evetts, the producer of the Carved into Stone album, as well as to the producer of his last two albums, Chris Collier. Victor says he needs guidance with his vocals and says that learning from doing has shaped his vocal sound. With X-No Absolutes released last year, Prong may not be considered the force they once were—no big Epic Records label deal like Prong had for the Cleansing album. So there is a lot to prove, but it’s all about the fans, and ironically, Victor says that those fans have mentioned that the No Absolutes album was like Cleansing revisited, which he agrees with. “It has a lot of post-punk roots in it as well as some real heavy stuff,” Victor says. “It’s a total Prong record. It has that right amount of everything.When it was done, I thought it was the best Prong record of all time. I’m still very happy with it. I must say that I’ve really tried my best with all the recent records to give the fans what I think they want—and also write songs that I like. All I can do is give it my all.”

With 10 original full-length albums and over 30 years of experience, Prong have not passed their prime. I actually hate but often adversely agree with the notion that most artists fade with age. There are always exceptions and Prong’s last three full-lengths feel more like prime cuts than regurgitated leftovers. Victor talked about how his most proud accomplishment with the band is the completion of 2014’s Ruining Lives—he notes that it was a crazy period in his life and that for it to get written and finished was a miracle. “Essentially, I see it as a message from God that I should still do Prong and be grateful for it,” he says. See Prong and their “great power” on May 7, with Sepultura and Testament at The Depot in Salt Lake City.